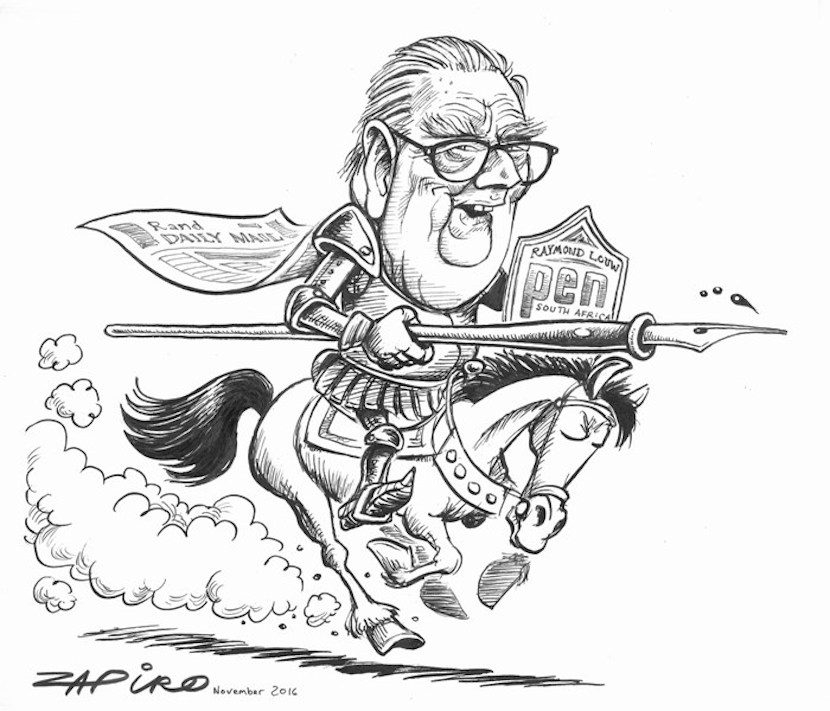 Some human qualities like integrity, fortitude, courage and determination to create a more equal society cannot be taught. You cannot secure a degree in such intangibles which former Rand Daily Mail editor, Raymond Louw, possessed in such abundance. His contribution through courageous and accurate journalism that promoted liberal values and equality during a time when an entire society was founded on their very opposite, was immense. He unconsciously shaped editors in his mould; Allister Sparks, Tony Heard, Richard Steyn, Kosie Viviers, the list is long and illustrious, all newspapermen who fought apartheid alongside their teams who were harassed, arrested and/or held in solitary confinement. They’ve left us with a rich tradition currently challenged (and enhanced) by the quick-fire instant, all-accessible and ubiquitous digital revolution where anybody can set light to perception and peddle fake news – and reach audiences with genuine revelations. Luckily the tradition which Louw and his RDM predecessor Laurence Gandar brought alive, has adapted to the new technology to help bring about the downfall of the State-capturing former ruling ANC Zuptoids. Whether our politicians like it or not, South Africans remain well-informed. First published on the Daily Friend. – Chris Bateman

Distinguished journalist Raymond Louw, acknowledged in South Africa and abroad as a preeminent fighter for freedom of expression, died in Johannesburg on 5 June.

His life’s work was exemplary, his impact profound.

Louw was born in Cape Town in October 1926 to humble beginnings.

Not unlike his father, who began as a clerk in the railways but ended his career as the Personnel Manager of the South African Railways, Louw worked his way up from the bottom.

In 1944, at 18, he started out as a lowly ‘copy boy’ – whose task was to take typed stories from one section of a newspaper to another – at SA Associated Newspapers.

Two years later he became a reporter on the Rand Daily Mail at a time that has been described as a critical period for the paper, when legendary editor Laurence Gandar began shifting the RDM towards being the leading voice of liberal opposition to apartheid.

After marrying the love of his life, Jean, Louw moved to Britain in the early 1950s, working for the next six years on newspapers in Sussex, Cumbria, and London. He returned to the RDM as news editor in 1960.

A giant has fallen. RIP oom Raymond Louw. 24 hours after his wife, Jean. Privileged that I could have learnt from someone who dedicated his life to press freedom. We shall continue to carry the torch. ✊🏽 @SAEditorsForum

Louw’s career was propelled, inadvertently, by John Vorster in the mid-1960s. Given editor Gandar’s hard editorial line against apartheid, Vorster wanted Gandar out in order to blunt the resistance, and (almost certainly) went as far as orchestrating an attempted newspaper coup through backchannels.

This backfired after Gandar’s team threatened to quit. The upshot was, rather than resign itself to intimidation, the board reinforced the RDM’s integrity by elevating the formidable Louw to Gandar’s side, thereby sending a very clear message: we will not soften and we will not quit.

When Gandar left the RDM in Louw’s safe hands – he was editor from 1966 to 1977 – the newspaper was by far the most reputable and hard-hitting in the country. But Gandar had been described as socially aloof and recondite, and the paper remained less popular than its rivals. When he took over, Louw’s passion did not rest, within or outside working hours, in spreading the contagious wisdom of egalitarianism.

A gifted raconteur, Louw moved with ease in many circles, and in leading by example, he dispelled the fear that not only would egalitarians not simply be ostracised, but showed quite the opposite: non-racialists could lead, widening circles that rippled across society, just as he did.

At work, Louw drove himself and his team with grit. In colleague Allister Sparks’s words, he ‘invigorated’ the RDM’s investigative team, making it ‘the most dynamic and penetrating in the country’.

The RDM was world-class under Louw. Crucially, the combination of his own kind of proselytising and the invigorated news team made the RDM not only the most ethical, but also the most widely circulated daily paper in the country too. This was vital to progress.

The influence was immense and so was the fight back. Louw knew State harassment first hand. His investigators were hounded and his sources silently hunted. But he did not cower or compromise; he put facts on record and held the editorial line.

Some great memories of @RaymondLouw on the media and broadcasting freedom frontline. Here he is with me and #SollyMokoetle taking on Prof Christo Viljoen, SABC Chair, as part of ‘Jabulani: Free the Airwaves’ conference Holland 1991. A fighter of note. 👊👊👊#RIPRaymondLouw pic.twitter.com/TxUnicepJm

Louw knew that fearless journalists needed potent allies. He helped establish and went on to lead the Media Defence Trust to protect reporters from apartheid assaults on free speech. He is remembered by many as ‘Mr Press Freedom’. After his tenure at the RDM, he continued to do award-winning work, and remain engaged in the most pressing national issues. In the late 1980s, he was part of a delegation that met the ANC in Lusaka, one of the encounters acknowledged to have paved the way to South Africa’s democratic transition.

He helped found and chaired the Campaign for Open Media between 1985 and 1994, which fought attempts to close down the alternative press during the State of Emergency. He founded and led the Media Business Training Foundation to boost the training of black journalists; was Vice President of PEN South Africa; a founding member of the South African National Editors’ Forum; and a key contributor to the Freedom of Expression Institute (FXI), which he led for several years. In retirement, he edited the South Africa Report.

Ordained a ‘World Press Freedom Hero’ by the International Press Institute in 2011 – along with US journalist Daniel Pearl who was murdered in Pakistan – Louw has been showered with awards. He never went to university but what he learned in the newsroom’s school of hard knocks earned him multiple honorary doctorates.

To many, this is what success looks like, but Louw himself thought differently, as I learned in a personal encounter with him recently. He was held in highest esteem by George Palmer, who as editor of the Financial Mail in the 1970s, turned that magazine against apartheid too. After Palmer’s death last year, a trust was established in his name to sponsor and mentor young financial journalists. Louw, at 92 and keen as ever, joined the board supporting the memory and will of his fondly remembered fellow fact-finder – and I had the honour of meeting him in this connection, first during a selection interview and then a second time at my inauguration as the first fellow of the Palmer Trust.

On these occasions, Louw expressed the greatest admiration for journalists in the mould of the ‘unknown soldier’. The sign of a great story, he said, was that it, rather than the reporter, was discussed at dinner tables around the country (and in desperate whispers along the corridors of power).

The only ‘badge of honour’ Louw recommended to me was ‘slander’. ‘When sinister peddlers of disinformation learn to fear you for the facts you report,’ he said, ‘they will begin to slander you, drag your name through the mud. Yes. When that happens, you know you are doing your job.’

On the theory that power should be flattered ‘to win the ear’ and ‘manipulate’, Louw spoke gruffly about ‘wobbling’. ‘Where has it worked? A well-informed society works. You cannot beat that.’

A mighty baobab has fallen! Hamba kahle Oom Raymond Louw #RayLouw You had fire in your belly and fire in your soul! We owe you a huge debt for defending media freedom for 72 years.

In a mesmerising speech at the Johannesburg offices of the Institute of Race Relations some months ago, Louw exhorted those present to focus on the task at hand: informing society. The task ahead was mighty, the resources to hand scant. Mindful of the various assaults on press freedom in today’s drifting South Africa, Louw also spoke to the global assault on accuracy that erupted from tectonic shifts in the technology of communication. Journalism was not getting any easier, which was exactly why it mattered.

The human mind, he maintained, would outmatch machine algorithms, demagoguery, fear and complacency so long as we applied our faculties, being determined, deliberate, disciplined to always, always, he said, ‘seek truth from facts’.

Louw died a day after the death of his wife, Jean. He is survived by his children Derek Louw and Fiona Ramsey, his grandchildren, Nicky and Peter, and great grandchildren, Savannah, Sasha and Larichia.

* A private service will be held next week for Raymond and Jean Ramsey Louw. A public memorial is being arranged for a later date by the Freedom of Expression Institute and others.