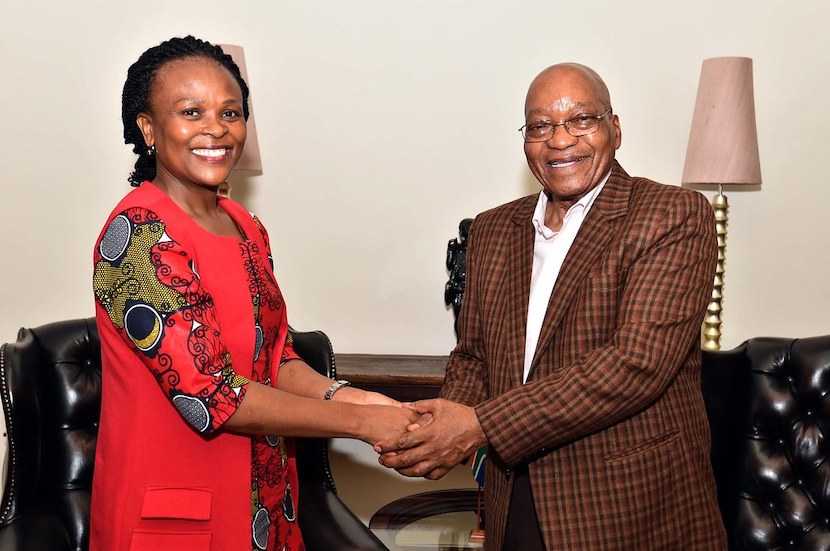 The very antithesis of her predecessor, SA’s Public Protector has spent all her ammunition on the ANC’s reformists and is now a loose cannon rolling around dangerously on the ship of state. Called dishonest by several judges whose rulings have painted her as bordering on incompetent, she should now resign or face impeachment, says Paul Hoffman, SC, the Founder of Accountability Now. Busisiwe Mkhwebane’s future involves one of four fates. Resignation, impeachment, striking off the roll of advocates or facing criminal liability for perjury. Only two of these are mutually exclusive. Hoffman traces the considerable legal musculature of the Office of the Public Protector, which the current incumbent has repeatedly wielded beyond its power, causing considerable reputational damage and happening to coincide very closely with the Zuptoid push-back agenda. How a fractured ANC handles a defiant Mkhwebane whose ignorant or omnipotent responses are frighteningly similar to former President Jacob Zuma’s, will starkly reveal where the power lies as the Zuptoids desperately try to align their sails to fast-ebbing political winds. Hoffman reckons the sooner the ANC pitches this loose cannon off the deck the sturdier it will become. As is so often the case with State Capture, you have to ask whether the party centre can hold. – Chris Bateman

The powers of the Public Protector

Now that the high jinks of Busisiwe Mkhwebane, our current Public Protector, have been characterised as both dishonest and indicative of her incompetence by our highest court and by our long-suffering and chronically persecuted Minister of Public Enterprises, Pravin Gordhan, it is an opportune time to take stock of what should be and what actually is happening on her watch.

The people needed help, back in 1994, to take on board the change between an authoritarian regime which forced its will on the masses and the new participative democracy under the rule of law. The founders of the Constitution created six new institutions to strengthen constitutional democracy in SA. They are collectively called “State Institutions supporting constitutional democracy” and they are all guaranteed their independence. In turn they must be “impartial and must exercise their powers and perform their functions without fear, favour or prejudice” on the basis that they are “subject only to the Constitution and the law”. The state must assist and protect these institutions to ensure their “independence, impartiality, dignity and effectiveness”. Support for, and popularisation of, the notions of constitutional democracy, especially its benefits for ordinary folk, are the stock in trade of the Chapter Nine Institutions.

The Public Protector is one of those institutions which has a threefold constitutional remit: firstly to investigate any conduct of state affairs or in the public administration that is alleged or suspected to be improper or to result in any impropriety or injustice; secondly to report on that conduct and thirdly to “take appropriate remedial action”.

The power to take appropriate remedial action came under the scrutiny of the Constitutional Court in the Nkandla matter in which unauthorised and illegal expenditure of public money at the home of then president Jacob Zuma on non-security upgrades was challenged and came under investigation as a breach of the code of conduct which binds the executive branch of government.

It was suggested on behalf of Zuma that the power to take appropriate remedial action was not binding on him and that the findings made against him, in essence to pay back the money spent of non-security upgrades at Nkandla, were in the nature of a recommendation by the Public Protector.

Busisiwe Mkhwebane says she will "study the Concourt judgement and respond comprehensively"
Ahem, Concourt = End of the road!

By the time the matter reached the Constitutional Court on appeal, with the DA, EFF, Corruption Watch as amicus curiae and the Public Protector herself lined up against Zuma, he blinked and threw in the towel, conceding the binding effect of the remedial action so appropriately taken by the Public Protector. Although there was no contest on the topic, the Court resoundingly and unanimously chose to deliver a reasoned judgment confirming in essence that the words in the Constitution mean exactly what they say. The Public Protector has the power to take appropriate remedial action.

The effect of this power is wide-ranging even though the remit of the Public Protector is limited to affairs of state (including the ethics of the executive) and the conduct of the public administration. She may not investigate court decisions, but any other alleged impropriety or prejudice in the conduct of state affairs or in the public administration is fair game for her teams of investigators around the country. Her remedial action must always be appropriate – ordering a change in the Constitution or asking national law-makers to change the regulation of horse-racing, a provincial competence, would clearly not be appropriate.

It has been argued that it is wrong to give the Public Protector binding powers and that her remedial action should be regarded as no more than a recommendation, leaving the implicated party the choice of taking it or leaving it. This suggestion in effect robs the Public Protector of the bite that she is given in our supreme law, the Constitution. An amendment of the Constitution, so trenchantly interpreted in the Nkandla judgment, is a hazardous and ill-advised path to tread.

It is going to be a long week for one Busi Mkhwebane. The thing about power is that you have to be bright and intelligent enough to know how to exercise it.

A practical problem that has arisen, in connection with the reviewing of remedial action required by the Public Protector, is that there are long delays in court processes and possible appeals in relation to contested reports of the Public Protector. These delays do give rise to valid concerns, but they are best addressed by utilising case management techniques now available to the judiciary. These techniques enable important matters to be accorded accelerated hearings in open court, be it in the judicial review or in any possible appeals. The sting of the delay factor can be addressed and alleviated using strict timetables to shorten the delays of the necessary process. It is most welcome that the President has announced that he will seek an urgent review of the findings made against him on 19 July, 2019.

The courts have not been given any direct powers in relation to removing an errant person in office from the office of Public Protector. The Constitution, ever mindful of the protection of the independence of Chapter Nine functionaries, requires proof of misconduct, incapacity or incompetence to the satisfaction of a committee of the National Assembly and the adoption, by a two thirds majority, of a resolution of the full Assembly. The President must, upon the adoption of the resolution, remove the person concerned from office.

The DA has long contended that our current Public Protector is incompetent. It has an array of court judgments that support its stance. Accountability Now has long contended that the Public Protector is dishonest, and it has a paper trail that suggests that its complaint is well founded. Now that there is a Constitutional Court finding that the Public Protector is both dishonest and incompetent, it is up to the ANC caucus in the National Assembly to decide whether it can, in all good conscience and with due regard to its own accountability, continue to shelter the Public Protector from the consequences of the questionable activities in which she engages. As the Public Protector has finally been found to be dishonest (serious misconduct in any advocate which should lead to disbarment when perjury is involved) and lacking in competence, she is incapable of fulfilling the constitutional mandate of her office in an independent, impartial and effective way and it is the duty of the National Assembly to resolve that she be removed from office. Dereliction of duty by politicians is not an option in the post-Nkandla judgment era.

The blatantly contemptuous continued state of denial by the Public Protector in her reaction to the Constitutional Court judgment and her assertion that its majority has created a bad precedent is simply further evidence of her lack of proper insight as she is bound by the decision of the majority, a decision which, on her track record will bankrupt her in a short period as other litigants already seek punitive costs orders against her. The Public Protector is a loose cannon rolling around on the upper deck of the ship of state needs to be thrown overboard now, before it does any more damage. Properly advised the Public Protector will tender her resignation forthwith. It is also incumbent upon the Legal Practice Council to investigate whether or not she is a fit and proper person to be an advocate. Our law requires that all advocates act with probity and integrity at all times.