The Government is forging ahead to change the Constitution to allow for land expropriation without compensation. Sixty of the 73 recommendations of the Presidential Advisory Panel on Land Reform and Agriculture was approved by Cabinet last week. In a keynote address on the Day of Reconciliation, President Cyril Ramaphosa said it was a government priority to accelerate the process of land reform to benefit communities and that the government will continue to free up state-owned land. He called on private landowners, commercial farmers and the private sector to take proactive steps to accelerate land reform. One of the communities that could finally get their land back or receive compensation are the 949 claimants of District Six after Minister Thoko Didiza submitted the plan for the redevelopment of District Six to the Land Claims Court. Didiza was ordered to submit a conception layout detailing the redevelopment of the area where the community was forcibly removed in the apartheid era after the District Six Working Committee took her department to court. Mark Oppenheimer,   an independent member of the Johannesburg Bar, argues against amending the Bill of Rights to allow for land restitution and says “people have been duped into believing that expropriation without compensation only refers to rural farming land”. He says the changes could mean people are given houses in cities and suburbs. – Linda van Tilburg

At a time when South Africa’s economy is flatlining and Eskom is failing, Government has proposed an amendment to the Bill of Rights, which will allow it to confiscate people’s homes without compensation.

This article will address four issues. First, the State’s current powers in terms of S25 of the Constitution to expropriate land without compensation. Second, how this will change if the amendment Bill is passed. Third, the international law obligation on the State to pay appropriate compensation in cases of expropriation. Fourth, reasons not to amend the Constitution.

S25 of the Constitution

25. (1) No one may be deprived of property except in terms of law of general application, and no law may permit arbitrary deprivation of property.

(a) for a public purpose or in the public interest; and

(b) subject to compensation, the amount of which and the time and manner of payment of which have either been agreed to by those affected or decided or approved by a court.

(3) The amount of the compensation and the time and manner of payment must be just and equitable, reflecting an equitable balance between the public interest and the interests of those affected, having regard to all relevant circumstances, including –

(a) the current use of the property;

(b) the history of the acquisition and use of the property;

(c) the market value of the property;

(d) the extent of direct state investment and subsidy in the acquisition and beneficial capital improvement of the property; and

(e) the purpose of the expropriation.

In the case of Ex parte Former Highland Residents: In re Ash and Others v Department of Land Affairs(1) the court held that:

The equitable balance required by the Constitution for the determination of just and equitable compensation will in most cases best be achieved by first determining the market value of the property and thereafter by subtracting from or adding to the amount of the market value, as other relevant circumstances may require.

In the case of Khumalo and others v Potgieter and others(2) the court set out a two-stage process to determine the amount of compensation that was fair and equitable in terms of S25 of the Constitution.

In the first stage, it was determined what the market value of the property was by examining comparable sales. In this process the court endorsed the “Pointe Gourde” principle. According to this principle in the assessment of the market value of land acquired in an expropriation, no regard shall be had to any increase or decrease in value of the land, which is attributable to the scheme underlying the acquisition.

In the second stage, the other four factors set out in S25(3) of the Constitution are utilised to adjust the market value price up or down.

The learned authors of The Bill of Rights Handbook state that:

Section 25 requires compensation for an expropriation to be fair and equitable in amount, timing and manner of payment. Compensation not meeting this requirement will be unfair and inequitable and can hardly be considered reasonable and justifiable.(3)

There will be situations where no compensation is due after expropriation. For example, if the land in question has no market value, or where the amount paid by the state to subsidise the initial acquisition of the land was equal to or greater than the market value. However, as a general rule the Constitution does require the payment of some compensation that is just and equitable and it will only be in a narrow set of situations that no compensation will be due.

Amendment of section 25 of Constitution

(a) by the substitution in subsection (2) for paragraph (b) of the following paragraph:

‘‘(b) subject to compensation, the amount of which and the time and manner of payment of which have either been agreed to by those affected or decided or approved by a court: Provided that in accordance with subsection (3A) a court may, where land and any improvements thereon are expropriated for the purposes of land reform, determine that the amount of compensation is nil.’’;

(b)  by the substitution in subsection (3) for the words preceding paragraph (a) of the following words:

‘‘(3) The amount of the compensation as contemplated in subsection (2)(b), and the time and manner of any payment, must be just and equitable, reflecting an equitable balance between the public interest and the interests of those affected, having regard to all relevant circumstances, including—’’; and

(c)  by the insertion after subsection (3) of the following subsection:

‘‘(3A) National legislation must, subject to subsections (2) and (3), set out specific circumstances where a court may determine that the amount of compensation is nil.’’.

The effect of the amendment is to bypass the relevant circumstances that currently determine compensation (set out in S25(3) of the Constitution) and replace them with circumstances that have yet to be determined by national legislation. This grants parliament a blank cheque to pass a law (at the lower voting threshold of 50% plus 1), setting out when nil compensation is payable.

Many people have been duped into believing that expropriation without compensation only refers to rural farming land, the Bill makes it clear that all land and the homes on that land are open to confiscation. It will be easy for the State to argue that land reform (both restitution and redistribution) will be furthered if more people are given houses in cities and suburbs.

In terms of international law, a State has the power to expropriate, but this power is accompanied by a duty to pay appropriate compensation. There may be circumstances where it is appropriate to pay no compensation, but each case will have to be determined on its own merits.

The Bill opens the door for the exclusion of South Africa from the African Growth and Opportunity Act (AGOA). AGOA is a United States Trade Act, that significantly enhances market access to the US for qualifying Sub-Saharan African countries. South Africa is a beneficiary of AGOA and in 2018 we exported over R 100 Billion worth of goods to the United States.(4)

In terms of S104 of AGOA South Africa would remain eligible to benefit from the Act provided that is has “established, or is making continual progress to establishing, a market-based economy that protects private property rights, incorporates an open rules-based trading system, and minimises government interference in the economy through measures such as price controls, subsidies, and government ownership of economic assets.”(5)

Reasons not to amend the Constitution

South Africa has a dark history of land theft. Justice requires that the wrongs of the past are addressed by awarding compensation to the victims of land dispossession. Between 1995 and 2014 over 1.8 million individuals have received compensation either in the form of land or money. This was achieved without the need to expropriate land without compensation and the strong inference is that the reminder of land claims can also be resolved without interfering with the Constitution. 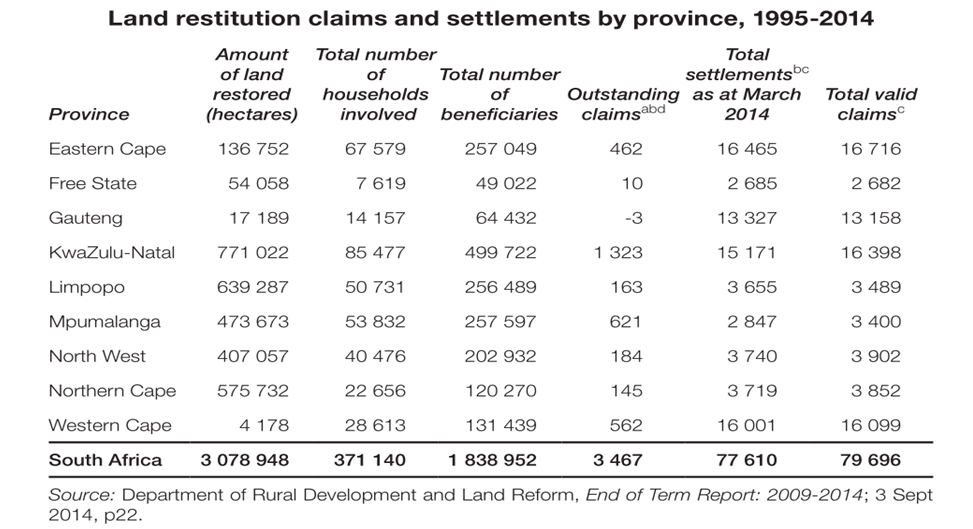 When land claim cases are resolved, claimants are given the choice of receiving land or financial compensation. In 92% of cases, people choose money over land.(6) This shouldn’t come as much of a surprise, because money translates into freedom. Beneficiaries can use that money to start businesses, pay off debts or invest in the market.

Lack of demand for land distribution

The Institute of Race Relations has polled South Africans to determine what they perceive to be the country’s most serious unresolved problems. Almost 40% identify unemployment, 33% raise a lack of service delivery, while less than 1% are concerned about land distribution.(7)

Farming is a technical job

Government spent over R1.4 billion buying farms in the Eastern Cape to redistribute to aspirant farmers. Of the 265 farms purchased, only 26 remain viable.(8) In 90% of those cases, once thriving farms that produced food and employment are now in ruin. Being a farmer is not easy. It’s a technical job that requires an enormous amount of time, expertise, and money as well as a lot of support and training if you have no background in farming. Providing someone with the land to farm is no guarantee that the farm will be successful.

Damage to the economy

Life involves trade-offs, you can’t remove property rights and have a flourishing economy. Foreign investors won’t risk having their land confiscated in South Africa when they can pick any number of other nations that will protect their investments.

When Zimbabwe implemented a policy of expropriation without compensation it led to the world’s worst case of hyperinflation. It wasn’t just the original landowners that were hurt, the average man on the street was left destitute after the economy was annihilated.

A floundering economy would have a negative impact on the amount of tax revenue that can be collected to assist the poor. If the State wants to acquire more land for the benefit of the poor and dispossessed it can do so by utilizing funds from the annual budget. In the last financial year, R5.7 billion was been budgeted for land reform and restitution, which is only 0.3% of the total budgeted expenditure of R1.67 trillion.(9)

We have an internationally lauded Constitution premised on freedom, dignity, and equality. We have never altered our Bill of Rights and the evidence shows that there is no reason to do so now.

You can express your opposition to the Amendment Bill by sending a submission to [email protected]. All submissions must be made before 31 January 2020.