Eskom is renowned for having a “revolving door” of top executives and, after nine months, André de Ruyter is nearing the average term for CEOs over the last decade. Previous CEO Phakamani Hadebe resigned due to health reasons and the highly regarded Brian Dames burnt out at 48 after three years in the job. When De Ruyter was appointed as the new Eskom CEO, he was dubbed the “surprise choice”. Some considered him brave for taking on the most difficult job in SA while others opposed his appointment. According to the Sunday Times, 27 black executives were offered the top job but declined. They seemed to regard such an appointment as the kiss of death. In a separate article, Andrew Kenny concluded that what Eskom needed was someone who can detach himself from politics and stick to Eskom’s purpose, which is to supply sufficient affordable electricity for South Africa and cover its costs. De Ruyter has seemingly surprised his critics and “has stayed the path despite the frustrations and gridlock that many observers thought would make him leave Eskom by this time.” – Lindiwe Molekoa

(Bloomberg) — Andre de Ruyter knew well the adversity he faced at South Africa’s power monopoly — a state-owned wreck hollowed out by corruption that struggles to keep the lights on, pay its bills and play ball with a unionized workforce.

“I don’t think I was under any illusion that this wasn’t going to be a very challenging job,” De Ruyter said in an interview nine months into his tenure as chief executive officer of Eskom Holdings SOC Ltd.

So when De Ruyter got to work as the 13th Eskom CEO in the past decade, he went after one foolproof success. He ordered up a new paint job for the main board room at Megawatt Park, the utility’s brutalist-style headquarters in suburban Johannesburg. “It was dirty and it looked shoddy,” he says. “I’m meticulous. I want to do things right.”

The 52-year-old private-sector veteran is confident his corporate approach, like a merit-based system for managers and an intolerance for theft, are making headway. The aim is to turn the flailing coal-burning giant into a green-power business with a manageable debt load that sustains Africa’s most-advanced economy.

“De Ruyter has surprised critics due to his tenacity,” said Darias Jonker, a director at the Eurasia Group in London. “He has stayed the path despite the frustrations and gridlock that many observers thought would make him leave Eskom by this time.”

Even before Covid deepened South Africa’s recession, De Ruyter made waves taking on key constituencies, including his board of directors. He sued the regulator to raise power prices, cut off towns with long-overdue bills and moved to cancel bloated supply contracts. He’s even begun to hold managers accountable in the 44,000-employee company. 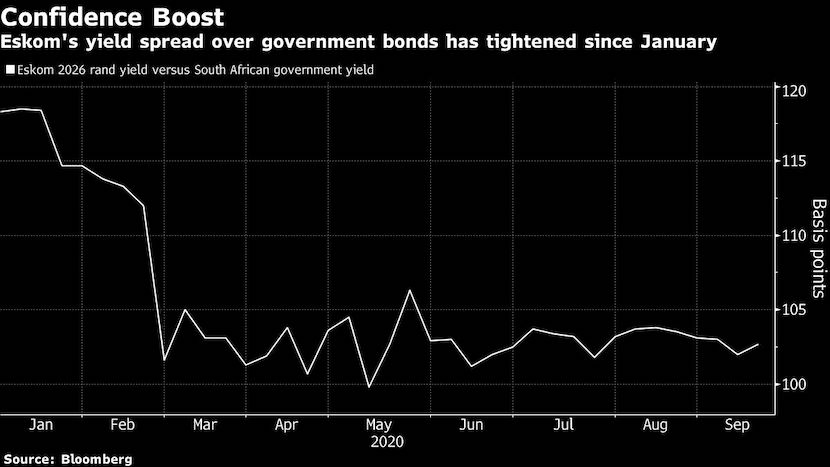 Operations are a mess too. Blackouts are rampant, with Eskom limiting supply to keep a decaying grid from collapsing. Loadshedding, as it’s called locally, cost South Africa as much as $7 billion in 2019 and the utility this year has already cut the most power on record. 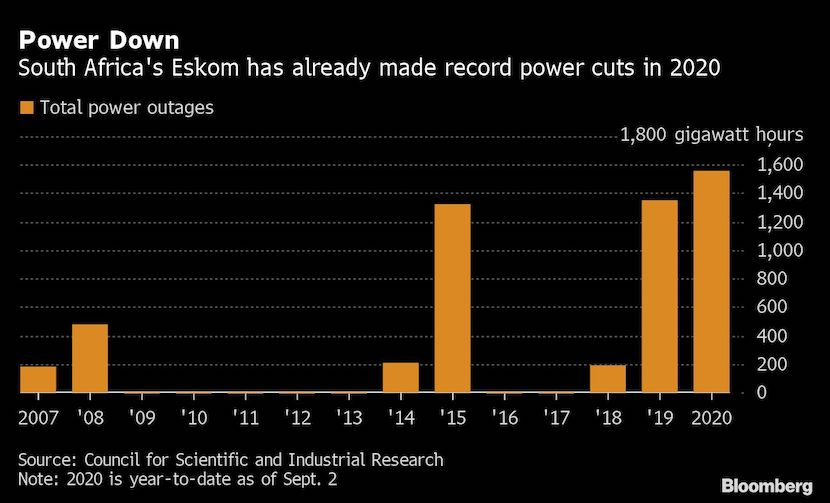 President Cyril Ramaphosa’s solution is to split Eskom into generation, transmission and distribution businesses, without cutting jobs. De Ruyter’s task is to carry that out.

“We can’t carry on doing things like we’ve always done,” he said. “You’d have to be oblivious to what’s going on in the economy and the negative impact that loadshedding has on the economy.”

The traditional CEO track at Eskom is to rise through the ranks of the utility or shift from a government position. De Ruyter was an outlier for the job, having made his name as a manager at Sasol Ltd., the chemical and fuel producer, heading businesses in China and Germany. Passed over as Sasol CEO, De Ruyter moved on, accepting the top job at packaging company Nampak Ltd.

After five years there, he was tapped by the government in a surprise appointment that angered labor unions calling for a Black CEO. Leading candidates declined to take on the challenge, withdrawing from consideration.

Ramaphosa has invited private power producers to meet demand and reverse an economic downturn with unemployment at 30% and rising.

Eskom became synonymous with graft and corruption during the nine-year presidency of Jacob Zuma that preceded Ramaphosa’s. The company was at the heart of a scam by the locally notorious Guptas, an Indian family that has now fled to Dubai to avoid prosecution. They parlayed political ties into a range of Eskom contracts, from coal supply to consulting. They have denied wrongdoing.

Among others tagged were Deloitte LLP, which admitted to irregularities in the procurement process, and McKinsey & Co., which agreed to return money to the utility after a dispute over its contract.

That helps explain why De Ruyter is getting into the weeds. He responds to customer complaints personally by email. “People are frustrated,” he said.

Touring the warehouse of one coal-fired station, he noticed three stories of shelving crowded with actuators, a component for its plants, and asked how many are actually used in a year. “It turns out that we’ve been buying these things without regard to the real need,” he said. 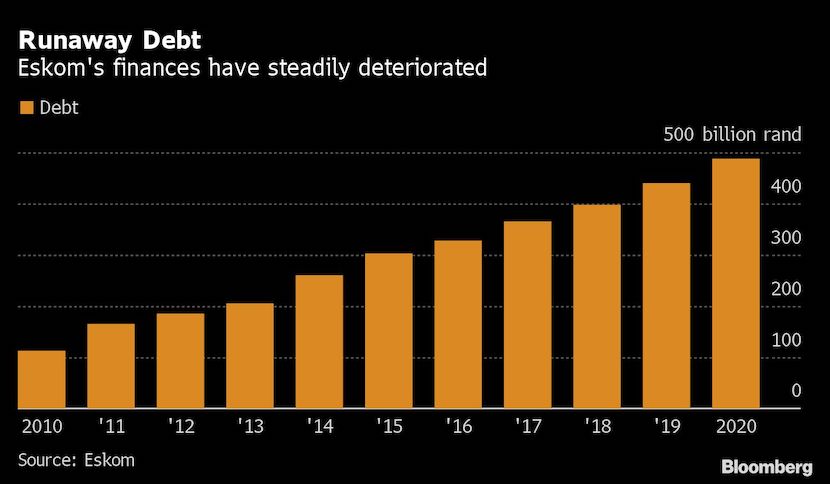 Yet, with a fleet of power stations prone to breakdowns, Eskom lacks what’s needed for repairs and maintenance. There’s up to $100 million of parts at each of over a dozen sites, “but when you look for the critical spares, we don’t have them,” De Ruyter said.

“Then you start turning over all the rocks” he said, describing how he also learned that the average age of transformers is at least a decade older than what would already have been replaced in the private sector.

Under another, he found the amount of purchases made without a contract rose to upwards of 90%. “If you want to steal, an absence of controls is favorable, that helps you. And it’s interesting to see the cataloguing goes up to a certain number and then it just stops.” Eskom now has an initiative to catalogue all purchases.

“Given that his personal vision for Eskom must be in direct conflict with a very complex group of stakeholders, he seems to have made decent progress,” said Bronwyn Blood, a portfolio manager at Granate Asset Management Ltd. in Cape Town. “The fact that he is still in the job, which is no doubt the toughest job in South Africa, and soldiering on bravely through the challenges that Eskom faces, is hugely positive from an investor’s point of view.”

Equipment and software don’t fight back — unlike the people De Ruyter needs to get with his program.

“Eskom employees are completely disconnected to the current leadership,” said Irvin Jim, general secretary of the National Union of Metalworkers of South Africa, the second-biggest union at the utility. “You see that in the Eskom performance.”

The risk of failing to get unions’ cooperation emerged in 2018 during wage negotiations. Canceling expected bonuses was called an “act of war” by the utility’s biggest labor group, the National Union of Mineworkers. Protesters blocked access to the stations, conveyor belts carrying coal were cut, power went out, and the rand weakened. Eskom capitulated to the demands.

De Ruyter says he has a good relationship and prefers to collaborate with the unions, but is setting an unfamiliar tone from the top.

Managers from over a dozen power stations were summoned last month to an auditorium at Eskom’s headquarters to be confronted by De Ruyter with photos showing “very poor maintenance practices.”

“I said, ‘this is it, please understand that some of you will no longer be here if this continues.”’ After severe power cuts followed, De Ruyter hand-delivered suspension letters to some of the managers.

The stakeholders who ultimately control Eskom’s fate are giving him space to put turnaround plans in motion.

Eskom’s government manager, the Department of Public Enterprises, supports De Ruyter’s recent moves. “The CEO has revised the team in generation to try and strengthen it so he can better cope with the challenges,” DPE Director-General Kgathatso Tlhakudi said in an interview on a day of power cuts last month.

But the government won’t be providing a blank check indefinitely. Eskom must show improvement in various areas including its cost base, revenue and collecting municipal debt, he said. “What we cannot be expecting is that the quantum of support that they’ve been receiving up until now should continue.”

Ramaphosa, who has pledged urgent action to add capacity from private producers, holds the key, De Ruyter says, offering a tale about the building of a Russian railroad, when officials were bickering about the route. “Legend has it that the Tsar then walked in, flogged down a ruler on the map, said ‘there is the route’ and that was it.”

De Ruyter says it’s not enough to keep Eskom operating. Besides cutting the debt load and moving away from coal, he has his eye on creating a clean energy industry in South Africa.

In Mpumalanga province, the heart of coal country, the black rocks travel on conveyers that stretch for miles to power stations. Some Eskom plants are within a short enough distance to the only natural gas pipeline from Mozambique that they could be repurposed to use the fuel. De Ruyter has had regular discussions with the World Bank as well as French and German development banks about how such a transition could allow better financing terms.

The proposal calls for a major leap of faith by labor, which must sign off. “We need to as a country understand the very legitimate fears of people who have jobs that are afraid of losing those jobs,” he said.

After nine months, De Ruyter is nearing the average term for Eskom CEOs over the last decade. “I find it personally very rewarding to see things improve and maybe that improvement is not visible outside, but gradually you can sense it.” he said. “It’s a big elephant. One bite at a time.”

–With assistance from Robert Brand and Antony Sguazzin.