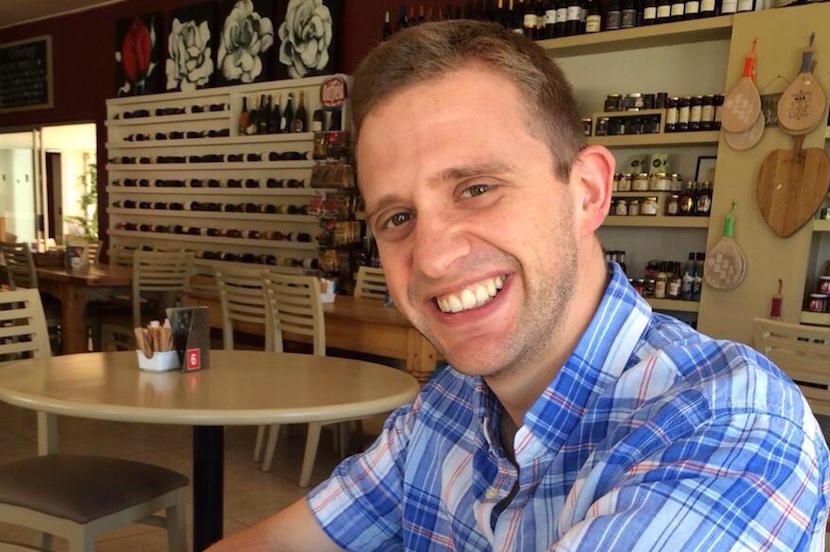 Founder of Paratus, Gideon Joubert tells the harrowing story of escaping a distressing hijacking, jumping out of a moving car to escape his attackers. Joubert says he realised that he couldn’t rely on the state for his personal safety. In this interview with BizNews founder Alec Hogg, Joubert sets out why he is in support of gun ownership and discusses the problem with current firearm legislation in South Africa. The airline pilot believes that our firearm legislation – which is among the strictest in the world – has made the process of procuring a firearm licence expensive, laborious and overly complicated. ‘I believe that we should treat firearms the way we treat vehicles, [from] a legislative and registration point of view.’  Joubert believes there should be one licence for the firearm owner, who can then have various firearms registered under his, or her, name. ‘You as an individual become the licence holder. All of your firearms are then placed on an electronic register under your name. This, says Joubert, will create an ‘efficient, fair and practical system of firearm licencing.’ – Jarryd Neves 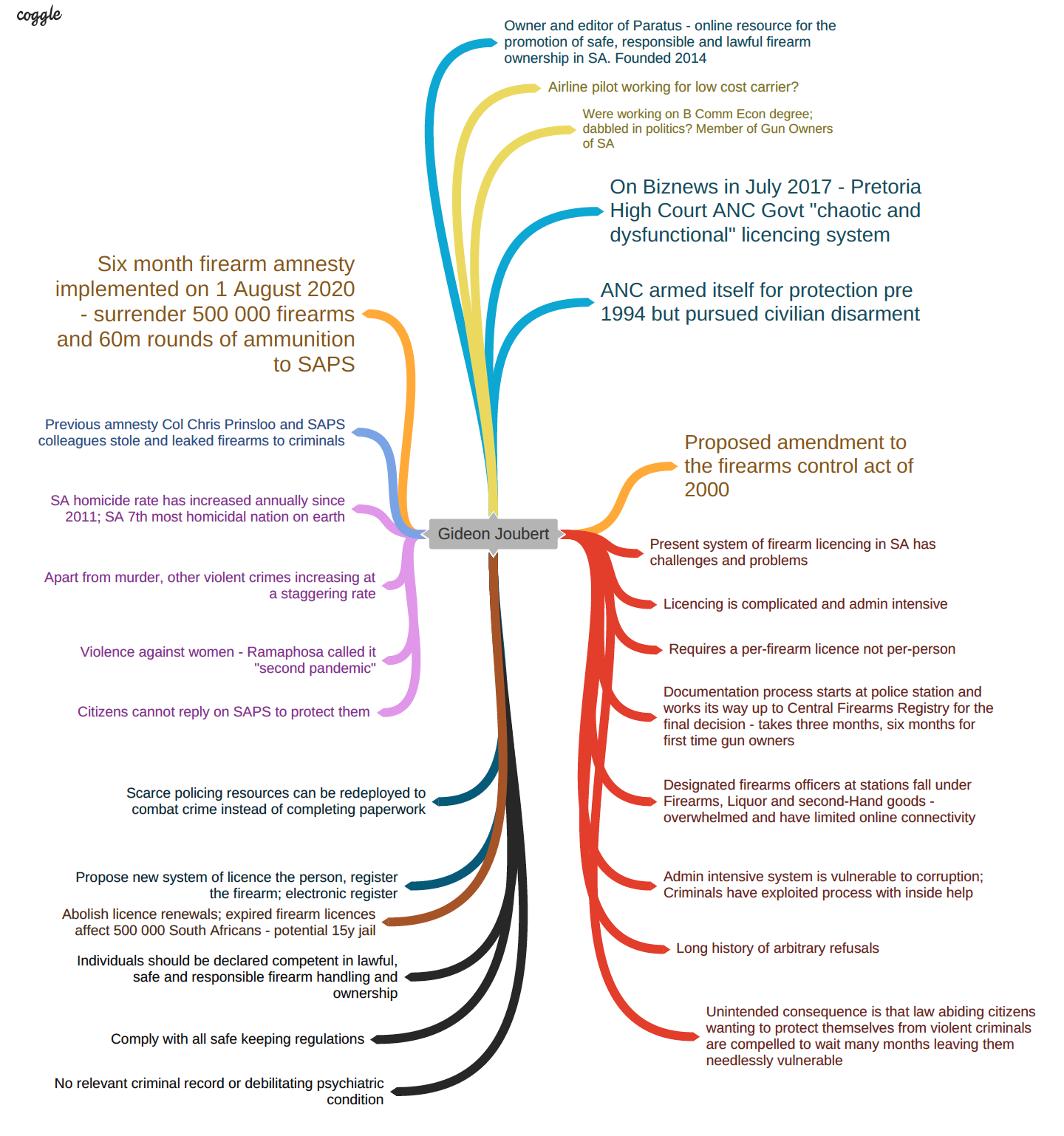 Gideon Joubert on his interest in guns and gun licensing:

I reached a point in my life where I became acutely aware that my personal safety is a responsibility that I should not be outsourcing to the state and its organs. They cannot protect me against violent, criminal predation. It’s something that I started taking incredibly seriously. Firearms became a natural progression, as a very effective tool, pertaining to private defence.

On his person experiences with crime:

I was the victim of two violent criminal incidents, prior to me becoming a licensed firearm owner. I actually became a lawful gun owner quite late in my life, I was about 26 when I went that far. But prior to that, a particularly traumatic [experience] was that I was hijacked and kidnapped on Easter weekend, 2007. It was quite a harrowing story. I was armed, fortunately, with pepper spray. I was kidnapped by three men. Fortunately I could pepper spray them and bail out of my car, as it was careening down Watermeyer Street in Pretoria.

The Latin meaning of it stuck with me, which is essentially ‘be prepared.’  Paratus is a web-based resource. It started as a blog, but it became more of a resource pertaining to, not just lawful and responsible firearm ownership, but it has also become a good [place for] self-defence/private defence information. Most recently, thanks to lockdown, it’s become sort of a civil liberties/civil rights type thing as well.

I like owning guns and using them at shooting ranges. I do enjoy them for what they are, but I also see them as an avatar for individual liberty and self-reliance. They’ve become more than just a tool. They’ve also become a bit of a symbol, to a degree.

On guns in relation to crime

Every single nation that has imposed extreme and prohibitive restrictions on firearm ownership, have all got extremely high murder rates. You can look at the top 10 list in the World Bank data. Which is, us (South Africa), Jamaica, Honduras, El Salvador, Venezuela – all these countries. Obviously, the private firearm ownership isn’t the only correlation. It cuts much deeper than that. You’re also looking at dysfunctional economies. You’re looking at authoritarian regimes. You’re looking at low levels of social trust, low levels of economic development and so on.

On firearms as a defensive tool

I want to caution people to seeing firearms as some sort of magic talisman that – just by its existence – wards off evil. Ultimately, any defensive tool is only as effective as the level of skill and proficiency of the user.

South Africa has among the strictest firearm legislation in the world. The Firearms Control Act of 2000 has ensured the process for obtaining a firearm licence is expensive, complicated, and administratively intensive.

This results in the denial of lawful firearm ownership to most South Africans on the basis of cost. The average township citizen is expected to spend in excess of several months’ pay to comply with the process. They are additionally required to complete an extensive and intensely complicated paperwork procedure in English, which is the home language of only 9,6% of South Africans.

In spite of our strict gun laws, criminals obtain firearms with relative ease. There are an estimated 500 000 to 3,7-million illicitly-owned firearms in circulation. Many of these are formerly state-owned weapons that were either stolen or found their way into criminal hands via corruption.

The worst example of the latter is likely the Colonel Chris Prinsloo scandal. Prinsloo and his corrupt colleagues stole thousands of guns, most of which were surrendered to the SAPS by their previously lawful owners during the 2010 firearm amnesty, from police storage and then sold them to criminals and Cape Flats gangsters.

We are presently in the midst of another firearm amnesty. Its assumed purpose is to address the 500 000 South Africans who have expired firearm licences.

This is in itself a crisis that holds potentially disastrous consequences for public safety and national security. Yet there have been no indications from the SAPS how they intend to manage the processing and safe-keeping of half-a-million firearms and 60-million rounds of ammunition. Nor have lawmakers indicated what steps they will take to prevent a similar crisis from occurring again.

Much of this is due to our present firearm licensing regime. The system is inefficient and severely lacks transparency. It is also archaic and relies on excessive amounts of physical paperwork to function.

To illustrate, every individual firearm must be separately licensed, as opposed to licensing the individual owner. Thus the duplication of paperwork is nothing short of astronomical, especially when considering that firearm licences must be renewed every five to ten years.

The administrative burden this places on already overstretched police resources is extensive. Unsurprisingly the system’s lack of transparency, its archaic nature, and overreliance on physical paperwork makes it highly susceptible to criminal exploitation and corrupt activities.

Further exacerbating things, is the fact that the law is applied arbitrarily and often in contravention of administrative justice.

The outcome of this is that law-abiding citizens who are fit and proper to legally own firearms are denied licences for capricious reasons. This means people are unjustifiably denied self-defence licences while living in the seventh most homicidal nation on Earth. This while our National Commissioner admits to Parliament that the SAPS are “overstretched” and that it is “impossible” for the police to fulfil their constitutional mandate.

Yet all is not lost. And much can be solved within the existing legislative framework via a simple amendment: license the person, register the firearm.

This means that the individual becomes the licence-holder, and their firearms are then electronically registered to their name on a secure database. In effect we will treat firearm licencing the same way we treat drivers licences and vehicle registration.

Once an individual satisfies the legal requirements to be declared a fit and proper person, they must be issued a firearm licence.

Fit and proper infers they are declared competent pertaining to lawful, safe, and responsible firearm handling and ownership, that they comply with all safe-keeping requirements as stipulated by the FCA, and that they have no relevant criminal record or debilitating psychiatric condition which renders them unfit to possess a firearm.

All their appropriate personal information is recorded on their personal online “account” at the registry, which should be secured by use of biometrics. Their firearms are registered to their name on this database, and any firearms and ammunition they purchase are electronically recorded at dealer-level.

By changing our approach to firearm licencing we solve numerous problems.

Firstly, by making the process peremptory in nature, we remove the present problem of the SAPS applying it arbitrarily.

Secondly, by making the process online and electronic, and securing access by use of biometric identification, transparency and ease-of-audit are greatly enhanced. This significantly reduces opportunities for criminal exploitation.

Lastly, by enhancing efficiency, we reduce strain upon limited and scarce police resources. This allows the SAPS to redeploy resources to the task of enforcing compliance and law enforcement, as opposed to being bogged down in endless mountains of administration.

Therefore a transparent, efficient, fair and practical system of firearm licencing is in the best interest of society.

The result of which will be a safer and more secure South Africa, where the constitutional rights to life and security of person are upheld, and the rule of law is effectively promoted.

Do you think gun ownership is an avatar for civil liberty? Do you think we should carry weapons to ward off evil? Listen to this fascinating conversation – and then share your views on this interesting debate, below.