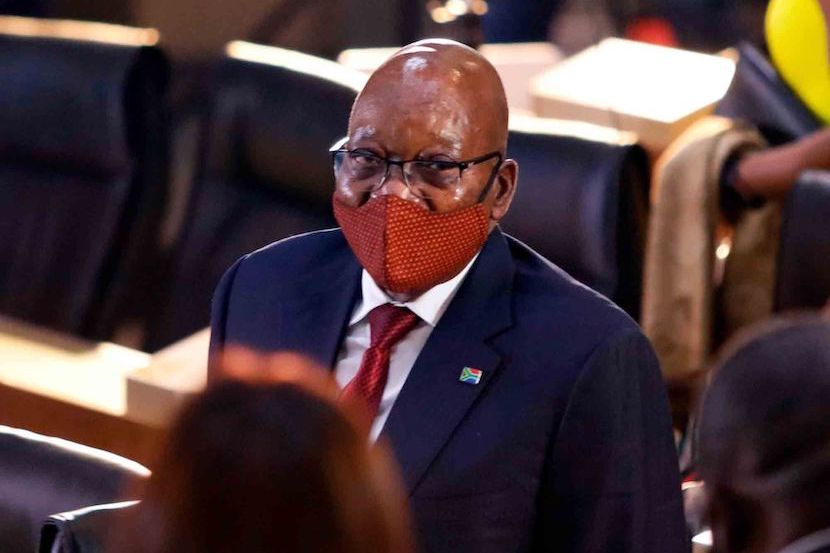 After his recusal application at the Zondo Commission was denied, Jacob Zuma and his lawyers stormed out and left the inquiry without permission. As my colleague Bernice Maune remarked in her piece: “it is worth noting that he has frustrated the justice system before”. Political activist Errol Horwitz is of the opinion that the antics displayed by Zuma’s legal team before Judge Raymond Zondo are a sign of a malignancy that has spread within the legal fraternity over several years. Horwitz has previously referred to Zuma as the “master of delay tactics”, in an article published on BizNews, and his actions at the State Capture Commission last week seem to be of a man who relies on attorneys and advocates to do his bidding and avoid his long-awaited day in court. – Lindiwe Molekoa

Thousands of South Africans witnessed the antics of Zuma’s legal team following the dismissal of his application for Deputy Chief Justice Raymond Zondo to recuse himself as Chairperson of the State Capture Commission. After announcing a short tea break Zuma and his legal team left the building like rats leaving Zuma’s sinking ship. They did so, not like Elvis, who left the building to resounding encores from his adoring fans, but rather surreptitiously, without being excused by the Chairperson. Whether Zuma will face contempt proceedings, or his legal teams will face disciplinary action for unprofessional conduct, time will tell. . .

The antics of Zuma’ legal team before Deputy Justice Zondo is symptomatic of a malignancy that has metastasised within the legal fraternity over several years. Case after case with little or no merit against Zuma, argued by his legal team has been thrown out by courts without the imposition of sanctions due to Zuma’s spurious or unfounded claims. It’s as if the Trump administration took a page out of a South Africa legal fraternity’s Practice Manual of Dodgy Tactics, when Trump’s attack dog, Rudy Giuliani launched a battery of cases to declare Biden’s presidential election unlawful. Many of those cases were withdrawn by counsel for lack of evidence, and in fear of the imposition of sanctions by US courts which are more readily inclined to order a variety of penalties against recalcitrant lawyers as a deterrent against frivolous litigation.

There is no argument that Zuma is street smart, but he lacks the ability to solely navigate the legal system, and in effect delay year after year his day in court. For this purpose he relies on attorneys and advocates to do his bidding. A prime example that comes to mind was the stunning 11th hour open court admission by Zuma’s counsel, Kemp J. Kemp, that the NPA’s decision to withdraw more than 700 corruption charges against Zuma was irrational. The concession came after eight years and a staggering R30m of wasted taxpayer’s money to pay the costs of advocates and attorneys representing Zuma.

Shakespeare must have had Kemp in mind when he wrote “let’s kill all the lawyers” in Henry VI, Part 2, Act IV, Scene 2.  Some have said Shakespeare meant it as a joke, but others have, and correctly so, argued it was an indictment against incompetent or ethically challenged lawyers. Nothing much has changed since Shakespeare’s time, except today’s litigants, like Zuma, are not bent on killing their lawyers. Instead incompetent or ethically challenged lawyers are Zuma’s ongoing flavour of the month, held in higher esteem than used car salesmen.

South Africa’s legal system consists of a division of the Bar. Advocates on the one hand, and attorneys on the other. Why this division persists to this day is irrational purposely designed to prevent the ordinary person in the street, the biggest loser, from fair access to the entire court system.

Members of the Bar pretentiously known as advocates regard themselves as superior to their counterparts who are relegated to performing the drudge/trench work of the practice of law. Stereotypically they are regarded as pompous, elitist, arrogant and aloof. They consider themselves the cream of the lawyer crop, basking in the sun of their ivory chambers, waiting with mouth-watering crocodilian anticipation for the next brief.

In today’s world there is no other monopolistic profession. Bar members look solely to attorneys for payment of their fees. Differently put: attorneys are simply collection agents for their fees, who, in turn, collect the fee from the client. At the risk of being accused of bias, dripping with sarcasm, they are relics of the past, not as old as Rudyard Kipling’s characterisation of the oldest profession in the world, but a very old colonial era.

In furtherance of their embedded elitism, advocates appearing before High or Appellate Courts don themselves in the trappings of an archaic pompous colonial era. Quoting from Bert Bester’s excellent article in Advocate “is it better to be a fake lawyer-aristocrat than a plebeian lawyer?

Tracing back the history such relics, it is clear they are the bastard union of an uncomfortable union between the fashions of a pre-16th century English elite and the funereal medieval European ecclesiastical dress”. It cannot be seriously argued that there is a perceived ongoing need for robes.

To put it bluntly, the donning of robes no longer proclaims the man or the woman. More significantly, if we are on the road to transformation and the disembowelling of colonialism, perhaps a T-shirt emblazoned with African motifs be worn by advocates and attorneys alike. It would certainly level the playing field between them, unless their proclivity for unintelligible verbal incontinence separates the wheat from the chaff, then all bets are off.

I suspect few in South Africa’s legal fraternity would argue against the donning of robes in court in the name of tradition and solemnity. That may be so, but the robe is firmly linked to a historically evil political system that voraciously fed on cruelty and duplicity instead of a people-first justice system. Surely it is time to dispense wearing the robe, and consigning it to the dress-up box for use on the eve of All Saints Day.

Now, to return to Zuma’ counsel who, at the 11th hour, conceded that the withdrawal of charges against Zuma was irrational, setting the stage for successor Zuma counsel to argue appeals, reviews, recusals, manifestly lacking merit. The penny has yet to drop and probably never will, because a due diligence investigation of the factual and legal issues are considered form rather than substance at best.

As far as the courts are concerned, they suffer in silence the filing of baseless, insupportable claims designed only to delay and obstruct the course of justice. As it is, there exists an epidemic of baseless claims emanating from ANC government cadres who clog the courts and undermine the administration of justice. Surely it is time for the courts to step up to the plate and impose punitive sanctions on counsel and litigants who abuse the system.

In conclusion, and on a separate note, the Medical Council of South Africa recently held that a dentist is immunised from disciplinary action in failing to inquire into patient past medications taken. According to the Council the onus is on the patient, even one who is an aged person suffering from geriatric characteristics. There is no other way of looking at it: we are all in a sinking ship because of a lack of basic intelligence!