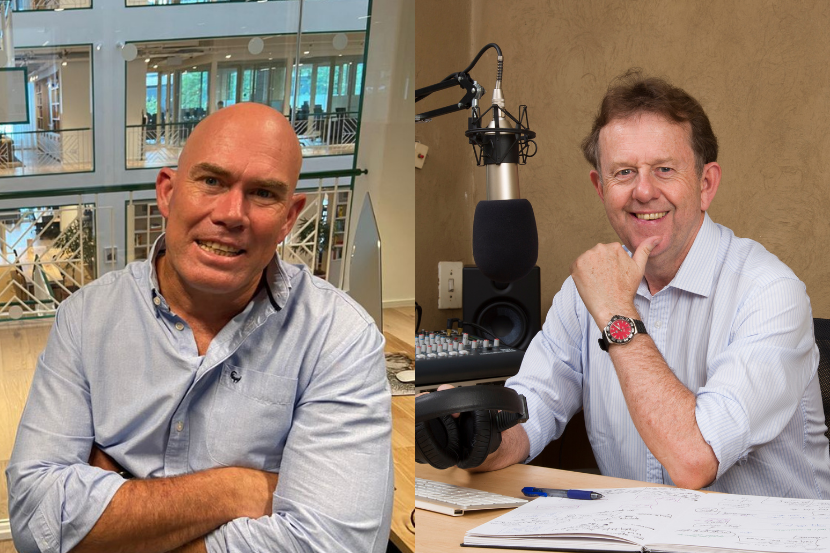 In a world overpopulated with fakes, the authenticity of GG Alcock is a beacon of hope. Raised in a mud hut by committed South African Liberals, Alcock’s story is inspirational, insightful and uplifting. For those who have read them, his excellent books Third World Child and Kasinomics expose a country few suburb-dwelling South Africans know exists. In this wide ranging discussion, Alcock shares how his roots in rural poverty created unique perspectives on issues that today baffle most of his fellow citizens. For instance, how the corruption-ridden ANC retains political power despite its well acknowledged failings; how massive but mostly unrecognised economic transformation has changed the landscape of former townships; and why he is optimistic at a time when pretty much every pundit sees the SA glass as half empty. Alcock is simply superb. – Alec Hogg

GG Alcock on his parents:

They were political activists and community workers. My father was a very successful farmer in the Underberg district. He owned lots of wonderful farms. In his mid 40s, he kind of had this epiphany where he decided he couldn’t live the life of this very rich white farmer. did inherit the farms. He was part of a family that had farms in the area, but he built up his own. He was part of the Liberal Party. He’d always been very politically active and he’d been brought up by the maid.

He spoke fluent Zulu and kind of considered her more his mother, then his real mother. When he went to visit the maid, everyone was starving. He was a dairy farmer and they were spilling the milk down the drains to keep the price up, creating artificial shortages. He just suddenly decided he couldn’t do this. He sold his farms, bought a Kombi and travelled around doing a range of different work, being harassed permanently by the police.

He started an organisation called Kupugani, which was like a range of food products – powdered milk, soya and stuff that had shops at hospitals around the country. People could buy this low cost, high protein food and continued his political work. My mother was a journalist who was asked to go and interview this crazy guy. She was 20 years younger than him. She’d been one of the last people to report on Mandela’s talk in Edendale, just before he was arrested outside Howick. She was also quite politically active.

[She worked for] The Star [and] Daily News. I guess the rest is history, but they moved to Msinga. They decided to find the worst possible place on the planet to do this work. My father said if we could transform a place that’s really bad agriculturally and from an income perspective, that’s an example for the rest of South Africa and Africa. So they chose Msinga. They’ve built a mud hut with no running water [or] electricity in the community. It’s always been an incredibly arid area.

My mother taught us at home under an acacia tree and we spend most of our life just hanging out with the local Zulu kids. We were brought up completely as Zulu kids. We were incredibly poor. We had nothing terms of modern conveniences. We washed in the river. My mother’s kitchen was a Kadak gas cylinder under a tree. We didn’t have anything like fridges.

It was an incredibly rich life. We were surrounded by hundreds of friends. We were completely accepted in the Zulu communities. We weren’t seen as white kids. We grew up really part of that community. We were disciplined. We were regimented in terms of stick fighting, in terms of this group fights that group and so on.

In many ways [we] never realised how poor we were. I mean, we would go to town and have meat and we’d say what died? Because the only time we had meat was when something died. It was rich in other things. When I look back on it now, many of the skills I learned – an understanding of culture, lifestyle and even business – came to a large extent from understanding how people lived in those spaces.

On his time in the army:

I went to the army and I loved it. I ended up causing all sorts of trouble. I was as fit as hell. I loved the army. You had these jokes of people going to the army from, you know, hillbilly families and saying, ‘wow, the food is wonderful. We sleep on a mattress’. I was that guy. I was like, the food was great. We had hot and cold showers. We ran a lot, but I was fit as anything. So I just carried on running.

I went to an infantry unit and I did incredibly well. I was one of their top troops, and eventually they decided to send us to Duncan Village in East London to do township duty. I actually said that I would go to Namibia, but I wasn’t going to go into a township, because I had such moral issues about military force in a civilian space. I refused to do township duty.

When I finished primary school, the government said to my parents that they wouldn’t allow us to continue with home schooling, because the kids had to be exposed to other kids – meaning white kids. My father said, ‘well, they’re exposed to hundreds, if not thousands of kids in the valley’. The government said no.

You had to get permission in those days to do home schooling. They withdrew the permission. My father was offered by one of his friends for me to go to Michaelhouse. He flatly turned it down and said, we need to learn of life as it is. They sent us to Greytown High School – which had a complete mix of the greatest people and the most conservative people.

Some of the people were policeman’s sons who hated my father. I wouldn’t say we were bullied, but we were kind of harassed about our beliefs and stuff, so there was teasing. We had lots of that and a couple of the teachers were mean as anything. But overall, no. Nothing that ever really rocked our boat.