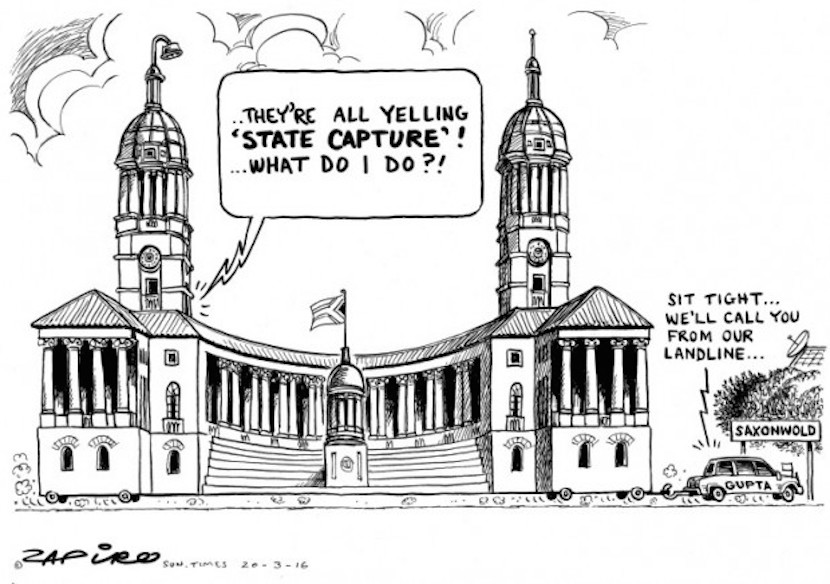 South Africans often lament the state of things – social, political and economic in the country. After all, we have many serious problems to contend with. We are not lucky enough to live in a place where a fifteen-minute bus delay makes headline news. It’s easy to become bogged down in the mess. Chuck Stephens has changed his focus this Easter, choosing to look for the bright spots such as state re-capture that are slowly moving South Africa towards renewal. – Melani Nathan

A message of hope in the midst of despair

This week I was lamenting how the Judiciary seems to be sagging and toothless. After waiting almost five years for a case to come to trial, we finally got going on February 19th. On that day, our attorneys asked for the whole case to be dismissed and explained why – including a deluge of case-law. The judge said to come back on March 3rd for an answer. On that day, we were told that the judge was on sick leave – to come back on March 17th. St Patrick’s Day! Being of Irish descent, I was hoping for some good luck. But alas.

On March 17th we learned that it was the judge’s first day back at work after a long sick leave. He had not finalized the judgment, and a new date had not yet been set. In the light of Loyiso Jafta’s testimony to the Zondo Commission – that billions of Rand were siphoned off of the State Security Agency budget, partly to undermine the Judiciary – one cannot help but wonder if this judge was for sale.

But then I started to count my blessings. For that same day, parliament voted to advance to the preliminary stages of impeachment proceedings against the Public Protector. Thuli Madonsela was a hard act to follow, but her successor turned out to be a sycophant. Anyone who has followed the Zondo Commission knows that weakening the Judiciary was a strategic imperative for Zuma’s cabal.

Then I remembered that Shawn the Sheep is but a fading memory now. The NPA has been re-captured. Thank God for Shamila Batohi. And Bongani Bongo is finally going to face the music for his indiscretions in Mpumalanga’s Human Settlements Department. Millions of Rand were siphoned off, to buy farms that could not even be used for housing! Go figure how arrogant these looters were. This was triumphalism at its silliest. But he pocketed enough to pay the premier who on the street was called “Mr Twenty Percent”. It must have been generous because he was bounced from being a desk officer at Human Settlements to being an MP in 2014. Then from being a back-bencher in parliament to being Minister of State Security in 2017.

He replaced David Mahlobo there – another sycophant if there ever was one – who Zuma moved to the Energy portfolio in his last (midnight) cabinet shuffle. He must have still been hoping to push through a Nuclear Deal in those last months before he was recalled? But now we can only hope that the SSA has been re-captured. Certainly, the transparency of its DG Loyiso Jafta at the Zondo Commission was a good sign. (Although his boss Minister Dlodlo tried to block him from testifying.)

Gone are the Guptas, it is doubtful that they will ever return. Jacob Zuma appears to be cornered by two forces – testifying at the Zondo Commission and his long-awaited trial. He is trying hard to play political games to escape his future in jail. Not only is there a new President, but the Presidency has been re-captured. So have so many of the SOEs, which were corrupted by the Guptas. Take Eskom as an example. Molefe is another fading memory probably facing jail time, and his successor de Ruyter has just welcomed an investigation into allegations made against him! Imagine! That is unprecedented. He is proving to be as deft an Admiral as his namesake.

The Premier League is another quasi-institution that has gone down, although the Unholy Trinity is still hanging on to its three respective power-bases. Magashule is under heavy pressure to stand down pending his trial later this year (if the Judiciary doesn’t buckle first). Mabuza is busy with his re-branding project, although he has never even been exonerated by the ANC’s Integrity Commission. And Supra is still trying to hang onto his legacy.

Aside from the individuals, let us count our blessings in terms of the state organs that have been re-captured: the NPA, the Presidency, so many SOEs like Eskom, the State Security Agency, the Premier League, and now the Ombudswoman (public protector) is under investigation by parliament.

What about the recent run at the Chief Justice? His appeal could reveal that it was just the latest round in a cynical effort to try to weaken the Judiciary. Those who support him and his appeal are in the huge majority.

Certainly, we are making progress. But it is taking time. If the Judiciary buckles under load, it will be hard to clean up the mess that the Zondo Commission has brought out of darkness and into the light. That is why the forces of darkness have tried so hard to weaken it.

The predominant theme of Easter is resurrection. Let us pray for a new form of resurrection – State Re-capture. South Africa has a history of pulling back from the brink of disaster just in time. May it happen to us again. God help us.