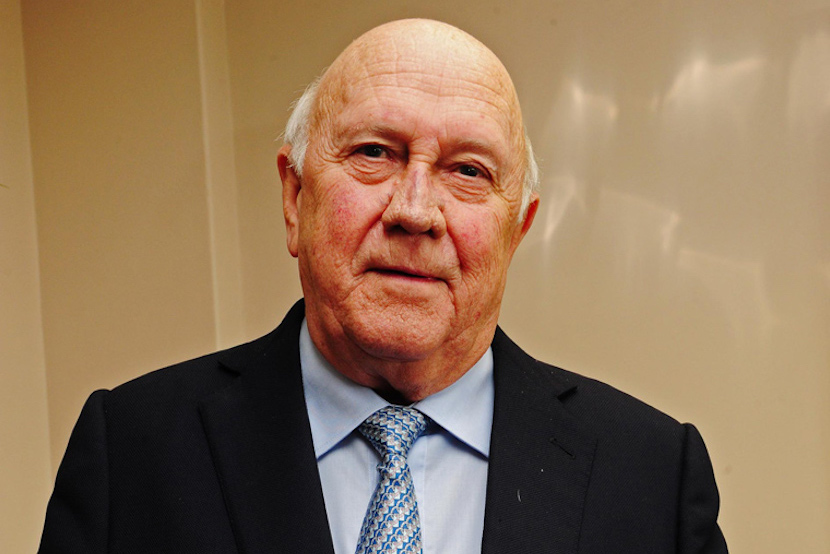 Former president FW de Klerk is known to most as the last president to serve under South Africa’s oppressive apartheid regime. The former National Party leader – who celebrated his 85th birthday recently – often comes under attack from all sides, according to the FW de Klerk foundation chairman, Dave Steward. ‘de Klerk is disdained by some in his own country’, writes Steward. ‘By woke journalists and commentators; by the ANC who insist that they forced him to end apartheid – and by the right – that excoriates him as a sell-out. There are also those in the centre who agree that transformation was necessary – but believe that they could have managed it so much better’. – Jarryd Neves

The crucifixion of FW de Klerk

In his recent article on “The Crucifixion of FW de Klerk” News24 journalist Pieter du Toit writes, with very little sympathy, of the growing rejection of the former president’s legacy. De Klerk, who announced on his 85th birthday on 18 March that he is suffering from mesothelioma – a cancer that affects the tissue lining of the lungs – and has just begun a course of immunotherapy.

Du Toit compares de Klerk with Mikhail Gorbachev who was described by Barack Obama as “…a strangely tragic figure…who was a largely disdained…in his own country.” He is right: there are elements of tragedy in De Klerk’s present situation. King Lear came to mind on 13 February last year as he and his wife Elita sat with quiet dignity in the gallery of the parliament that he helped to create, while he was howled at for over an hour by rampaging red-clad EFF MPs.

de Klerk is disdained by some in his own country – by woke journalists and commentators; by the ANC who insist that they forced him to end apartheid – and by the right – that excoriates him as a sell-out.  There are also those in the centre who agree that transformation was necessary – but believe that they could have managed it so much better…

That is where the similarity between de Klerk and Gorbachev ends. Gorbachev wanted to reform – and not dismantle – communism. It was never his intention to abolish communism or to break up the Soviet Union. He completely lost control of his reform process and was swept aside by the forces that he unleashed.

de Klerk – by contrast – set out from the beginning of his presidency to abolish apartheid and to negotiate a new non-racial constitutional democracy. As Niccolò Machiavelli observed six hundred years ago “There is nothing more difficult to take in hand, more perilous to conduct, or more uncertain in its success, than to take the lead in the introduction of a new order of things.”

So it proved with South Africa’s transformation – and yet de Klerk held the process together for four tumultuous years. His unique contributions were his realisation, after the fall of the Berlin Wall, that the time would never again be so favourable for successful negotiations; the speed and decisiveness with which he took all the steps necessary to launch the process; and the skill and perseverance with which he kept the negotiation roller-coaster on the tracks – despite numerous crises, bitter criticism, faceless violence, and walk-outs by the ANC and the IFP. Remarkably, he succeeded in keeping his support base together despite all the crises that it was experiencing. He won 69% of the support of the white electorate in the referendum of March 1992. There were no defections from his cabinet or caucus – and in the 1994 election he won the support of a majority of all South Africa’s minorities – as well as the votes of more than 500 000 black South Africans.

Other leaders would either have withdrawn into a grim and ultimately suicidal lager – or would have fallen into the Ian Smith trap of making piecemeal concessions and negotiating a final deal only after the balance of forces had swung decisively against them.

de Klerk’s leadership led to the adoption of an interim constitution in December 1993 that that achieved nearly all the goals that he had set on 2 February 1990. It involved painful compromises by all sides – including the ANC – and provided the foundation for our present battered – but still functioning – constitutional democracy. De Klerk could have withdrawn into comfortable and well-earned retirement but has instead spent the past 27 years trying to defend the constitution that he helped to negotiate against erosion by the National Democratic Revolution.

Du Toit claims that “De Klerk has never shown signs that the… dismantling of apartheid… was borne from any moralistic or ethical consideration”. This is simply untrue. de Klerk has repeatedly stated that his prime motive in initiating the transformation process and in abolishing apartheid was his deep conviction that it was morally unacceptable. Equally untrue is Du Toit’s accusation that de Klerk never apologised unreservedly or unconditionally for apartheid.

On 15 May 1996 he gave a full and unconditional apology before the TRC. He has apologised for apartheid on many, many occasions since then – but never frequently enough for his critics. On 1 October last year he reaffirmed, once again, the need to apologise for the harm inflicted by apartheid – “as I have done, with genuine sincerity, on numerous occasions. My apology is not just words and lip service. It is grounded in a deep and growing understanding of the pain, humiliation and damage that apartheid has caused for a majority of all South Africans.”

But much more important than verbal apologies was the action that de Klerk and his colleagues took to end apartheid for once and for all by repealing the last apartheid laws and by opening the way to a non-racial constitutional democracy. They did so despite the enormous risks involved; despite their overwhelming military power and despite the fact that, even with sanctions, the economy was still growing by 2,7%.

Their action in contributing to the transformation of South Africa is now being airbrushed out of history by the commentariat and the ANC – which has declared its intention of depicting pre-1994 leaders as “folk devils”. However, without De Klerk’s contribution the lives of everyone who has lived in South Africa during the past 31 years (including Mr Du Toit’s?) might have been very different – and in all likelihood – very much more problematical. As President Mandela observed, at De Klerk’s 70th birthday in 2006:

“There is almost unchallenged recognition and appreciation that without the courageous foresight of FW de Klerk we might well have descended into the destructive racial conflagration that all were predicting… What more can I add but to repeat what I have said so often over the last 16 years? You have shown courage as few have done in similar circumstances.”

15 years later, in the age of critical race theory and pervasive “white guilt”, de Klerk’s legacy is no longer unchallenged – or much appreciated. The man who dedicated his presidency to the abolition of apartheid and who succeeded in the difficult, perilous and uncertain task of introducing “a new order of things” – is usually labelled as “the last apartheid president”.

It is a bit like calling Abe Lincoln “the last slavery president.”