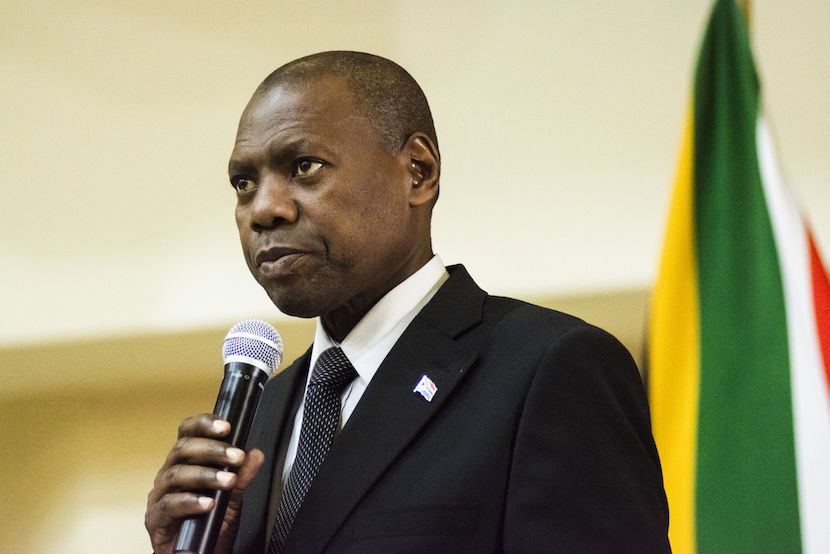 The trial-by-media of SA’s health minister Zweli Mkhize is approaching a critical point. Since the publication of his rational but now seemingly flawed public statement, Mkhize and his co-accused have gone to ground. Requests for clarity to the former KZN Premier and his erstwhile comms head Tahera Mather were seen but not responded to. Such silence speaks volumes. This article was first published on medicalbrief.co.za. Read the original article here. – Alec Hogg

Health Minister Dr Zweli Mkhize faces further problems — as well as resignation pressure — with revelations that the communications company that got “highly irregular” Department of Health tenders paid for work at a property owned by Mkhize’s family trust, as well as transferring R300,000 to his son’s business and buying it a R160,000 bakkie.

On Friday (28 May), when unexpectedly questioned on the matter at a press conference with French President Emmanuel Macron, President Cyril Ramaphosa asked to be given time to consider the allegations against Mkhize. Ramaphosa said: “”The SIU is looking into this matter, so I am waiting for the SIU to finish their report. There has been a preliminary report and investigation at departmental level and the Minister has briefed me. I am waiting to see how the SIU will conclude on this matter.“”

Ramaphosa said he knew the matter was being treated seriously as the SIU was “”working fast and feverishly to come up with a report“”. Responding to calls for Mkhize’s dismissal or resignation, Ramaphosa responded: “”I hear there are calls being made and I have heard them. I would like to see the SIU report and to look at the matter closely myself, and thereafter take the matter forward.“”

However, there is some speculation that Mkhize’s departure is imminent. News24 wrote yesterday (2 June) that “Mkhize’s backers from KwaZulu- Natal and the Eastern Cape have sought to convince him to voluntarily step aside in the wake of the scandal plaguing his office. Two sources familiar with discussions said Mkhize appeared to be compliant with the suggestion and was working out the mechanics of his departure.”

In the same News24 report,  the ANC integrity commission’s chair George Mashamba is quoted as saying that Mkhize should have approached the commission to explain the situation around his department’s contract with Digital Vibes.  Mashamba said the commission would be meeting on Saturday (5 June) and was likely to write to Mkhize to invite him to appear.

Daily Maverick‘s investigative journalism unit Scorpio this week further revealed that Digital Vibes, the communications firm at the centre of an alleged corruption storm over a R150-million contract from the DoH, made at least two payments to a contractor for maintenance and repair work at a Johannesburg property owned by Mkhize’s ZLM Trust. Digital Vibes made two payments, one in June and the other in July 2020, totalling nearly R7,000 to settle invoices from an electrical contractor for work at an upmarket townhouse in Bryanston, Johannesburg.

At the time, the property was owned by the ZLM Trust. One of its three trustees is Dr May Mkhize, the minister’s wife. Crucially, the minister’s surname and cellphone number are listed on the contractor’s invoices.

Digital Vibes also transferred at least R300,000 to a company owned by Mkhize’s son. The latter payment was made in May 2020 to All Out Trading, an entity whose sole director is Dedani Mkhize (33).

Documents also reportedly reveal that Digital Vibes in May 2020 transferred R160,000 to a Pietermaritzburg car dealership for a 2003 Toyota Land Cruiser. The car was subsequently registered in Dedani Mkhize’s name. According to photographs posted on social media, the vehicle has been put to use at a farm near Pietermaritzburg owned by the Minister’s son.

Our latest revelations seemingly contradict earlier denials from Mkhize that he had not benefited from the deal, writes Daily Maverick.

Responding to queries, Dr May Mkhize confirmed that the Bryanston townhouse was a “family property”, but she strongly denied any knowledge of payments from Digital Vibes for the maintenance work. Mkhize said she was “shocked, to say the least, how maintenance of a family property would be linked to this irregular contract”.

“I want to categorically state that I have never ever had any dealings with Digital Vibes or requested financial favours from them.”

The ZLM Trust sold the property in February 2021, according to deeds office records.

It seems highly probable that the payments from Digital Vibes to the electrical contractor and to Dedani Mkhize’s company were directly linked to the DoH contract.

During the period in 2020 during which Digital Vibes made these transfers, almost all of the money the company received came from the DoH. Its only other source of income were two transfers totalling less than R450,000 from the Municipal Infrastructure Support Agent (MISA), according to financial records.

These were the final payments for a communications contract that MISA, an entity of the Department of Cooperative Governance and Traditional Affairs (Cogta), had awarded to Digital Vibes in 2018. At the time, Mkhize was the minister for Cogta.

Tahera Mather and Naadhira Mitha, Mkhize’s long-time associates and the alleged masterminds behind Digital Vibes, did not respond to queries.

The Sunday Times reports that questions were being raised regarding Mkhize’s signature on contracts, which was flagged as irregular by an independent probe conducted by financial auditors and tax consultants Ngubane & Co. DoH Director-General Sandile Buthelezi however told the Sunday Times it is a practice of long standing in the department for the Minister to sign a submission after a contract has been approved by the accounting officer.

Buthelezi obtained a legal opinion that disagreed with the Ngubane & Co finding. The opinion stated that there is no law prohibiting Mkhize from signing after the DG had approved a contract. Buthelezi said it was clear that Mkhize had done nothing irregular by signing the submission that came to him for approval. Buthelezi also told the Sunday Times that after the Ngubane & Co findings, Mkhize initially vowed never to sign another document.

The DG insisted that Mkhize is not involved in the decision-making process of submissions he approves, and that his approval was at a policy level to support the procurement of services that further enhance the department’s ability to execute on its mandate.

However, senior government officials and Mkhize’s Cabinet colleagues said his actions were not allowed under the Public Finance Management Act or National Treasury regulations. Public Service & Administration Minister Senzo Mchunu said Ministers were not expected to sign any documents related to procurement. ‘I wouldn’t know what happened at the Health Department. What I know is that Ministers don’t sign anything related to procurement contracts. That is why you have accounting officers,’ he said.

Speaking at a briefing held by the SA National Editors’ Forum, the Special Investigating Unit (SIU) said its probe into the DoH’s contract with Digital Vibes was at an advanced stage. SIU head Advocate Andy Mothibi said the SIU was going through all the payments and invoices related to the R159m contract so that it could stop payments where necessary.

Mothibi said the investigation was looking at “quite a number” of private individuals, officials and companies. If there were irregularities, SIU would look at recovering all the money spent on the contracts.