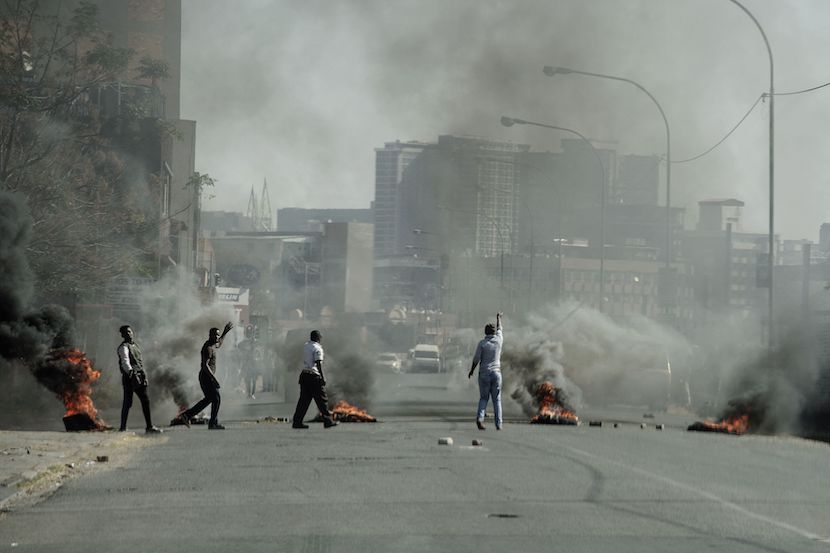 South Africa is still coming to grips with the events that rocked the country last week. Looters, violent protesters and rioters descended upon pockets of Gauteng and KwaZulu-Natal, leaving death and destruction in their wake. As reported by Bloomberg, at least 215 people have lost their lives in the midst of this civil unrest. Businesses were severely affected too, with the Consumer Goods Council of South Africa reporting an estimated R5 billion lost during this tumultuous time. Below, KZN-born former Sunday Times editor Brian Pottinger writes that “the insurrection will no doubt be suppressed, my province will return to its fraught peace but the damage to South Africa and the country will be lasting.” This article was first published on unherd.com. – Jarryd Neves

South Africa is on the brink

For the first time, people appear afraid for the future

The province of my birth is burning. Looters, using the excuse of the incarceration of former President Jacob Zuma, have laid an unimpeded trail of violence, arson, assault and damage across KwaZulu Natal, traditional home of the Zulu people.

Armed volunteers mount barricades at the entrances to my village while youngsters on trail bikes scout through the perimeter cane fields. There is no available food or fuel and the chat groups buzz with an incessant flood of posts about destroyed buildings, burnt cars and roaming mobs. The State is entirely absent.

For the first time, ordinary South Africans, bomb-proofed through decades of tumult, appear afraid for the future.

The democracy bought into existence 27 years ago after a negotiated truce between armed contestants, only some of whom were white, is facing its biggest challenge. Now it is not only the disgraced Zuma that is in the dock. It is also the current President, Cyril Ramaphosa.

The immediate spark for the conflagration was when, on 29 June this year, former President Jacob Zuma was ordered to serve 15 months in prison for refusing to appear before the Commission of Inquiry into State Capture — ironically a commission appointed by Zuma himself to investigate allegations of widespread corruption.

The response from political and even criminal forces, some of their leaders once office-bearers in the ruling African National Congress, was swift. They have mustered under the banner of something called Radical Economic Transformation which translates in method to the violent appropriation of wealth and in consequence to utter desolation. It is a more ambitious form of looting than the one currently on our television screens.

The incumbent, President Cyril Ramaphosa, was widely hailed on his election as leader of the African National Congress in 2017 as the saviour of the nation, a Mr Fix It Extraordinary with a luminary history in the trade unions, business and the negotiations that led to political emancipation. His promises of a New Dawn struck a resonance with a public desperately tired of the collapse in public morality and the accelerating race towards a failed state. Tragically, it has thus far proven a false dawn. The public anger is now palpable and dangerous.

I knew Cyril Ramaphosa when he was Chairman of the publishing company in which I was Editor and later Publisher of the South African Sunday Times, then the largest circulation newspaper in the country. I believe him to be an honourable and decent man, but not an effective one. He showed an almost obsessive desire to avoid confrontation, a preference for working through third parties and, later, a fierce aversion to taking tough decisions if it would affect party unity. More than once he privately confessed that he was a master at dancing on eggshells.

The hard decisions, like weeding out the criminals in his party, were outsourced to the Courts, the Commission of Inquiry into State Capture, the media or political hitmen in his own party. Thus, he retained a serene, surreal aloofness amid the growing signs of chaos, division and policy-failure around him, restricting himself largely to sepulchral public utterances on safe-zone topics like gender-based violence, Smart Cities, Covid-19 and platitudinous statements of good intent. This rule-by-remote has born a bitter fruit.

Shortly after my appointment as Editor of the Sunday Times in 1996, I made a point of engaging the newly-elected ministers in the ANC Government. Invariably I was asked what I perceived to be the greatest challenges facing the infant government. Always I replied: the loss of the nation’s precious skills and investment resources. The caution was obviously lost in the translation.

Under the guise of redistributive economic programmes, the ANC ushered in the policy of Black Economic Empowerment. Whatever its good intentions, it turned into a one-way flow of money extorted with state sanction from private or public purses into the hands of a monstrously avaricious new elite. The proceeds were instantly monetised and consumed in a style that would put a Byzantine court to shame. This has not gone unnoticed by the people burning the malls today.

To gain control of the state, the ANC followed a policy of “cadre deployment” of party faithful to occupy every level of government. Unable to even manage its own party affairs, they had no hope of managing a modern state. Everywhere there was dysfunction, collapse and corruption, the burden again borne most heavily by the poor. Across the spectrum, the internal party factionalism was replicated by the “deployees” in the State Departments.

The amounts stolen in the so-called State Capture project is dwarfed by the loss of wealth, tax, opportunity and confidence caused by the twin policies of black empowerment and cadre deployment, the core enablers of State Capture. Yet a generation after political emancipation, President Ramaphosa still refuses to renounce or even modify either policy. That has been his first great lost opportunity.

The second was not to appeal over the heads of his own party to the country for support for a genuinely reformist programme when elected in 2017. Granted, his election as leader of the ANC was a near-run thing and to this day there persists the claims by his opponents that he bribed his way to victory in the party’s elective conference.

Others suggested that he needed time to win over his suspicious caucus, many members with bank accounts that could hardly bear forensic scrutiny; more time to dance on eggshells. Perhaps, but the delay has proved mortally damaging to the nation

The Commission of Inquiry into State Capture under Deputy Judge President Raymond Zondo has ploughed its way through thousands of hours of testimony in its 38-month existence, minutely confirming the media’s decade-long reporting about how bad things really were during the Zuma years. If this was intended to placate the public, it did not.

The endless delays in commencing criminal procedures because of the devastation of the criminal justice system by a toxic combination of “cadre deployment” and criminal intent, further eroded confidence. Thirty or so good investigators, auditors and prosecutors with support staff, immediately hired from the private sector or from abroad, would have done what the Zondo Commission could not do: put the culprits in prison quickly and at a fraction of the cost… but that would have required a hard decision from President Ramaphosa.

Enthralled by the Soprano-style tale of warring ANC factions daily playing out in the Zondo Commission, the public easily forgot to ask the big question: how well was President Ramaphosa governing?

He has failed to repudiate any of his predecessors disastrous policies: seizure of land without compensation; the Government’s land redistribution policy which has seen productivity of transferred land fall by 87%; the free tertiary education policy which has turned once great universities into day-care centres for uneducated young people; the highly restrictive labour policies or the huge state social welfare and public service bills. All of this compounded by a mismanaged and inappropriate State response to the various recent coronavirus outbreaks. Serial lockdowns have massively affected employment and driven urban and rural poverty, particularly in KwaZulu-Natal.

The consequence has been stuttering economic growth and the highest youth unemployment rate in the country’s history, many of the unemployed now playing cameo roles on our television screens as the malls burn. No society can or will endure such casually-inflicted pain.

But perhaps the worst consequence of Ramaphosa’s rule-by-remote, and expulsion-by-commission, has been the creation of space for his opponents to mobilise, mainly in their heartland, the province of KwaZulu Natal, from whence Jacob Zuma and many supporters hail, where his main ethnic power base lies (although by no means do all Zulus support Zuma) and where my family has lived for five generations. Throw in legions of unemployed and one has a volatile mix.

The violence has completely overwhelmed an already incompetent police force: there have even been instances of local communities supporting recently arrived reinforcements with food and munitions because they arrived so unprepared.

For years the ANC-controlled province, often cruelly dubbed the Sicily of South Africa, has been the site of growing insurrectionary activity: hijacking of transport on main routes, seizure of schools and universities, xenophobic outbreaks, sabotage of municipal infrastructure, mafia-style blackmailing of construction companies, violent factional wars by ANC claimants to office, and wholesale corruption in public affairs (even as Zuma was entering incarceration, the pro-Zuma mayor of the province’s largest city was facing charges of corruption, along with 16 councillors). The perpetrators have acted with impunity and a growing boldness presaging today’s crisis.

All of this has been compounded by a hiatus of authority in the Zulu Royal Family, traditionally a source of stability in the province’s rural areas, albeit a prickly one. The recent death of King Goodwill Zwelithini has brought a disputed succession and a fracturing of loyalties.

In short, the province is destabilised and trapped in a classic first phase of revolution, driven by what appears to be a determined yet still shadowy alliance of usurped politicians and opportunistic criminals. In the frame right now for being the instigators are renegade former — and possibly current — elements of the State Security Agency, which during Zuma’s years became a virtual in-house close protection unit to serve his personal and nefarious interests. Army and police loyalties are still unclear.

President Ramaphosa’s response to all this growing chaos through the months has been a Herculean detachment, punctuated by a few anodyne homilies, not unlike his unctuous and comfortless national television address on Monday night.

The insurrection will no doubt be suppressed, my province will return to its fraught peace but the damage to South Africa and the country will be lasting. This province, certainly, will never forgive President Ramaphosa for sacrificing it on the altar of his own weakness and unpreparedness.

And the bigger question will remain: will the Dancer on Eggshells see the latest outbreak of insurrectionary and criminal violence as a reason for another instinctive compromise? Or will he see it as an invocation to move forward with a bold programme of renewal which must inevitably include splitting his party, dumping many of its discredited and failed policies, and taking all necessary measures to return the country to stability. Those are essential precondition for progress. It is not looking hopeful.