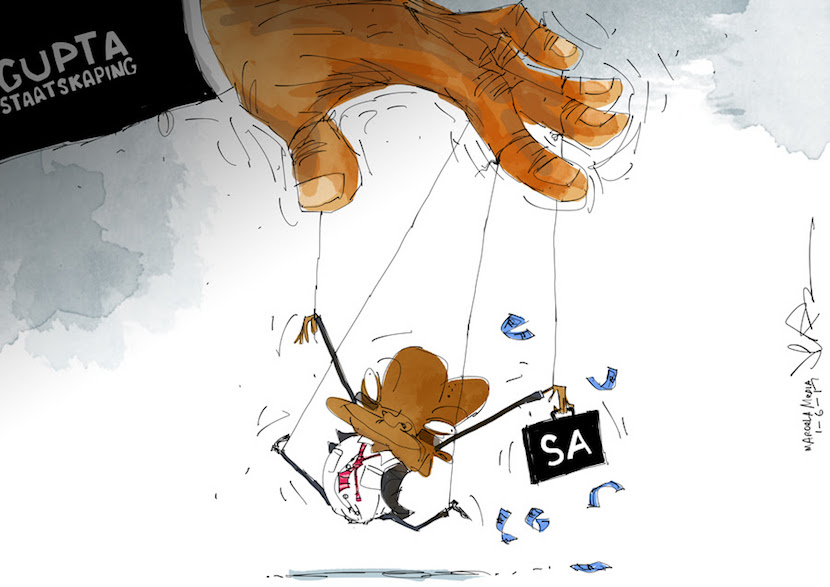 South Africa is no stranger to corruption. In fact, the two know one another rather well. The previous presidential administration had ties with the infamous Gupta family, who famously kept SA hostage while plundering and pillaging – and silencing observers with pay-offs or threats. Of course, it’s unfair to single out two of the many. Ace Magashule, myriad SOE execs and business people have all had allegations hurled at them, accusing them of one corrupt act or another. Unfortunately, due to our captured legal system, bringing them to book has not been easy. There are so many aspects to corruption in South Africa, one of which is “cadre deployment”. Below, Terence Corrigan unpacks what he refers to as “the original state capture”. – Jarryd Neves

Minerals Resources Minister and ANC National Chairperson Gwede Mantashe gave recently what might in hindsight be seen as the most important testimony before the Zondo Commission. The subject was cadre deployment.

Cadre deployment has been a feature of our lexicon since at least 1997. It is the idea that sits at the nexus between the ANC as the country’s ruling party and the state over which it presides. In broad terms, it was conceived of as a process by which the ANC sought to place its people in positions of authority in the state, as well as in other fields of influence.

This in turn would be through a system of deployment committees which would create an efficient, ordered system to ensure that the will of the party prevailed. The time for self-deployment was over, the party was told; and in these positions, its members were admonished that they would not represent the ANC only ‘after hours’.

At the time, the ANC represented this as a part of its ‘transformation’ agenda. ‘Transformation of the state,’ it said in a 1997 document, The State, Property Relations and Social Transformation, ‘entails, first and foremost, extending the power of the National Liberation Movement over all levers of power: the army, the police, the bureaucracy, intelligence structures, the judiciary, parastatals, and agencies such as regulatory bodies, the public broadcaster, the central bank and so on.’

In the event, it remains unclear just how widely the ANC established its party deployment committees, although a national one has certainly been acknowledged.

The word deployment has a particular ring to it. As Brian Pottinger wrote in The Mbeki Legacy a decade ago, it suggested order, discipline and purpose, almost military in style. This was always implausible, and within a decade, administrative failings and governance crises were calling it into question. As Pottinger put it:

Hardly had the edifice been crafted than it began to crack, as it inevitably would. The reasons were simple. The ANC did not have the skills base to control its own party efficiently, let alone the nation. Secondly, the deployment of inexperienced party figures into public-service offices led to a diminution of the offices themselves…

But the most serious effects of deployment were to be found when the one party in the (de facto) one-party state fractured in the run-up to the 2007 leadership elections. As the bureaucracy turned to counting who was pro-Mbeki and who was pro-Zuma, the already weakened professionalism of the public service took another nosedive. As directors-general hedged their bets by avoiding action on divisive policy issues, the very function of the public service became imperilled.

Pottinger was, of course writing with the defenestration of Thabo Mbeki and the pending Zuma administration in mind. What happened subsequently would only amplify the damage.

Gareth van Onselen wrote in a column earlier this year that while the ANC was fundamentally committed to the same measure of absolute party control in both the Mbeki and Zuma eras, Mbeki had a better calibre of person to work with. Under Zuma, he commented, ‘cadre deployment devolved into chaos deployment’. With some irony, the drive for political hegemony acted as a murky form of quality control, which gave way as the imperatives of patronage and self-enrichment took hold.

It is entirely appropriate that this should have been raised at the Zondo Commission.

Not only must cadre deployment be recognised as a direct contributor to the dreadful pathologies that the last decade has spawned, but cadre deployment suborned institutions to destabilise the political environment and skewed the functioning of the state. It undermined the constitutional requirement that the public service should be professional, development-oriented and that ‘no employee of the public service may be favoured or prejudiced only because that person supports a particular political party or cause’.

Where this has intruded into the less public recesses of the state – think of the intelligence community – it is utterly sinister. If anything, this was a more profound threat to South Africa than the mere looting of public resources.

Carl Niehaus, speaking some years before his financial peccadilloes became public and his reinvention as a face of radical economic transformation, described – probably unwittingly – the full pathology on display. There was, he said, ‘an expectation that the party line and leadership should be followed blindly, and that the judicial and democratic institutions of the state should merely be instruments to carry out ANC policy’.

There is an unfortunate sense of déjà vu here. The problematic nature of cadre deployment has long been recognised. Indeed, even at its outset, the ANC felt moved to pre-empt predictable criticism of the counter-constitutional nature of the programme. Extending the power of the ‘National Liberation Movement’ over what should have been impartial institutions, was – it implausibly claimed – ‘not in contradiction to the provisions of the constitution which characterise most of these bodies as independent and non-partisan’.

The damage that the practice was wreaking became steadily more apparent. A 2009 report outlining the depressing condition of South Africa’s municipalities, The State of Local Government in South Africa, pointed out that ‘a culture of patronage and nepotism is now so widespread in many municipalities that the formal municipal accountability system isineffective and inaccessible to many citizens’.

Yet the ANC has never moved beyond justifying the practice – as Minister Mantashe did – or promising to do it better. There are examples of the latter stretching back well over a decade. This line was reiterated sharply by Cooperative Governance and Traditional Affairs Minister Nkosazana Dlamini-Zuma last year in demanding that properly qualified cadres be deployed to the country’s ailing municipalities. From this perspective, it is not the concept that is a problem, but its implementation.

This is fundamentally mistaken, and observers who give this line of faux reasoning credit do no service to South Africa and its future prospects.

President Cyril Ramaphosa has made the building of a ‘capable state’ a centrepiece of his offering. When he discussed this in his newsletter earlier this year – ‘we are,’ he said, ‘committed to end the practice of poorly qualified individuals being parachuted into positions of authority through political patronage’ – this was hailed in some quarters as a turn away from cadre deployment.

Unfortunately, it likely meant no such thing. President Ramaphosa, in his incarnation as President Zuma’s deputy, was in charge of cadre deployment (and thus probably had a hand in some questionable appointments) and has never indicated any principled objection to the idea of cadre deployment. (The Democratic Alliance commented that South Africa needed to see the minutes of the ANC’s Deployment Committee meetings. It’ll never happen, but that would be an intriguing read.)

A step too far

As van Onselen noted, if Ramaphosa is indeed interested in a productive and meritocratic civil service, it will mean surrendering party power (and, one might add, rethinking a goodly number of other state and party priorities), not increasing it. Ideologically, this is a step too far. The Ramaphosa ideal is thus to do it better, Mbeki-style. Or, perhaps more accurately, Dlamini-Zuma-style.

This is a delusion. The relative talent that Mbeki could draw on has ebbed away, if not been driven away. More importantly, for all his faults, policy under Mbeki showed a modicum of deference to economic and social realities and was willing to at least defer some of its ideological yearnings into the future. Under Ramaphosa, the reverse is the case – even as the scale of South Africa’s economic and governance catastrophe looms ever larger.

The outlook on this front is not encouraging, and the longer this insidious practice endures, the greater the damage to our already weakened institutions. But for posterity, and in the hopes that some lessons may one day be learned, it is good that the concept has been raised before the Zondo Commission, for it was and remains the original state capture.