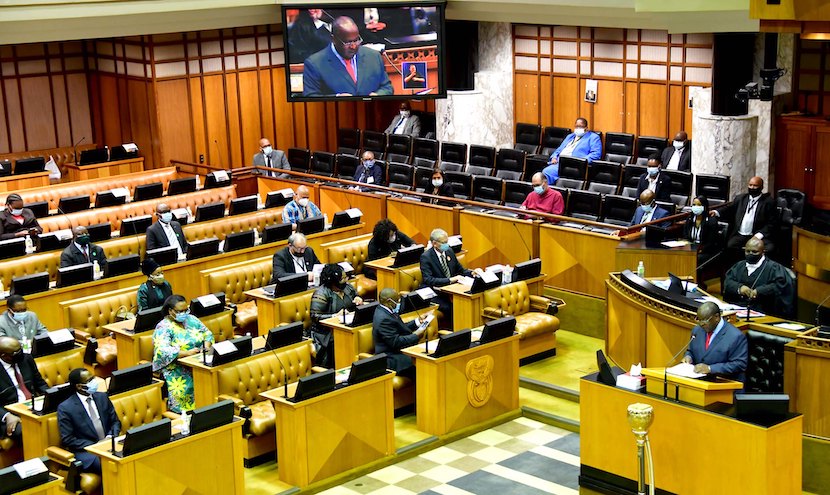 The tragic events that rocked parts of South Africa has highlighted, among other things, how poorly prepared the South African government was for events of this nature. Police stood by as looters pillaged and ransacked businesses, set malls alight and destroyed infrastructure. President Ramaphosa himself admitted that government was “poorly prepared” to deal with the violence that gripped KZN and Gauteng. In fact, numerous reports of ordinary citizens – from residents to taxi drivers – defending their local malls, businesses and neighbourhoods – have flooded our news and social media feeds. Heartwarming it may be, but it’s a poignant reminder that the government had, effectively, deserted its people. As MyBroadband reports below, the civil unrest “exposed the incompetence and lack of accountability in South Africa’s cabinet — especially the crime prevention and security cluster.” The DA’s John Steenhuisen has called on the President to dismiss Ministers Cele and Dlodlo from their roles. Steenhuisen noted that SA could not afford to have its safety and security “undermined by ministers who failed in their roles to pre-empt this sort of attack and defend its people.” Of course, this isn’t the first time someone has called on the ANC government to replace cadre deployed ministers with competent individuals. Below, MyBroadband compares SA’s Minister of Defence,  Nosiviwe Mapisa-Nqakula, with her US equivalent, Lloyd James Austin – a four-star general before being appointed Secretary of Defence. This article was first published on MyBroadband – Jarryd Neves.

President Cyril Ramaphosa acknowledged that the government was poorly prepared to deal with the public violence, destruction, and sabotage in KwaZulu-Natal and Gauteng.

Ramaphosa’s words to the nation, however, do not capture the extent of the complete absence of protection of South African citizens and businesses.

The South African Property Owners Association said the looting and vandalism cost the country about R50 billion and put 150,000 jobs at risk.

While the country was burning, police minister Bheki Cele and intelligence chief Ayanda Dlodlo praised the work of their departments.

It illustrated exactly how out of touch the ministers are with their responsibilities and what South Africans expect of the police and state security.

Sasfin Securities deputy chairman David Shapiro said the riots exposed is just how inept, ill-prepared, and inexperienced the ANC is in running the country.

It was not long before the blame game began.

Cele, however, said he did not receive intelligence warning of the violence in parts of Gauteng and KwaZulu-Natal.

He told Parliament he has never seen any intelligence document warning of the failed insurrection, hinting that Dlodlo lied about the information sent to the police.

Defence Minister Nosiviwe Mapisa-Nqakula also made headlines after she said she has no evidence to indicate that the unrest “talks to an insurrection or a coup”.

What made this statement stand out is that it followed Ramaphosa’s comments that the violent riots were part of an insurrection.

Acting Minister in the Presidency Khumbudzo Ntshavheni hit back at Mapisa-Nqakula, saying her statement that there was no evidence of an insurrection or coup attempt is not supported by facts.

DA leader John Steenhuisen has called for the immediate dismissal of Cele and Dlodlo.

He said that South Africa could not afford to have its national security undermined by ministers who failed in their roles to pre-empt this sort of attack and defend its people.

Many other people have also called on Ramaphosa to change his cabinet and replace political cadres with competent technocrats.

South Africa versus the United States

Many experts said the problem with cabinet appointments is that the ANC government uses them as rewards for political loyalty.

Instead of picking the best people for the job, cadre deployment has dominated ministerial appointments over the last two decades.

In advanced economies, like the United States, suitably qualified and experienced people are typically selected to important cabinet positions.

Take the Department of Defence, for example.

In the United States, the Secretary of Defence is typically a former general with decades of experience in the army.

The current Secretary of Defence is retired general Lloyd Austin who spent over 40 years in the military.

Our minister of defence, Nosiviwe Mapisa-Nqakula, did not serve in the South African National Defence Force at all before her appointment.

She did receive some military training in Angola and the Soviet Union and served as the head of a commission that investigated desertions of ANC MK members to the United Nations High Commissioner for Refugees (UNHCR) in Angola in 1984.

This is, however, a far cry for spending decades in the military and working your way through the ranks to become a general.

She is also not particularly qualified – she only completed a teacher’s diploma and project management qualification.

The infographic below compares the US Secretary of Defence to South Africa’s Minister of Defence. 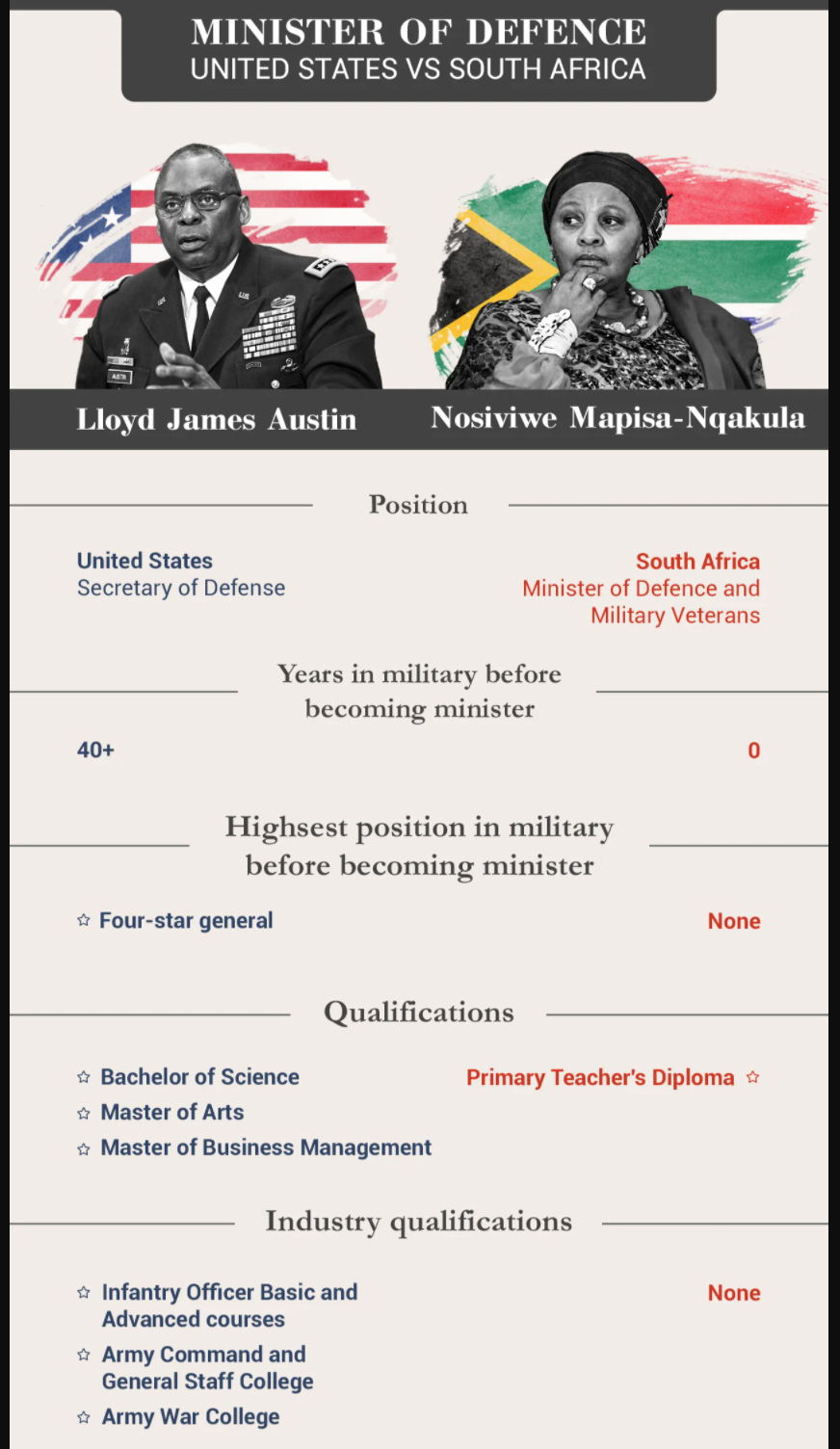