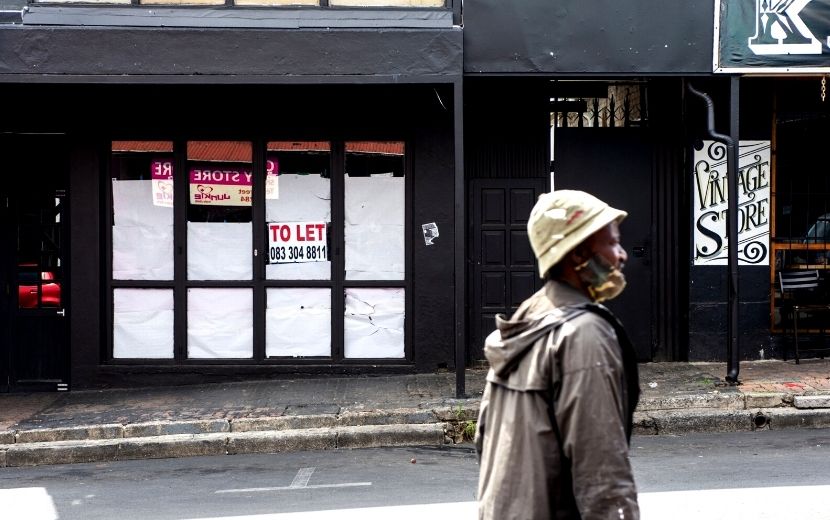 Released last week, South Africa’s latest unemployment statistics tell a chilling story. Currently, a staggering 34.4% (7.8 million) of SA’s are without work. The economy was already in poor health prior to Covid-19. The pandemic – and the resultant lockdowns – only made matters worse. While the statistics are shocking, some say they don’t tell the full story. In an interview with BizNews, GG Alcock told Alec Hogg that while the unemployment numbers are high, it’s “not a true reflection”. Alcock then cites the strong “backroom rental” sector – which, he says, is worth R20 billion a year. “That’s money that people – who may be formally unemployed – are earning. That is not measured in our numbers”. Below, Dr Mazwai notes that SA’s unemployment issue is at crisis levels and needs drastic action. “We cannot enjoy our sleep when over 30 million South Africans live on less than R1000 per month. Over two million of our people have food insecurity. In other words, they are not sure of their next meal.” – Jarryd Neves

The unemployment statistics released last week were the most frightening piece of news for the country – and this comes as we are still reeling from the July mayhem in KwaZulu-Natal and Gauteng. An unemployment figure of 34.4% is no chicken feed. We are at crisis levels – and let us remind ourselves, “South African lives do matter”.

Dealing with this crisis cannot be business as usual, where we meet as government and the private sector and discuss strategies. Then people must be trained to be entrepreneurs or plans are drawn etc. We need more drastic action. For starters, President Ramaphosa could decree that every Government department must within the next three months have created 500 jobs. After the three months they must provide him with the evidence.

For instance, why is it that the South African Police Service and other government agencies procure face masks from the private sector when they could get groups of youths make these? This is what I mean by real jobs. Ramaphosa then penalises those department’s that have not created live jobs. Until the whip is cracked, people will go on their business as usual. After all they are employed and have something on the table every night.

The private sector could then also throw in its bit but procuring masks from these small entities in the townships.  The FPM Seta has a project to train these young people and it can provide lists of young people who have started concerns making these masks.

The suggested approach kills two birds with one stone: it provides the youth with a skill and, secondly, gives them an injection of money they worked for – and not a grant. Grants strip people of their dignity and there is nothing heart-breaking as seeing adults in long queues for the R350 special grant. Heavens, have you imagined how these people feel as they stand in the cold or heat?

Furthermore, we must accept that the business-as-usual approach has not worked. As is usual, the announcement of the unemployment figures led to the expected business-as-usual response of bashing of the government, of course the African National Congress (ANC). This is not an ANC problem but ours as a nation.

We cannot enjoy our sleep when over 30 million South Africans live on less than R1000 per month. Over two million of our people have food insecurity. In other words, they are not sure of their next meal. Khwezilomso Mbandazayo of Oxfam can give you more harrowing details of the injustices meted out to the poor of South Africa and the world.

I visit Soweto regularly and, believe you me, the anger in the townships and rural areas is no joke. All it needs is a spark and we are back to July. People I grew up with confront me and accuse us of forgetting them and we are eating alone. Thus, it is critical is that we move fast as opportunists, scoundrels and rabble rousers who are once more going to use the anger and frustration in the townships and rural areas for their own ends.

In addition to the suggestions above, we need more innovative and aggressive approaches. For instance, the very innovation that created Bosasa could be broadened and fine-tuned to promote the growth of small businesses in a massive way. The Bosasa experiment was based on getting the private sector to provide food to patients and prisoners. It benefitted a few.

I am not interested in the corruption, but in the idea itself. This time the idea should result in getting cooperative owned by black women to provide food to these institutions. If we bring in the District Delivery Model into play, it means these coops could provide food to the prisons and hospitals in the district.

This approach could create new and formidable value chains stretching from the farming, the procurement of the inputs, the storage of the produce, the preparation of the food, its delivery and the quality control associated with food for hospitals and prisons. This, I add, would result in a multiplier effect that sees the growth of a service sector just linked to this value chain.

Finally, business as usual approach will not work. Since 1995 South Africa has initiated interventions to grow our small business sector, particularly for Black South Africans. Unfortunately, the interventions were promoted in a trading environment that, naturally, does not differentiate between mature entities and green shoots.

Hence, while we inherited an 18% unemployment rate in 1994, it has now ballooned to the new 34.4 and pre-Covid-19 it was 29%. The reason for the poor impact is that we ignored the embedded dynamics and constraints in the economy. The embedded dynamics include heavily concentrated sectors; value chains controlled by major players making entry difficult; and not exhaustively; the incumbents had deep pockets, the latest technology and a superior understanding of markets or products.

Resource Theory tells us that those with the resources will use these to advantage. As the operations in the market, such as mergers, discounts and/or sales were simply not BEE friendly and could not be, this resulted in black small businesses survive for just around 18 -24 months. This is when the loans or government support are all spent.

Thus, the big question today is whether these embedded dynamics have ultimately been taken into account? The narrative in the country does not indicate this. Yes, there is increasing talk on township and rural economies, but little is said of these dynamics.

Common sense exhorts us that if the dynamics that caused the previous failures are not taken into account, why must we expect different results?