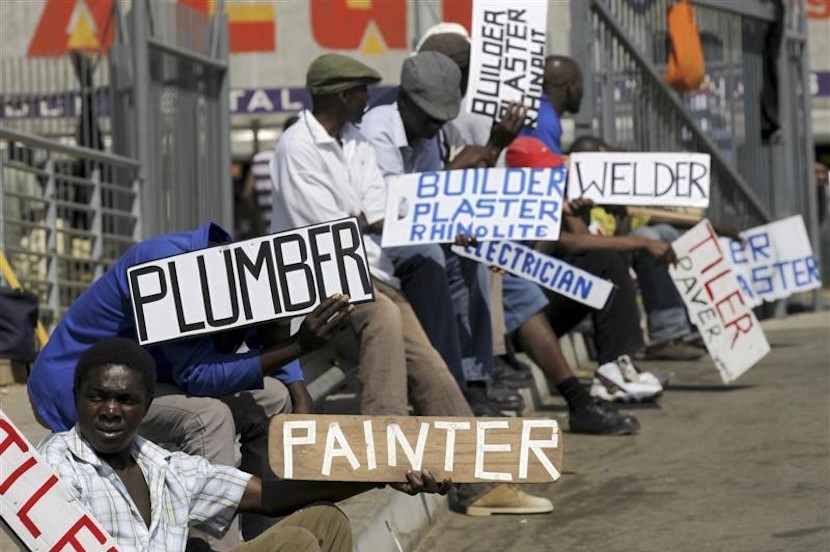 Covid-19 has only exacerbated the severe unemployment crisis facing South Africa. As the virus crept across the globe, many feared what it would do to the country’s ailing economy. As it turns out, those fears were justified. As the lockdown was implemented, many businesses had to close their doors for extended periods of time – often for the last time. Entrepreneurs had to let go of not only their dreams, but their employees too. This added to SA’s already alarming unemployment figures. As Derek Yu and Charles Adams write below, unemployment also adds to South Africa’s many other problems – “high unemployment may manifest in various social pathologies such as crime, poor health and, in the extreme, political instability.” As the duo demonstrate, the ten years succeeding the last decade showed more growth in terms of employment. “The relatively high-growth period of 2000-2007 saw a reduction in the absolute number of unemployed. The lowest level of unemployed occurred in the second half of 2007 (3.9 million) before steadily rising for almost the entire decade 2009-2019.” While Covid-19 certainly hasn’t helped, the country’s economy was clearly in dire straits for a decade before its existence. Are the years between 2009 and 2019 SA’s lost decade? – Jarryd Neves

By Derek Yu and Charles Adams*

Unemployment remains one of South Africa’s most pressing economic and social challenges. Over the past two decades it has also proved to be one of the country’s most intractable policy challenges. A plethora of policies and interventions have failed to make a difference.

High unemployment may manifest in various social pathologies such as crime, poor health and, in the extreme, political instability. The short-run effect of the COVID-19 pandemic has starkly worsened the problem.

Two policy responses to unemployment have often been emphasised: upgrading skills and liberalising the labour market. Neither has been well advanced. The reason is that the structural unemployment evident in South Africa is a multi-causal – and complex – phenomenon.

Our study, which was presented at the 2021 Economic Society of South Africa Research Conference, shows why. We analysed South African unemployment trends between 2009 and 2019 using data from the Quarterly Labour Force Survey. We broke it down to give a picture along demographic and geographic lines at the industry level. This allowed us to, indirectly, present an account of the relative success of strategies or policies to increase employment implemented over the past decade.

The long-term trends in labour market statistics tell a consistent story. Employment grew faster during the first decade of the century compared with the second. And unemployment started declining from 2003 but increased shortly before the great recession of 2008/9.

The relatively high-growth period of 2000-2007 saw a reduction in the absolute number of unemployed. The lowest level of unemployed occurred in the second half of 2007 (3.9 million) before steadily rising for almost the entire decade 2009-2019.

The figure also shows a decline in the number of employed following the 2008/9 great recession. Subsequent employment growth remained relatively constrained in comparison to the preceding decade.

The table compares labour market statistics for three points in time spanning two decades: 1999, 2009 and 2009. The difference in the proportional growth in the number of employed is large: 35% during the earlier decade versus 18% during the more recent decade. In combination with the more rapid expansion in labour participation rates during the 2009-2019 period, these trends saw unemployment increase significantly over this period (growth of 52% during 2009-2019 versus 40% during 1999-2009).

Notably, the youth share of the total employed decreased by 7.5 percentage points, from 28.6% to 20.1% over the two decades. In absolute terms the number of youths employed also decreased between 2009 and 2019. There may be several factors explaining this decline. But the rise in the number of young people not in education, employment or training is one of the more concerning factors.

On the employment front, it increased during the 2010s relatively more rapidly among the following people: Africans, males, 35-54 year olds, Western Cape and Gauteng residents, those with at least matric (12th year of schooling), as well as those working in large enterprises with at least 50 employees.

The industries that saw the most rapid increases and gross value added were finance as well as community, social and personal services.

There was a loss of employment in the manufacturing industry (a decline of 1%), which perhaps offers some evidence of de-industrialisation in South Africa.

When it comes to unemployment, the groups that had felt the brunt in earlier decades continued to do so: Africans, females, youth aged 15-34 years, job seekers without matric, as well as residents from the Eastern Cape, Free State and Mpumalanga provinces.

Two alarming findings are worth mentioning: 39% of unemployed people had never worked before, and the proportion of unemployed who spent more than five years seeking employment increased from 24.1% in 2009 to 35.9% in 2019.

These findings point to a possible skills mismatch in the system.

Skills development has proven to be a challenge for policymakers. South Africa performs badly in international standardised tests such as the Trends in Mathematics and Science Study (TIMSS) or Southern and Eastern Africa Consortium for Monitoring Educational Quality (SACMEQ). This reflects negatively on the quality of education being offered. This, in turn, constrains the capacity for people to develop skills later life.

It would be tempting to suggest that disproportional union power is a significant factor in explaining the country’s labour market outcomes, particularly if advancing the insider-outsider framework for South Africa’s labour market. The capacity for insiders to negotiate higher wages for themselves is often done at the expense of the unemployed. Those without jobs have a more difficult transition to employment as a result of the relatively high wages coupled with limited capacity to signal skills or ability.

The dislocation between training and employment opportunities is one area where policy may gain some traction. The suggestion that training programmes may have some merit as a policy response seems reasonable in theory. But such responses have, in practice, not resulted in meaningful improvements as measured by employment growth.

A logical next step is to understand which training practices may better serve to prepare youth for the labour market – and signal productivity to employers.

An often-discussed intervention is small business development. But research shows that it is mainly large firms that have been responsible for employment growth in South Africa. The relatively low level of entrepreneurial activity is also manifested in the country’s comparatively small informal sector.

The country’s fiscal position precludes the imminent rollout of a universal basic income. But the emergency introduction of incomes to unemployed individuals during COVID-19 shows that, at least administratively, it is feasible.

It has been suggested that the structural impediments to low-skilled employment growth are, perhaps for the foreseeable future, insurmountable. Taking this prospect seriously means entertaining policies that mitigate against a reality in which labour markets are unable to absorb supply. Despite its lack of popular or political support, the obvious candidate policy, in theory, is a universal basic income grant.

While the case for its implementation has been presented on grounds of anti-poverty, its practical feasibility has not been rigorously tested in the economics literature. This is perhaps due to it being viewed as patently unfeasible, from a fiscal point of view.