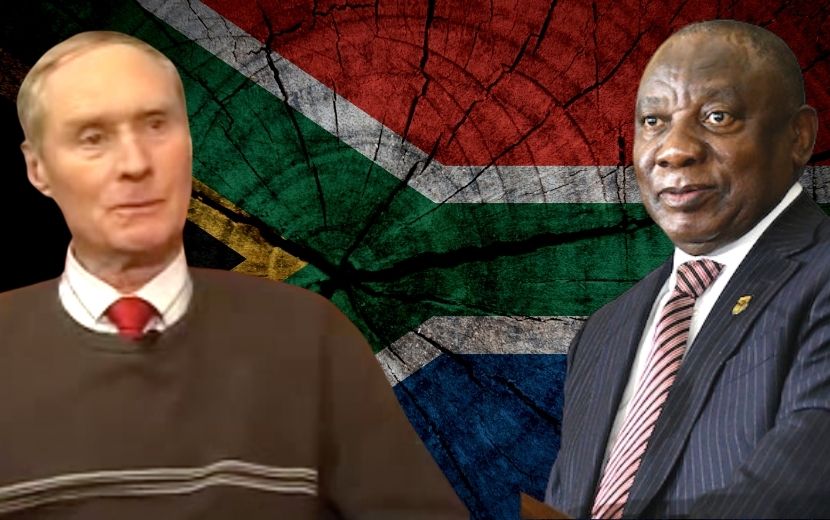 A report this week by Cofesa, the Confederation of Employers in South Africa, has warned that South Africa is flashing red for an Arab Spring phenomenon, similar to the uprising or revolution that led to regime changes across Northern Africa and the Middle East and led to the end of the regime of President Hosni Mubarak in Egypt. The study by Advocate Hein van der Walt and Dr Lawrence McCrystal draws stark parallels between the conditions that brought about the Arab Spring and those that are present currently in South Africa. Dr. Lawrence McCrystal, the Chairman of Cofesa, told BizNews that the ANC government needs to wake up, and that it can’t keep on ignoring large-scale unemployment in the country. Cofesa has submitted immediate solutions to the problem of unemployment to President Cyril Ramaphosa. – Linda van Tilburg

Dr Lawrence McCrystal on the conditions in South Africa that make the country vulnerable to experience an ‘Arab Spring’:

It is essentially unemployment. And the idea that emerged from the Egyptian case and spread across the Arab world was that a 30% level of unemployment is a kind of a cliff. And if you go beyond that, you’re going to start falling into the precipice. And we are way beyond that. Taking into account the people who have given up seeking jobs, we are at 44%. And in the age group below 35, we’re at 64% unemployment.

And that is just so unacceptable because these people are being deprived of an ability to stand on their own feet. And to try and solve it by handouts is actually aggravating the problem because handouts create an attitude of dependency and an attitude of entitlement. And you add those two together, plus an attitude of hopelessness on the part of the young people – it just needs one match to explode the thing.

On the tipping points or events that could lead to a revolution related to the postponement of local government elections:

Well, another July where people start saying, ‘Well, you know, I’m sick and tired of being hungry. I’m just going to go and take again.’ I think that’s the most likely. It could be something like that event [the arrest of former President Jacob Zuma], and they could attach it to that. But underlying it is the sense of hopelessness that I’ve spoken about on the part of the young people.

But in any event, what we must also bear in mind is that human beings need to feel that they are being productive. We have a need, an innate need for it. And to sit around doing nothing all day long is just not acceptable – especially if it’s accompanied by hunger and the feeling that they can’t feed their children.

We have a project running all over Africa where we teach people to stand on their own feet. They start little businesses and they are taught to save a little bit and they start growing food. [You] can’t believe how it changes their attitudes. Mothers say, ‘Wow, for the first time, I feel like I can feed my children. For the first time, I don’t sit around doing nothing all day long. For the first time, I feel like I am worth something.’ It’s all those sorts of things, you know, which is undermining the very fabric of our society. So we say that a government that ignores unemployment levels like we’ve got is just looking for trouble.

Well, if they’ve got nothing else, they’d rather have handouts. But, you know, the tax base is diminishing. The government finances are not in a good shape. And where does this money come from? You can’t go on and on and on taking from the people who are productive and giving to the people who are not productive.

On COFESA’s advice to government:

Well, essentially [it is to] focus on getting the economy moving, and there are some things that can be done very easily and very quickly. One of them is to deregulate small and medium enterprises. We in COFESA represent a huge section of the small and medium enterprises in the country. We’ve lost thousands of companies lately, in the last 10 years – literally thousands. And our manufacturing sector, which was one of the driving powers in our economy – it was over 25% of the gross domestic product [and] is now down to half of that.

So number one is do away with the regulations that are causing problems, and one of them is what are known as bargaining councils. The bargaining councils are representative of the trade unions and the corporates. They make decisions based on their negotiating. We in the small and medium enterprises have no representation there. And then the Minister of Labour – and Employment, by the way, he’s the Minister of Employment too. It’s a real paradox. You can’t be both. Anyway, he has the right to enforce the decisions of the bargaining councils on the whole sector, and that is creating huge problems for the small and medium enterprises because we cannot meet the levels that they negotiate.

So, we recommend to the government that number one, they do what Margaret Thatcher did way back in England when she did away with the bargaining councils, and that they do what they did in New Zealand. Also, to stop the trade unions imposing their will, because they’re the minority. The trade unions only represent a small minority of our workforce, and yet they are listened to and their wishes are granted and not the wishes of the unemployed.

So, there are two things they can do overnight. And then deregulate the private sector. Stop all these regulations. BEE assists about 50,000 people compared with unemployed people – 44% of our workforce is unemployed. Millions. BEE is effectively helping about 50,000 people – [this] is our estimate. And they get all the benefits; front for companies. I know fronting is supposed to be illegal, but it’s not being enforced. There are all kinds of things like that happening and the result is that companies are closing down, because they can’t meet these requirements.

So there are two things, and then there’s a third thing that they can do, and that is to give title to the properties that people are occupying. And that has a huge, beneficial effect because people start taking interest in their properties. They start spending money on them, which they don’t want to do if it belongs to the government. And then the third thing that they must do is stop this expropriation without compensation. All it’s doing is chasing investment away. Who’s going to invest in a country where the government has got a history of corruption and they’re going to be given the power to expropriate land without compensation? What’s to stop them from expropriating land and then using it to their own advantage?

On whether it’s dangerous to use the word revolution:

Well, we hope that it’s not going to happen. We are hoping that they’re going to get the message and prevent it. Because evolutionary change, if you look back at the 1980s and all the things that were happening, we were really made for a revolution. And yet we didn’t have it. And that was because the government of the day saw what needed to happen. And they did it.

On what South Africa needs:

That’s what we need [common sense]. And less of this attitude of ‘we want to control everything.’ Government’s got a history of taking control of things and then messing them up. Look at all the state-owned enterprises. Eskom, in its day, was one of the most efficient power producers in the world. It’s now one of the worst. So, you know, that’s just one example. Our railways and our ports were highly efficient. Now look at them. They’re struggling to keep up with what’s going on.

On COFESA calling for an ‘Africa Spring’ not a revolution:

A renewal, a revival, yes. A renewal and revival. That’s right. That’s what we’re calling for. And we’re saying that all the elements of bringing it about are there. They’re self-evident. So, that’s what we believe.