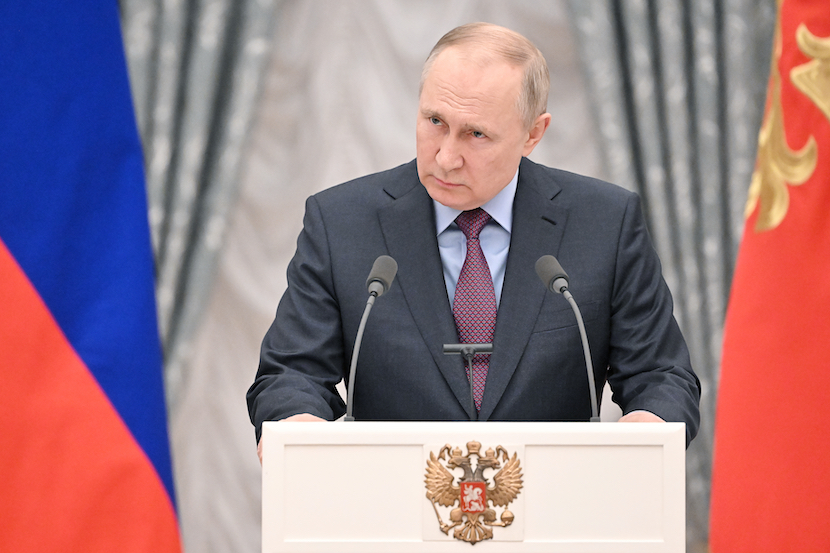 This article, by Moscow State University graduate Yuri Maltsev, a Free Market Foundation ‘luminary’ has two outstanding attributes. The first is that he outlines the full extent of the sanctions the world has imposed on Putin and his fellow oligarchs. The second is that he gives as close to an insider’s view as we’ve had of Putin’s motives and attempts at creating an alternative reality. I’d compare Putin with our own avid student of centralist Communist propaganda and shadowy intelligence work – and alleged wholesale national pillaging veteran – Jacob Zuma. His long walk to imprisonment is the very essence of the Stalingrad strategy. – Chris Bateman

It is obvious that the invasion of Ukraine was prompted by the inept Biden Administration and, especially, by its chaotic exit from Afghanistan. Putin was emboldened by the inability of the US and NATO to secure European borders and protect those who were promised to be protected. Signed in Budapest, Hungary on 5 December 1994, the Budapest Memorandum on Security Assurances comprises three identical political agreements to provide security assurances by its signatories relating to the accession of Belarus, Kazakhstan and Ukraine to the Treaty on the Non-Proliferation of Nuclear Weapons (NPT). The memorandum was originally signed by three nuclear powers: the Russian Federation, the United Kingdom, and the United States. The memorandum prohibited any country from threatening or using military force or economic coercion against Ukraine, Belarus and Kazakhstan. As a result of other agreements and the memorandum, between 1993 and 1996, Ukraine surrendered its nuclear weapons to Russia. Until Ukraine gave up its nuclear weapons, it had the world’s third-largest nuclear weapons stockpile after the US and Russia.

Ukraine suffered more than any other part of the infamous Soviet Empire under Soviet occupation. Holodomor – government-organised famine – resulted in nine million deaths, mass repressions, and Gulag deportations of another five million Ukrainians.

In the months preceding Putin’s invasion of Ukraine, he accused Ukraine of neo-Nazism, anti-Russian genocide, the repression of Russian speakers in Ukraine, and anti-Semitism. He also made multiple demands on Ukraine, NATO and the EU. These claims were his efforts to justify war. It is obvious that his claims of neo-Nazism and Russophobia were completely baseless.

In a 21 February 2022 speech, Putin questioned the legitimacy of the Ukrainian state, repeating a preposterous claim that “Ukraine never had a tradition of genuine statehood.” He described the country as having been created by Lenin. I believe that the main goal of Putin’s actions is the liquidation of Ukraine as a state. On 5 March 2022, Putin announced that “the question of Ukrainian statehood” could be raised.

To justify an invasion, Putin falsely accused Ukrainian society and government of being dominated by neo-Nazism, invoking the fake history of presumed Ukrainian collaboration German occupiers during World War II and echoing a theory that casts Russian Orthodox Christians, rather than Jews, as the true victims of Nazi Germany. While Ukraine has fringe political groups, like every other free country, there is no widespread support for the fringe ideologies of both the left and the right. Ukrainian president Zelensky is Jewish and was elected by 73% of the popular vote. His grandfather served in the Soviet army fighting against the Nazis and three of his family members died in the Holocaust. This does not sound like there is any base for Putin’s claim that the neo-Nazis took over Ukraine.

The great Austrian economist Ludwig von Mises wrote about “the barbarism of Moscow”. Today we can observe it witnessing unprovoked and criminal Russian invasion in Ukraine. David Targ wrote in 1952 “…is it not just as unthinkable that we would ever go to war with Canada, or with Great Britain for that matter? If there were ever to come a time of dispute between our country and Canada or Great Britain, it is unthinkable that we could not solve the dispute without recourse to war. This is so, not because we have a common government with them, for we do not. What we do have is a common understanding as to what is right and what is wrong.”

Putin issued demands to the US and NATO, including a legally binding arrangement preventing Ukraine from ever joining NATO, and the removal of multinational forces stationed in NATO’s Eastern European member states. He also threatened an unspecified military response if NATO continued to follow an “aggressive line”. These demands were widely interpreted as being non-viable. New NATO members in Central and Eastern Europe had joined the alliance because their populations broadly preferred to move towards the safety and economic opportunities offered by NATO and the EU, and their governments sought protection from aggressive and erratic Putin’s behaviour. The demand for a formal treaty preventing Ukraine from joining NATO was also seen as unviable by Western officials as it would contravene the treaty’s ‘open door’ policy, although NATO showed no desire to accede to Ukraine’s requests to join at this time.

In the days leading up to the invasion, the Russian government intensified its disinformation campaign, with Russian state media promoting fabricated videos (false flags) on a nearly hourly basis purporting to show Ukrainian forces attacking Russia, in a bid to justify an invasion of Ukraine. Many of the disinformation videos were poor and amateurish in quality, and evidence showed that the claimed attacks, explosions and evacuations in Donbas were staged by Russia.

It was a repetition of the propaganda war against the Republic of Georgia in 2007, which was followed by the real war.

So, what are the real reasons for Putin’s invasion of Ukraine? It surely is not the NATO membership nor presumed denazification of Ukraine or another propaganda hoax about the Pentagon biolabs in Ukraine. It is about power and Putin’s insecurity. After horrendous crimes committed by his regime in Chechnya, Dagestan, Georgia, Syria and now Ukraine, Putin is a war criminal who cannot quit his position in power. He was declared a war criminal by the US, European Union and most other countries of the world.

I am not sure that Russia is looking for more natural resources or has any economic interests in aggression on Ukraine. Russia, stretched over 11 time zones, has abundant with natural resources that it cannot develop as the new class of Russian entrepreneurs became a rent-seeking private bureaucracy. The source of bureaucratisation of private enterprise in Russia is the same as everywhere else: the destruction of the profit motive by government regulations and taxation. Current economic and political developments in Russia are taking the path, towards even more government control and intervention, coupled with the totalitarian political regime of Russian dictator, ex-KGB officer Vladimir Putin.

Putin and nationalist socialists surrounding his dictatorship are fuelling aggressive policies towards the “near abroad”, as well as supporting various totalitarian regimes, including Iran, North Korea, Venezuela and others. Make no mistake, he will not stop with Ukraine; he is a menace to the whole world with 15,000 nuclear warheads. Today Ukrainians are on the frontline to fight this modern-day fascist dictator, and they are fighting for all of us.

The Russian economy and society are already paying a high toll for Putin’s war. The UK put a 35% tax on imports from Russia. A ban on the export of goods used by Russian firms is introduced by the EU, US, UK, Canada, Japan and many others. It includes dual-use goods – items with both a civilian and military purpose – including chemicals and lasers.

The G7 – an organisation of the seven richest nations – is stripping Russia of its ‘most favoured nation’ status, which means a loss of trade benefits.

The UK, EU and US have imposed sanctions on hundreds of members of the Russian regime, and wealthy business leaders known as oligarchs, who are considered close to the Kremlin. All Russian flights have been banned from US, UK, EU and Canadian airspace. Private jets chartered by Russians are also banned.

The UK has put travel bans and asset freezes on former Russian president Dmitry Medvedev and defence minister Sergei Shoigu. Along with the EU and US, it has also imposed sanctions on 386 members of the Russian parliament.

Assets belonging to Russian President Vladimir Putin and his foreign minister Sergei Lavrov are being frozen in the US, EU, UK and Canada.

The US is banning all Russian oil and gas imports and the EU and UK will phase out Russian oil by the end of 2022. President Biden said it targets “the main artery of Russia’s economy”.

The EU, which gets a quarter of its oil and 40% of its gas from Russia, says it will switch to alternative supplies and make Europe independent from Russian energy well before 2030. Germany has put on hold permission for the Nord Stream 2 gas pipeline from Russia to open.

Western countries have frozen the assets of Russia’s central bank, to stop it using its $630bn of foreign currency reserves. Other measures against Putin’s Russia include suspension from the Bank for International Settlements – ‘the central bank for central banks’ – to stop it using its services. The US, EU and UK have banned people and businesses from dealings with it. Some Russian banks are being removed from the international financial messaging system Swift, which is used to transfer money across borders. This will delay payments Russia is paid for energy exports[1].

The impact of Russia’s invasion in Ukraine has already undermined not just economies of those nations but also the global economy. The entire global economy will feel the effects of slower growth and faster inflation because of Putin’s war. Russia and Ukraine are major commodities producers, and disruptions have already caused world prices to soar, especially for oil and natural gas. Food costs have increased as well, with wheat, for which Ukraine and Russia make up 30% of global exports, reaching its record.

For sub-Saharan countries still recovering from the pandemic, Putin’s war threatens that progress. Many countries in the region are particularly vulnerable to the war’s effects, specifically because of higher energy and food prices, reduced tourism, and potential difficulty accessing international capital markets. “The conflict comes when most countries have minimal policy space to counter the effects of the shock. This is likely to intensify socio-economic pressures, public debt vulnerability, and scarring from the pandemic that was already confronting millions of households and businesses. Record wheat prices are particularly concerning for a region that imports around 85% of its supplies, one-third of which comes from Russia or Ukraine.”[2]

Almost 4,000 academics, students, and graduates of my alma mater, the Moscow State University, Russia’s oldest university, have signed a letter saying they “categorically condemn the war that our country unleashed in Ukraine… We express our support to the people of Ukraine and categorically condemn the war that Russia unleashed against the Ukrainians.”