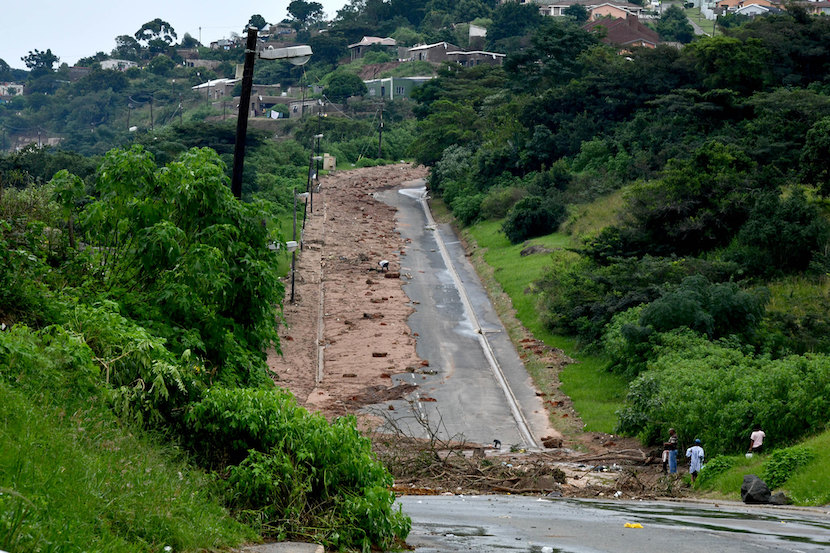 It shouldn’t take a geotechnical engineer to map out the demographic risks of having your home demolished by flooding in the eThekwini region. The real solution to this predictable perennial tragedy is social and political, MacRobert concludes. He takes us on a searching, informative tour of the subsoil types in KwaZulu-Natal, where they are located and how they behave. When the 20% average of mean annual rainfall for the region is exceeded (it reached 30% over four days), the results are predictably catastrophic. Yet again, we have an expert telling us that death and destruction were avoidable. The lack of services and the washing away of any noticeable competence, plus the avarice of the eThekwini Municipality are notorious. Just take my comfortably situated cousin in Kloof. His neighbour’s yard and house were flooded, so they cast around for a pump, without luck. A visit to the local fire brigade to seek help proved fruitless. They were closed. Tiny but eloquent incident. Story courtesy of The Conversation. – Chris Bateman

How geology put a South African city at risk of landslides

Some articles have suggested the catastrophes in Durban and the greater eThekwini region of South Africa following recent floods are due to climate change and maladministration. While these factors play a role, the fact that landslides occurred comes as no surprise, considering the geology of the area.

eThekwini is a coastal metropolis characterised by hilly terrain dissected by several major rivers such as the Umgeni, Mlazi and Mbokodweni. The region is subtropical, but recent rains were unprecedented relative to recent records and resulted in multiple landslides.

Some of the earliest studies of landslides in this region date to the 1930s. Mitigation measures including zoning regulations are in place for some parts of the region. But knowledge of the geotechnical risks of the area has not prevented another tragic disaster.

As a geotechnical engineer I study the effects of water on the stability of sloping ground. Many natural slopes are in a delicate state of equilibrium: the downward movement of the inclined soil is just balanced by the resisting strength between the soil grains.

When water is introduced, the water pressure pushes soil particles apart, reducing this strength. Also some soils, such as clays, are more slippery and present an even greater landslide risk. In eThekwini, sloping ground, water and clay combined to leave devastation in their wake.

Ground adjacent to the sea from Durban to Mtunzini (a coastal town 140 km north of Durban) is almost exclusively made up of ancient red sand dunes termed the Berea formation. South of the Durban harbour these sands form a ridge called the Bluff and north of the harbour they form the Berea Ridge. In some places these sand dunes are extremely steep.

The sands of the Berea formation were subject to intense investigation in the late 1950s following landslides along the Bluff. The strength of the Berea sands was not uncharacteristic for sandy material. But the Bluff slopes were steeper than would be expected based on the soil’s strength. The only reason the slopes hadn’t collapsed was that plant growth was reinforcing the soil.

The investigation showed the slopes’ stability was not significantly affected by rainfall. That makes sense as these slopes have been battered by storms over geological time. But concentrated flows from poorly controlled flood water or broken water pipes were found to be catastrophic.

The reason is that as the Berea sands have little to no clayey stickiness, or plasticity, they are extremely prone to erosion. When large torrents of water flow over the sands they simply erode to form gulleys. The video below clearly demonstrates the power of water over these loose sands.

These shales were formed from thin layers of clay and silt deposited in slow-moving water bodies during the geological past. When exposed at the surface, the shales break down or weather. Depending on their mineral content, some layers weather to very slippery clay.

It only takes a small increase in water pressures along these layers to trigger a landslide. The shales are not very permeable, so it can take a long time for the water pressure to become high enough to cause instability. It could eventually happen as a result of seepage from leaking pipes or long rainy seasons.

The residential area of Clare Estate, which witnessed landslides during the recent flooding, is built on these shales. Tragically, this is not the first time landslides have occurred here. Slides in these shales have been investigated since the 1930s.

Another part of the geology of eThekwini are the sandstones of the Natal group. These sandstones weather into a sandy material but there are also layers containing clay. While water can easily flow into the sandy layers, it can become trapped by the clayey layers.

During heavy rainfall events this can cause excess water pressure, liquefying the sand so it runs like water. A review of landslides in the eThekwini region between 1971 and 1991 showed that when short rainfall events exceeded 20% of mean annual rainfall, landslides could be expected.

During the recent floods, over 300 mm fell over four days (9–11 April 2022), equating to 30% of mean annual rainfall. This clearly exceeded the landslide threshold. The situation was made worse by the storms coming at the end of the rainy season when the ground was already saturated.

Sadly, the houses of the KwaNdengezi settlement near Durban were no match for the forces of nature unleashed by the deluge of water over those three days. Some houses were swept away as the ground gave way and others were simply too close to flood lines to withstand the surging water.

Landslides in the eThekwini region should come as no surprise. We know which areas are at risk and why. Zoning and early warning systems would seem to be logical measures to take.

The eThekwini municipality does have by-laws in place for some risky areas like the Bluff and it does publish maps highlighting areas of risk. The recent landslides suggest more work is required to fully zone the region and to enforce by-laws.

Landslide mitigation is always difficult, though. Landslide zoning has met with fierce political resistance in Japan and the US as land devalues if marked as risky. Landslide prediction systems are also costly to implement and can warn residents too late.

Anywhere in the world, the technical problems surrounding landslide mitigation are often the least challenging to solve. The real problems typically lie with social and political issues which require considerable finesse and thought to resolve.