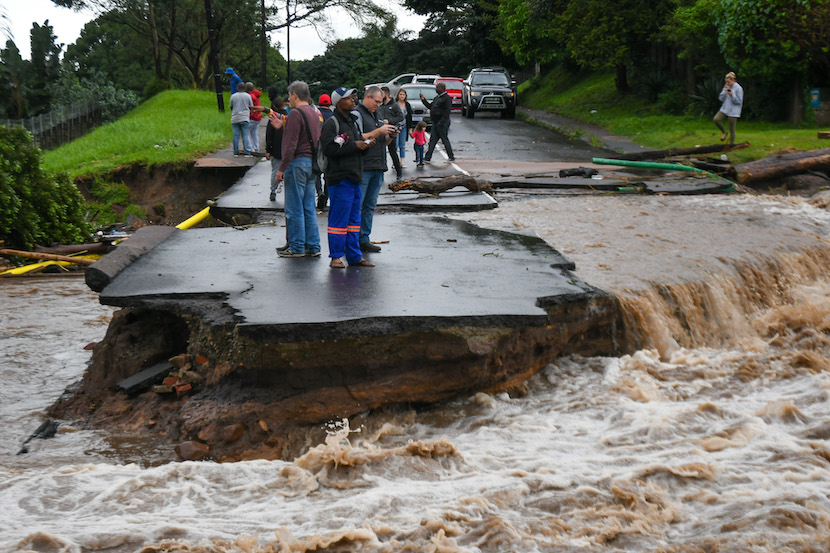 R1bn has been put aside by the Human Settlements Department to assist KwaZulu-Natal residents whose homes have been damaged by the floods. KwaZulu-Natal Premier Sihle Zikalala has promised that government officials will not take advantage of disaster relief funds and the government said it was looking at bringing in an independent agency to manage the funds in a bid to avoid corruption. Most South Africans, however, believe ANC cadres are again salivating at the prospect of another tender windfall. And they have reason to be sceptical after Parliament’s Ethics Committee decided that former Health Minister Zweli Mkhize who stands accused of channelling PPE tenders to family members, was not in breach of its code. Apparently, it is not nepotism and corruption when money is deposited in your son’s account when he is a married adult. William Saunderson-Mayer writes in this article in Politicsweb about the permanent state of disaster that KZN is in and compares the response to the tropical storm Domoina in the ‘80s to last week’s government response in the flooded areas of KZN. He shares the scepticism of many South Africans that the tenders awarded won’t be another feeding trough for corrupt ANC cadres. My vote would be for Gift of the Givers to distribute KZN relief funds, which would ensure the money actually gets to the people who need it. – Linda van Tilburg

KZN: What a disaster

KwaZulu-Natal has declared a provincial state of disaster to try to cope with the devastating floods of the past week.

This is normally a temporary mechanism of which the primary purpose is to facilitate speedy national government assistance to hard-pressed provincial and local authorities. It also triggers the release of emergency funds from the National Treasury.

But in KZN’s case, they might as well make it permanent. This is a province that has been on its knees for some time and it ain’t getting up any time soon. After all, KZN hasn’t even staunched the bloodied nose it suffered nine months ago. That’s when one wing of the African National Congress government – the Radical Economic Transformation followers of former president Jacob Zuma – tried to bury the other, the so-called reformists led by President Cyril Ramaphosa.

KZN hasn’t even properly tallied the body blows it suffered then. The official estimates for the insurrection were 45,000 businesses affected, R50bn in economic damage, 129,000 jobs lost, and 354 killed. These estimates are probably on the low side. For example, the number of people who were killed in the mayhem doesn’t include the many whose bodies were simply never found and counted.

And the true economic cost is incalculable. There’s been substantially increased emigration of minorities, cancelled investment, and the loss of international confidence in KZN as a safe tourist destination. In at least a dozen small, country towns, all the business infrastructure was destroyed, paradoxically by the very people who worked and shopped in those buildings.

Now the floods. The death toll is over 300 and still rising. Some 6,000 homes have been destroyed and road, water sewage and electrical infrastructure uprooted. As I write this, roaming mobs are opportunistically plundering container depots, stranded trucks, abandoned homes and vulnerable businesses, reportedly unhindered – as was the case during last year’s riots – by the police and army.

What balderdash. Whatever role climate change may or may not have played in the larger scheme of things, it’s nonsense to pin on it responsibility for the plight of KZN. That lies with the ANC government.

First, this was not an unforeseeable bolt from the heavens. The forecasters warned months back that this was likely to be an exceptionally wet summer because of the La Niña weather pattern that occurs every few years. There are also historical precedents for extreme weather in KZN, which a prudent administration would have taken note of.

In 1984, Tropical Storm Domoina wreaked havoc in a swathe from Mozambique, through Swaziland to KZN. Although the current downpour is worse, the scale is nevertheless in the same ballpark. This latest storm – as yet unnamed – dumped 450 mm of rain on Durban in 48 hours. Domoina let loose 615 mm in 24 hours on Swaziland and northern KZN.

But the true difference between those events, 38 years apart, lies in the lack of preparedness on the part of today’s authorities. In 1984, the SA Air Force deployed 25 helicopters to airlift people to safety. In the 2000 Mozambique floods, 17 SAAF helicopters rescued more than 14,000 people.

This time, according to a News24 report, the SA Police Service and the SAAF, combined, have been unable to put a single chopper in the air. The erosion of South Africa’s military means that of the SAAF’s 39 Oryx helicopters, only 17 are serviceable. Durban-based 15 Squadron has not a single helicopter available for search and rescue – they are reportedly primarily used as VIP transport – but two SAAF choppers supposedly have been despatched from Gqeberha to help. The SAPS airwing has only one serviceable helicopter but “the pilot on duty has been booked off sick”.

Second, throughout the province, local government is also in a state of disaster and unable to do its job. The scale of the KZN impairment can be measured in the flood destruction of homes. Some 4,000 shanties have been destroyed, many because officialdom was too lax to forbid building on the floodplain and against precariously unstable hillsides. Another 2,000 of the homes swept away were so-called RDP houses, shoddily built during the kickback-and-steal bonanza of the government’s Reconstruction and Development Programme of the late 1990s.

In Durban, the eThekwini metro is bloated and inert. It carries a rates and services debt of R17bn, of which R1bn is owed by the national government. Durban is also infamously corrupt. Former mayor Zandile Gumede – along with 21 co-accused – is facing fraud, corruption and money-laundering charges in connection with a R320m municipal tender.

Yet, at the weekend, even as the rain was bucketing down, she won the ANC’s regional leadership contest hands-down, despite the party’s supposed ‘step-aside when accused’ rule.

The ANC-aligned Ahmed Kathrada Foundation has no illusions about the party it supports. It issued a statement calling on the government to ensure that unlike the plundering of Covid-19 emergency relief funds, the KZN disaster funds were not stolen or misused.

Fat chance. The ANC has already announced that its parliamentary constituency offices in KZN would become “hubs for humanitarian support” and appealed for the donation of relief supplies. Watch the trousering by the ANC’s public representatives of anything that the public is dumb enough to leave with them. It’s in KZN where the ANC’s brazen indifference to the law and antipathy towards the Constitution is at its most obvious and most destructive.

On Monday, Zuma’s corruption trial once again failed to take off in the Pietermaritzburg High Court when he successfully blocked the process with another round of delaying legal actions. His lawyers also had some carefully threatening words for the judiciary in a separate Supreme Court of Appeal action. They urged SCA President Mandisa Maya to reconsider the dismissal of his latest corruption prosecution challenges. They warned that last year’s deadly July unrest was “in part, traceable to a perceived erroneous and unjust judicial outcome” that put Zuma briefly in prison for contempt of court. “When such conceived mistakes are committed, the citizens (wrongly) feel entitled to resort to self-help…”

Floods, fires and locusts are devastating but at least they happen relatively rarely. The ANC, alas, is a seemingly unending plague.

I agree with those who are sceptical about the application of the relief fund for KZN. Corruption on all levels are still ongoing in Government and there is not one reason to believe or trust this Communist Government. With the inability to control the influx of illegal foreigners in this country, the normalization of the power grid, the downward trend of the economy, the inability by SAPS to fight crime and the lack of jobs to the people, South Africa has become a “Sewer” in Africa.

How do you change a country’s culture—change it from a capitalist system to a government controlled socialistic society. Here is the playbook, and so far, the socialists appear to be making a lot of progress.

Stealing and corruption must be part of the DNA of many within government and those on our streets. I so wish that we can find a man like John Megafuli to become president of this country.

Will the flood funds be plundered? Oh yes it will. And the corruption will continue long after the KZN floods.