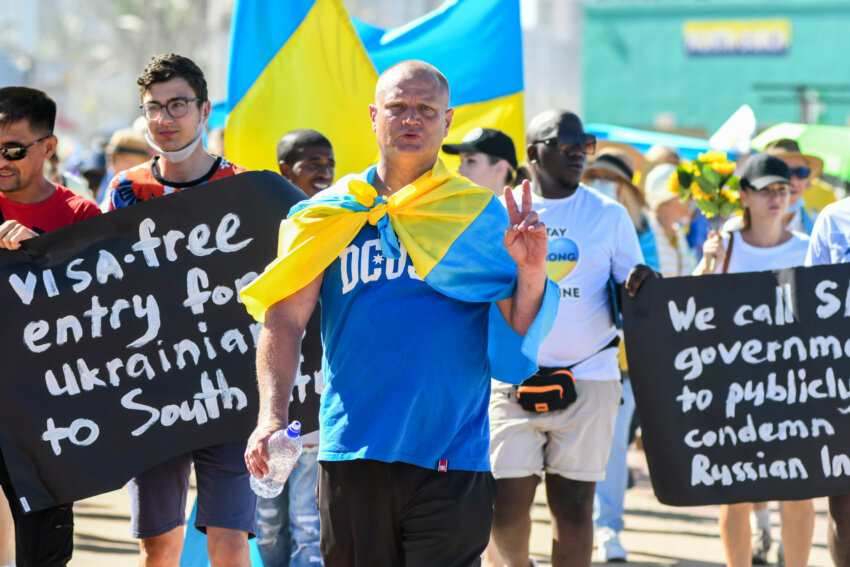 Abravitova explains in her interview with BizNews – despite the efforts of many not to recognise it as such – that there has been a very real war raging in her country for over two months. It’s a war that has killed tens of thousands and displaced millions. As is so often the case in war, civilians bear the brunt of the suffering.

It has been a war on two fronts in a sense: one raging on the battlefield for territory, and another online and on social media platforms. There is information and misinformation. There are agendas … it would be naive to think otherwise. Each side in the information war is firing salvos of blogs, tweets, posts and articles, bombarding readers on the contested battlefield of the mind and public sentiment.

For Russian President Vladimir Putin – who has decimated independent media in Russia – controlling information on the home front, at least, is half the battle won seeing as his troops have not fared quite as well as many expected. But make no mistake, according to Abravitova this is an all-out war and not some special military operation as Putin has characterised it.

Abravitova says: “The war is happening on sovereign territory. We did not invade anyone. Russian troops came to Ukraine and they are killing civilians. They are basically involved in genocide. Many parliaments [around the world] are already recognising the actions of Russia as genocide. That’s something that definitely will touch every African and every South African who has seen the atrocities of genocide. It is happening today. It is happening in the 21st century. We need to call the crime a crime. We need to call a war a war. And we need to stop Russia altogether.”

Ukraine’s ambassador tweeted on 10 April that it has been 45 days since the “brutal attack” on her country and no one in the South African Government would meet with her. The spokesperson for South Africa’s Department of International Relations and Cooperation (Dirco) called this move undiplomatic.

#TalkToMe Since the beginning of russian invasion I did not have any requested meeting with SA government officials… 45 days!!! My people are under brutal attack of russians ..now. @DIRCO_ZA @CyrilRamaphosa @News24 @dailymaverick @SABCNews @eNCA – how ?!- https://t.co/IRehK00PfI pic.twitter.com/twc3JuB4QC

It’s a move that clearly shifted something within the South African Government and Abravitova has been rather busy ever since. Just a day after posting the above tweet, she met with the Director-General of Dirco, Zane Dangor.

“It was very important and crucial. He’s a new appointee at Dirco as DG and it gives us a lot of hope for further very active co-operation and dialogue. In my tweet, I didn’t complain. I’m sorry if you saw it that way. I was appealing to everyone. I am here to talk to people, to say the truth. In my discussions with media, I am not appealing to the government [of South Africa]. I am talking to people through you,” she says.

On 19 April, she also discussed the unfolding humanitarian disaster in Ukraine with Home Affairs Minister Dr Aaron Motsoaledi. Then on 25 April, she met with the ANC’s chairperson on International Relations – Lindiwe Zulu – who is also the country’s social development minister.

Almost six weeks after Ramaphosa spoke to Putin, who praised South Africa’s “balanced approach” to the conflict, he had a telephone conversation with Ukraine’s President Volodymyr Zelenskyy on 21 April. 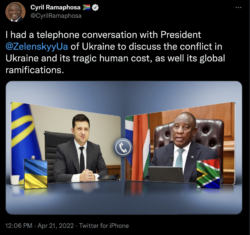 Abravitova says: “We can characterise the call as a very good one and very positive. This was engagement between two presidents [of Ukraine and South Africa] that hasn’t happened since 2003. My president [Zelenskyy] spoke about the resistance of Ukraine towards aggression but was saying we are ready for a diplomatic solution and willing for peace in our land.”

Zelenskyy extended an invitation to Ramaphosa to visit Ukraine once the war is over. But when that could be remains impossible to tell. “Today, it is a very difficult time to predict when such a visit will be safe to travel for the President [Ramaphosa]. From what we know, when the war ends, we will work together with Dirco on the visit. Part of my work now is to prepare substance for our future visits. I’m sure that if and when Ramaphosa visits, there will be a reciprocal visit from the Ukrainian side. We really want to see this happening,” says Abravitova.

Putting politics and politicians aside for a moment, the ambassador had this message for ordinary South Africans as the country prepares to celebrate Freedom Day on 27 April. It’s the day when all South Africans went to the polls in 1994 for the first time exercising their democratic right to choose their future built upon a new foundation of respect for human rights and human dignity.

“I want ordinary South Africans to see what the repercussions will be if Ukraine falls. I want them to understand that we are fighting today not only for our sovereignty and territorial integrity, we are fighting for that which unites South Africans … for freedom, that you are celebrating in a couple of days, and for human rights. If we fail, the whole world will have failed to uphold these values.”