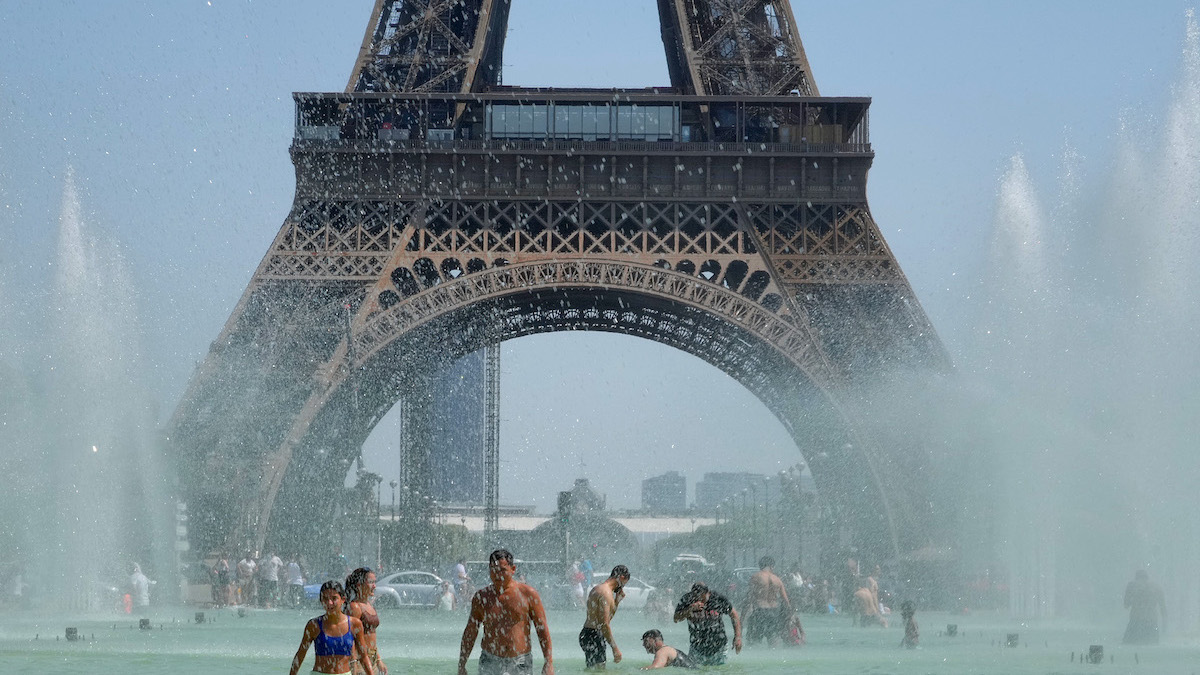 Engineer Andrew Kenny reports that the UK Met Office claimed that this summer in Europe saw record weather extremes, record low rainfall, record high rainfall, a record number of hot days, and so on. But Kenny says the official data, including those of the CET, showed nothing of the kind. This summer had broken no records, except for a few hot days. There is no scientific basis for the claim that rising CO2 will change the climate in a dangerous way. CO2 is a weak greenhouse gas. Above 150 parts per million (ppm) it has never been seen to have any effect on global temperatures and, as far as we can measure, CO2 has never been below 150 ppm in the life of our planet. So what’s all the fuss about? Read on to hear another point of view. – Sandra Laurence

While global temperatures for June and July of this year show no sign of global warming, the mainstream media and some official meteorological bodies are screaming that the recent heat waves in parts of Europe and North America are proof of global warming. There were even claims that recently we had ‘the hottest days ever‘. The data show that none of this is true.

The latest issue of The Economist (July 23 to 29, red cover with “ESG” in big letters) is filled with hysterical warnings about the heat waves in parts of the UK and Europe: ‘Heatwaves: a harbinger’; ‘A rising share of people are dangerously exposed to high temperatures’; ‘A warning of worse to come’. The BBC, which is more biased than the SABC and which spreads fake news about climate change, was even worse. The British Met Office made alarmist claims that its own data does not support. Our mainstream media naturally repeated all of this in their usual uncritical way. All of them are promoting the belief that rising CO2 is causing dangerous climate change – which they used to call ‘global warming’.

The best way of measuring global temperatures is by satellite, which has been done since 1979. The satellites showed that June 2022 was the coldest June in the last 22 years. (See: Roy Spencer, PhD (drroyspencer.com)) July’s global temperature was slightly higher but still lower than many months before. The heat waves were not part of a pattern of global warming.

The high temperatures cited by the BBC and The Economist are from land-based instruments (thermometers), which unfortunately are unreliable. Thermometer measurements of temperature only began in 1659, in the Little Ice Age, with the Central England Temperature (CET) record. The ‘hottest day ever’ means the hottest day since instrument measurement began, 363 years ago, in the middle of the coldest weather in the last 10,000 years.

The land thermometers are unevenly spread over the Earth’s surface and are prone to various errors and to manipulation. Probably the worst error is the Urban Heat Island (UHI) effect. If a town or city grows in the location of a thermometer, it will raise its temperatures artificially. The more the urban area grows and the higher its population becomes, the more its temperatures will rise. Without any global warming at all, you would still see urban temperatures rising. This happens because man changes the surface, for example with tar roads, making it absorb and radiate more heat, and because man heats the air with engines, heaters, furnaces, fridges and air conditioning. (A fridge in a closed room will raise the temperature of the room; the heat it emits to the room is greater than the heat it rejects from its interior. Air conditioning sucks heat out of the room and rejects it to the outside world; if you have a window open, your air conditioner will try to warm the whole world.)

Some of these temperatures briefly rose to just above 40 degrees C, but only for a few days. I happened to be in England for the 1976 heat wave. According to CET, for the days 1 June to 21 July, the average temperatures were 23.9 degrees C in 1976 and 21.6 in 2022. The highest temperatures were 35.9 in 1976 and 40.3 in 2022. 1976 had eight days above 30, 2022 had two. Even if the recent high temperatures are not because of the UHI, I should say that the 1976 heat was worse – and that was 46 years ago when global temperatures had been dropping (leading to the scare that another ice age was beginning and we’d all freeze). By the way, I didn’t suffer at all personally in the 1976 heat wave. It was warm all right, sometimes unpleasantly so, but never debilitating.

The recent heat waves were only in parts of Europe. In adjacent parts there were cold waves. Unusual heat went alongside unusual cold. I saw nothing of this in the mainstream media. They constantly harp on the health hazards of the heat and hardly ever mention those of the cold, which are much worse. Deaths of old people are far more frequent in a cold winter than a hot summer. The mechanisms for these hot spots and cold spots are complex, perhaps beyond our complete understanding and certainly beyond our powers of long term prediction.

As usual, The Economist and others warned that global warming would be more dangerous in poor countries, especially in Africa, than in rich countries. That is not true. Climate change, which I say again is entirely natural, has the biggest effect in high latitudes. It has almost no effect at the equator, where many poor people live. Because Homo Sapiens evolved (about 200 thousand years ago) somewhere in northern Kenya, close to the equator, we are made for warm weather and can cope with it naturally. We are not made for cold weather, and suffer because of it.

There is no scientific basis for the claim that rising CO2 will change the climate in a dangerous way. CO2 is a weak greenhouse gas. Above 150 parts per million (ppm) it has never been seen to have any effect on global temperatures and, as far as we can measure, CO2 has never been below 150 ppm in the life of our planet. Civilisation began about 10,000 years ago, and over that period global temperatures have risen and fallen in an irregular pattern, while CO2 remained steady at about 280 ppm until about 1850, when mankind caused it to rise. Over the last 3,000 years, the trend has been downward. Our present age is cooler than most of the pre-industrial age, while CO2 is higher than all the pre-industrial age. The coldest period of all was the Little Ice Age, from about 1300 to 1850 AD. The previous warm period was the Mediaeval Warm Period (MWP), about 900 to 1200 AD, when CO2 was lower than now, about 280 ppm. The present warm age began about 100 years ago. If we have a repeat of the MWP, our warming will last another 200 years with a slight rise in temperatures.

The fact that climate change is natural is no reason not to be concerned about it. Natural climate change has caused disaster in the past. The brutal weather of the Little Ice Age caused violent weather extremes, droughts, floods, storms, crop failures and famines. It might have been a major cause of the terrible witch-burning frenzy of that age and might have prompted some of its horrible wars and revolutions.

We should always be prepared for natural disaster. But we should not be worried about manmade climate change. And we should be grateful that the weather of the last century or so has been benign despite a few hot days in summer, which sound rather nice to me right now in a chilly Cape Town.

The views of the writer are not necessarily those of the Daily Friend or the IRR.