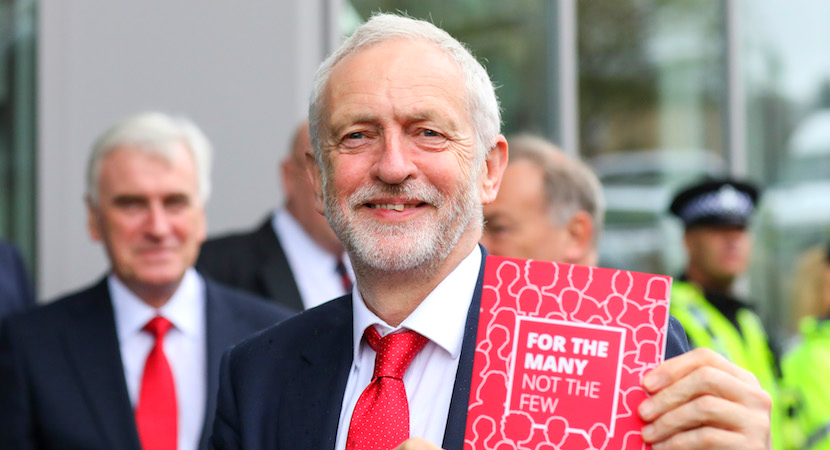 EDINBURGH: If you still believe pollsters, then you should know that you can no longer take it for granted that Conservative Party leader Theresa May will enjoy a clear majority in the June national elections. Labour under Jeremy Corbyn has been gaining ground, with promises designed to shake up the economy and rewrite foreign policy. Analysts are trying to understand what Britain will be like if Corbyn becomes prime minister. Labour has made noises to increase tax on higher income earners as well as create additional taxes to penalise those who opt for private health insurance and private schools. Corporate tax could rise, too. University fees will be scrapped and a range of businesses, from the Royal Mail to the railways, could be nationalised. Some of Labour’s policies are woolly, like how it will deal with Brexit negotiations and spending on defence. – Jackie Cameron

(Bloomberg) — With less than two weeks to go to the U.K. general election, polls indicate the opposition Labour Party is creeping up on the Conservatives. While incumbent Prime Minister Theresa May is still the clear favorite, an upset would bring to power a government that wants to nationalize industries and re-write decades of foreign policy.

Corbyn’s manifesto pledges an income tax increase for the top 5 percent of earners — those with an income of more than 80,000 pounds ($103,000) — and tax on private health insurance as part of a plan to inject a further 6 billion pounds a year into the National Health Service. Corporations would also pay “a little more:” 26 percent by 2020, up from 19 percent now.

Raising the top rate of income tax risks “diminishing the U.K.’s appeal,” according to Nina Skero, at the Centre for Economics and Business Research. Increasing corporation tax is a popular measure with the public amid anger at corporate tax avoidance. The Institute for Fiscal Studies said neither of the main parties were being honest about how much tax rates would have to rise, and said there is “no way” Labour spending pledges could all be paid for by top earners.

IFS say Corbyn will need to raise taxes even further. "A state of the size of the Labour party would likely require broad based increases"

Corbyn has found it difficult to formulate a Brexit strategy knowing his party is more divided than the Tories over the merits of leaving the EU. Labour’s manifesto “accepts” the result of the referendum and Corbyn says that as the matter is “settled,” there won’t be another vote.

The party promises to scrap May’s negotiating strategy and prioritize membership of the single market and customs union in the talks with the EU. That would be hard to achieve given the party has also said it would end free movement of labor, which EU officials say the U.K. must keep it if wants to maintain market access.

Labour has also rejected May’s view that “no deal is better than a bad deal” by saying no pact would be the “worst possible” option and that a Labour government would negotiate a transitional accord. Again the EU would have to agree to that, although Corbyn’s proposal to immediately guarantee existing rights for EU citizens living in Britain would generate goodwill.

The folk attacking Corbyn over The Troubles are the same folk whose Brexit threatens to revive them. It's almost like it's pure opportunism.

Labour pledges to scrap university tuition fees, which have been controversial since they were first introduced in 1998. Corbyn pledges “the biggest council building program for at least 30 years” while introducing controls on rent rises to “end insecurity for private renters.” At the same time they will eliminate the budget deficit within five years.

A pledge to get rid of tuition fees was a winning gambit for the Liberal Democrats in 2010, but their failure to deliver once they got into government may make voters more skeptical this time around. It is also expensive; the IFS estimates bringing back maintenance grants and abolishing tuition fees would increase the deficit by about 8 billion pounds a year.

Labour also wants to renationalize Royal Mail and bring railways back into state ownership as the private franchises expire.

Unlike Corbyn, #Tories are not promising huge sums of new public spending because they believe in a strong economy founded on sound money.

Unlike the Conservatives, who have repeated their pledge to cut immigration to the “tens of thousands” throughout the campaign, Corbyn hasn’t set a numerical target. Instead, his manifesto promises “fair rules and reasonable management of migration.” The manifesto also pledges a “crackdown” on companies using migrant workers to suppress wages.

I asked Jeremy Corbyn 5 times if he wanted immigration to go up or down, he would only say he wants "fair immigration" #Ridge

Corbyn, a longtime peace activist who opposed British involvement in wars in Iraq, Afghanistan and Libya, has drawn a link between foreign wars and attacks on British soil. “The blame is with the terrorists but we must be honest about the causes,” he says.

How low can they get? Amber Rudd says:" vote Corbyn, get more terrorism." And if we vote May, we wont? Do you promise? No shame Tories.

The Labour leader has promised to carry out a strategic defense review, replace Trident nuclear missiles and maintain spending on the armed forces above the NATO benchmark of 2 percent of GDP.

Nothing is straightforward on defense for Labour. While the party supports the renewal of Britain’s nuclear weapons, Corbyn and his inner circle don’t.

Corbyn refusing to answer on Trident, how can he maintain a coherent defense govt when he doesn't support his manifesto? #BBCelection