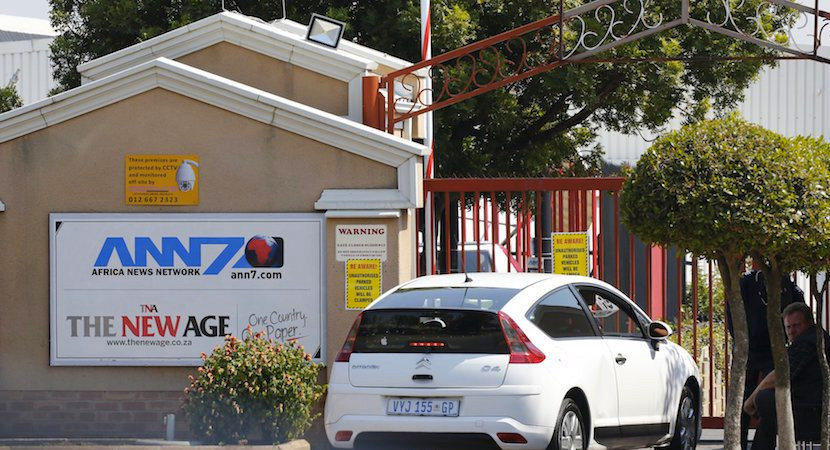 The Afrikaner will continue to influence the future of this country for a very long time to come – because they are made of strong stuff (whether in service of good or evil) – and we’re blessed with some of the best torchbearers of truth around, in spite of prevailing xenophobia. So it is with recently-retired editor of Die Burger newspaper, Bun Booyens, whose media colleague Ed Herbst does us a favour in sharing his Afrikaans newspaper column, written virtually on the eve of Zuma’s cabinet reshuffle. If you haven’t yet witnessed the insane, near-Nazi-like propaganda that passes for news and analysis on the Gupta-linked ANN7 TV channel, let Booyens’ word-skills paint a graphic picture for you. Herbst sets the scene by sharing some telling Pravin Gordhan quotes about the shadowy fake news world that the Guptas and their Zuptoids have created to keep their gravy train rolling. When you read Herbst’s ensuing translation of Booyen’s column, Gordhan’s observations gain even more gravitas – as if that were needed by now. Any journalist who’s even vaguely conscious of the pillars upon which their profession is based, must surely agree; ANN7 TV is completely intolerant of different views or beliefs. It is pure hogwash designed with a nefarious snouting agenda in mind. Either that, or it runs on pure political zealotry that almost by definition, springs not out of faith, but doubt. – Chris Bateman

What stokes the unhappiness is the shabby, unprofessional, cowboy type of journalism that makes a person like me, who’s been in the industry since the 1970s, despair. – Moegsien Williams City Press 11/8/2015

Pravin Gordhan has recently publicly criticised the Gupta media outlets, the New Age newspaper and the ANN7 television channel for their routine ‘cowboy type’ journalism – to quote the editor of those media outlets, the ‘despairing’ Moegsien Williams.

“Why must we constantly deal with people (the Guptas) who are never seen in the public domain – never – but they mastermind all these attacks, make false accusations, pay somebody called Bell Pottinger – you know them?”

“PR firms are hired, millions of rands are spent – to do what? To malign democratic institutions of South Africa. Why don’t they come out, face to face? Let’s have a debate, face to face.”

So how justified is Gordhan’s criticism?

I only watched ANN7 once because I found it to be a very dispiriting experience. It was on the day that Thuli Madonsela released her report on the Nkandla scam. New Age editor, Moegsien Williams, the man who slammed local media houses for their ‘overreliance’ on opposition parties as a source of news, continually assured viewers during a panel discussion that the Nkandla scandal would not adversely affect the ANC in any way and that President Jacob Zuma would go from strength to strength.

Someone who did watch an ANN7 bulletin, on 30 March this year when rumours of a cabinet reshuffle were reaching a crescendo, was the recently-retired editor of Die Burger, Bun Booyens and he also found it a dispiriting experience.

I have translated his article in Die Burger of 6 April and you can decide for yourself whether the criticism by Gordhan was justified or not.

Ever wondered to what level Jacob Zuma will go to cling to the presidency?

Just watch a bulletin or discussion panel on ANN7, the Guptas TV news channel, for 10 or 15 minutes.

Last Thursday I switched over to ANN7 since, if Pravin Gordhan was to be fired (or if Number One did decide to surrender after all), we would probably have heard it first on ANN7.

In the studio a panel of four or five analysts were chatting – difficult to count since almost the entire screen was covered in analysing comments under the theme ‘Cabinet Reshuffle’ for most of the time.

Only three things were being analysed on that night: Cyril Ramaphosa, the SA Communist Party and Pravin Gordhan.

‘Why is the SACP ignoring their taint?’ read the banner at the top of the screen. In the centre was a photo of Cyril: ‘Deputy President’s role in Marikana massacre is still under investigation as EFF laid charges against him’. (Well, at least they were now calling it a ‘massacre’ and not an ‘incident’.)

Right at the bottom was a ‘Breaking News’ banner with this fresh news flash from the ANC Youth League: ‘SACP has not supported free education, land reform issues.’

A photo of Blade Nzimande replaced that of Cyril’s: ‘Community trust started by SACP boss allegedly received funding from SETAs’ read the banner. And then, right at the bottom: ‘SACP has undermined the constitutional rights of Brian Molefe,’ followed by ‘SACP has breached the confidence of the head of state’ and ‘Can SACP be trusted with state secrets?’

Pravin then got his turn under the heading ‘Controversies around Gordhan’. And the ANN7’s list was long: ‘Seen to have targeted SAA’s Dudu Myeni’. ‘Critics saw his anti-SAA stance as a ploy to control SAA contracts’. ‘Targeted Eskom over alleged link to Guptas’.

ANN7 was not done with Pravin: ‘Targeted NPA and Hawks after he was charged under PFMA act’ (next to a nice head and shoulders of Shaun Abrahams, jawbone firmly jutting forward).

And then Pravin’s greatest misdeed: ‘Played victim and suggested charges against him political and conspiracy against economy’.

It continued. The Progressive Professionals Forum’s Mzwanele Manyi said: ‘The economy has underperformed under Minister Gordhan.’ (And I thought that this was Ebrahim Patel’s portfolio?)

Also: ‘Treasury has failed to manage irregular expenditure targets.’ (Such as Nkandla perhaps?) ‘Treasury is not concerned with black business.’

And Gordhan did of all of these things to benefit white monopoly capital, of course.

I switched over to the BBC. It showed images of how the sacked president of South Korea, Park Geun-hye, was being arrested for corruption.