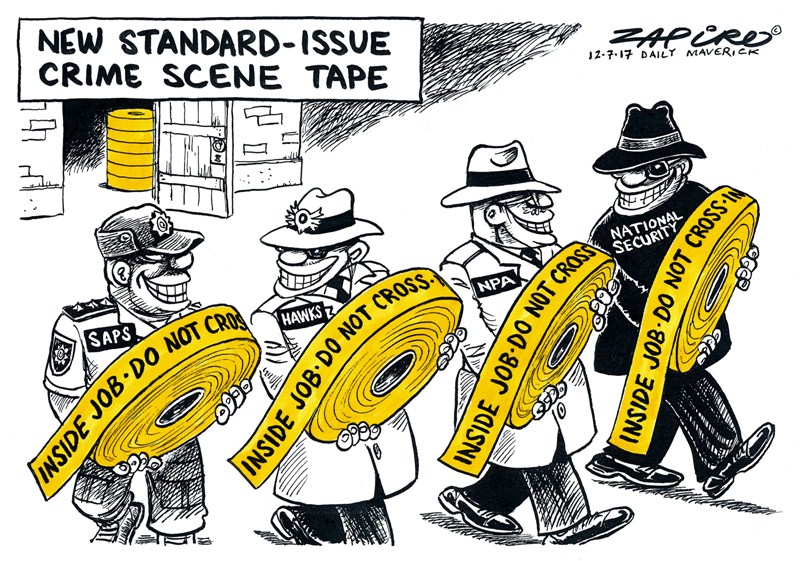 JOHANNESBURG — What is supposed to be South Africa’s elite crime-busting unit, the Hawks, is in disarray after years of Zuptoid interference. As Paul Hoffman, a senior counsel and the driving force behind the Institute for Accountability in SA eloquently explains in the piece below, the Hawks have been completely hollowed out and may never recover. Further to this, the Hawks’ independence is also continuously under the spotlight, leaving questions over whether the corrupt in SA society will ever be forced to face up to the consequences of their actions. – Gareth van Zyl

A useful and succinct summary of a Sunday Times report concerning the state of the Hawks, our elite anti-corruption entity, has been published by Legalbrief:

Newly-appointed Hawks commander, Lieutenant-General Godfrey Lebeya, is on a massive recruitment drive to draw back hundreds of officers to tackle corruption and organised crime investigations more effectively, says a Sunday Times report. ‘From 2015, we lost no less than 104 officers who were highly experienced in financial investigations. There are 229 positions which have been advertised internally, which we want filled by competent officers who are knowledgeable and experienced in investigations into state capture,’ said Lebeya. The state capture investigations that Lebeya wants undertaken include not only those being aired in the Zondo commission of inquiry, but also those that are off the public radar, especially ones that involve the irregular awarding of municipal tenders. Part of Lebeya’s turnaround strategy for the Hawks is to create specialised task teams headed and staffed by officers who were either purged, sidelined or forced into retirement during the tenure of former Hawks head Mthandazo Berning Ntlemeza. Major-General Senaba Mosipi, who was among them, will head the teams conducting various state capture investigations. Already a group of hand-picked officers have been despatched by Lebeya to KZN to investigate several municipalities.”

The significance of the year 2015 in the report is that it is the year in which General Berning Ntlemeza was appointed as the head of the Hawks after his predecessor, General Anwa Dramat was forced out of office illegally and unconstitutionally. On Ntlemeza’s watch, the Hawks anti-corruption capacity was destroyed.

While it is encouraging that the new Hawks head, General Lebeya, is concerned to create and engage specialised skills and to recruit trained personnel who have the necessary expertise and experience, the symptomatic treatments for the ailments in the Hawks are not going to be sufficient to restore what the law requires. The Constitutional Court has set the criteria for the anti-corruption machinery of state. It demands, in binding fashion, a unit that is adequately independent to effectively and efficiently prevent, combat and investigate corruption of all kinds. Independence, proper guaranteed resourcing and security of tenure are conspicuously absent in the Hawks.

The current fundamental problem in SA is the high incidence of grand corruption or kleptocracy as it is sometimes called. Poverty, inequality and joblessness are all seriously exacerbated by grand corruption when thieves steal from ordinary folk via pillaging of the public purse. The attempt to capture the state executed by operatives within the ANC and the business community, exemplified by the Zuma and Gupta families, (but by no means exclusively them) is the responsibility of the Hawks to counter, crush and investigate with a view to securing convictions, punishment and the recovery of the stolen loot.

The Hawks have not done so in any way, shape or form. Not since they were established, not while its staff members, who were hounded out of office by Ntlemeza, were in its employ and not since the promising appointment of General Lebeya.

The General candidly confessed upon his appointment that something is wrong with the Hawks and that he intends to investigate and address this problem.

A good starting point is to establish why so many Hawks have flown the coop. The answer, at least in part, is that any willingness in their ranks to investigate corruption in high places has proved to be career limiting.

The best example of this sad phenomenon is the fate of Anwa Dramat, the first Head of the Hawks. He was so emboldened by the decision of the Constitutional Court in November 2014, better defining his powers in relation to combating corruption, that he requested police leadership to make the dockets relating to the irregular procurement of improvements to Nkandla available to him so that the Hawks could investigate possible theft, fraud, corruption and contraventions of procurement regulations.

Dramat did not receive the dockets, which were opened after complaints by Accountability Now in December 2013 and followed up with further complaints in March 2014 by the EFF and the DA. Instead he was suspended, and, fearing for his life and the safety of his family, he opted for a golden handshake and a R60,000 per month pension instead.

All the tea in China could not be used to persuade Dramat to return. Yet the Court has laid down that the leadership of the Hawks should be free of political interference and influence. Litigation assailing the legality of the suspension had to be abandoned after Dramat understandably buckled under the pressure exerted on him by the then Minister of Police Nathi Nhleko.

Read also: Paul Hoffman on lessons learnt from the demise of the Scorpions

Those whom Lebeya is currently attempting to recruit will not have forgotten the trauma of the events surrounding the professional demise of Dramat and others in the Hawks such as Shadrack Sibiya and Johan Booysen. Their recruitment under the current operational and structural environment of the Hawks will be difficult if not impossible. Indeed, any personnel who value their independence and security of tenure of office are going to think twice about staying in the Hawks or re-joining the supposedly elite corruption busters.

Canny observers will have noted that, ignoring the efforts of the courts and of parliament to create an adequate substitute for the Scorpions, the executive has created a hotch-potch crew called the “Anti-Corruption Task Team” to deal with corruption involving more than R5 million. Where does that leave those Hawks who are not on the ACTT? Perhaps chasing cops who ask for cool drink money and other petty forms of corruption?

The ACTT is both unconstitutional and illegal. It should be closed down without any delay or any ceremony. The executive should play no role in corruption busting.

As far as the fight against state capture is concerned, the Hawks lack the operational and structural independence necessary to succeed in this difficult task. The Hawks should be left to deal with all the priority crimes in their inboxes at present and the task of dealing with serious corruption should be the mandate of a new Chapter Nine institution, the Integrity Commission.

This standing commission, like the SAHRC, the Public Protector and the Auditor General will have constitutionally guaranteed independence and will be tasked with preventing, combatting, investigating and prosecuting serious corruption. Petty corruption can be left to the Hawks and the SAPS. In this way the gutting of existing institutions by the Zuma administration will be neatly side-stepped, those responsible for state capture will swiftly be brought to justice and the pernicious culture of impunity for the well-connected will end. Loot will be recovered too.

The legislation needed to establish the Integrity Commission has already been prepared and has been considered by the Constitutional Reform Committee of the National Assembly. The missing ingredient at this stage is the political will to act decisively against the corrupt with connections among the powerful. Mustering the political will to deal decisively with the issue is the primary task at hand. If the ANC-led alliance is unable to do so, the electorate of SA should vote for those political formations which do support the creation of the commission.