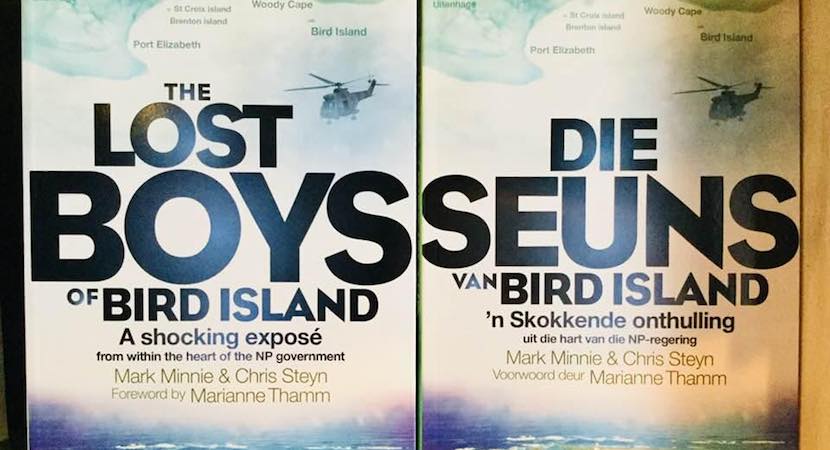 EDINBURGH — Seasoned investigative journalist Chris Steyn has come under attack for her book on an apartheid-era paedophile ring involving senior politicians. Her co-author Mark Minnie’s death sparked fear that his murder had been disguised as suicide and that she could be next. In an interview with journalist Marianne Thamm, the book’s editor, Steyn reveals that she believes Mark Minnie killed himself, albeit under pressure. Her investigation is continuing, meanwhile, and she is sharing all leads with a top detective assigned to dust off the cold case and finally get to the bottom of persistent rumours about the group of men who abused and tormented young boys from disadvantaged backgrounds. This interview is published here on BizNews, with the kind permission of the Daily Maverick. – Jackie Cameron

In August 2018, former cop Mark Minnie, co-author of the controversial best-seller, The Lost Boys of Bird Island – about an alleged paedophile ring linked to apartheid-era politicians – shot himself on a friend’s farm outside Port Elizabeth only days before the official launch of the book.

Since then, the Boys of Bird Island cold case has been reopened and is being investigated by Brigadier Sonja Harri, head of the Western Cape Family Violence Unit. Harri, who has over 30 years’ experience, is respected as one of the finest cops in the country.

It was Harri who guided detectives investigating the brutal murder and rape of 17-year-old Anene Booysen in Bredasdorp in 2013, to name one high-profile case in which she acted as an unseen hand.

It is hoped that this new probe into the alleged abuse of under-aged boys by some of the most powerful apartheid figures of the time will unearth the truth about the murky 31-year-old case which has sporadically leaked into the news since the late 1980s.

This followed the apparent suicide in 1987 of two of the implicated men, Port Elizabeth businessman Dave Allen and National Party Minister for Environmental Affairs and Tourism, John Wiley. Former Minister of Defence Magnus Malan died in 2011.

Wiley was found dead in his Noordhoek home a few months after Allen was found dead at Schoenmakerskop in Port Elizabeth with a bullet wound to the head. Minnie had arrested Allen the previous day for possession of pornography and for having sex with minors, as the charge was known colloquially at the time.

PW Botha was South Africa’s then president and it has since been confirmed that Botha personally instructed that the docket Minnie had compiled during the course of investigating the alleged shooting in the anus of one of the boys to be removed from the policeman’s office. Allegations that Malan had participated in trips to the Island with Allen and Wiley were contained in Minnie’s docket, or so he claimed.

That Minnie’s unexpected and shocking suicide on a friend’s farm near Port Elizabeth in August 2018 should prove to be the third in the saga at first prompted many, including the book’s co-author, investigative journalist Chris Steyn, to question whether the former cop had indeed taken his own life voluntarily.

Devastated by the news that Mark Minnie co-author of Lost Boys of Bird Island has been found dead in the Eastern Cape from an apparent suicide….something is amiss

But Steyn says while she has now accepted Minnie did shoot himself, he may have been under pressure from unknown parties to do so.

Since Minnie’s death and the publication of the book, new leads have dropped into Steyn’s inbox, all of which have been passed on to Harri for further investigation.

In his apparent suicide note, Minnie pleaded with Steyn to continue their work.

“The pitiful cries of the lost boys of Bird Island have haunted me for the past 31 years. At last their story is out. Chrissy, don’t give up now. You are almost home. No government officials preventing you from investigating this time round.”

While Lost Boys has become a best-seller in South Africa, it has not escaped criticism, particularly from celebrated investigative journalist Jacques Pauw.

In his review, apart from other criticisms, Pauw also accused Minnie of being “sloppy” and Steyn of failing to disclose her previous marriage to Eeben Barlow, a former Lieutenant in the SADF and founder and chair of Executive Outcomes, a “private military company”.

Steyn offered a detailed rebuttal to Pauw’s review, saying that she had, in fact, declared her previous relationship with Barlow – who had been the head of the Civil Co-Operation Bureau in Europe – “to my publishers and have confirmed it to members of the media who have asked me about it”.

“My link to Barlow was not disclosed in the book as such as it was not relevant because I was accusing the CCB of possible wrongdoing – not covering it up, as Pauw seems to imply,” said Steyn at the time.

She said while she regarded Pauw as “one of our finest investigative journalists. When he speaks, people take him seriously” she had responded to him “seriously” in her reply.

“One thing I know for sure: this book is just the beginning of the story. Mark and I never claimed to have all the answers,” she wrote.

It has been around four months since the release of the book, Minnie’s death, the vehement denials from some, confirmation by former victims who have since come forward, Pauw’s scathing criticism as well as the official reopening of the investigation.

If Steyn had been hoping to live the life of a recluse in the deceptively benign seaside town of Hermanus, The Lost Boys of Bird Island has put paid to that fantasy.

Steyn opted out of mainstream journalism in 1997 having had “enough of seeing people at their worst”. She eventually settled in Hermanus and opened a small second-hand and rare and collectibles book store with a partner.

The walls of the small shop are decorated with exquisite framed Russian and Chinese propaganda posters, a portrait of Chairman Mao and various other political kitsch collectables Minnie had brought from China as gifts for Steyn when the two met again for the first time in 30 years during the writing of the book.

Minnie had been living in China where he had taught English. It was here that the idea for the book had germinated after the case had, as he maintained, “haunted” him for years.

“You see, it is not what is in the book that matters. There is very little in the book. It is what still has to be uncovered and revealed. If the book can be discredited now and I can be discredited, then whatever new evidence emerges can also be discredited… They are fighting to ensure that future revelations will not be believed,” Steyn told Daily Maverick in an exclusive interview.

Steyn retraced her journey to Port Elizabeth to investigate the original Bird Island case, how she had followed up on a tip-off from a National Party “deep throat”, what she uncovered, how the story had originally been watered down at the time and how the “cover-up is continuing”.

Steyn said she has no regrets about stirring up an apparent vipers’ nest, adding, “It is the right thing to do. You don’t question something because it causes you discomfort… This is our last chance.” DM