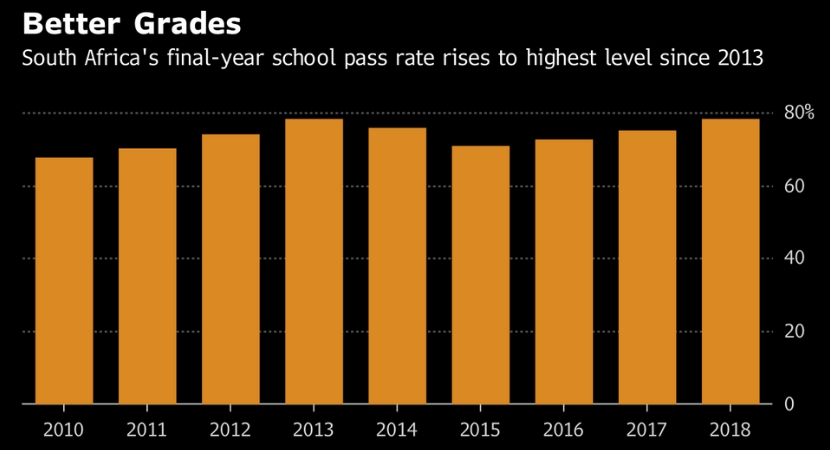 JOHANNESBURG — It’s that time of the year again when the media focus is firmly set on the latest matric results. This year’s numbers indicate a rise in those who passed compared to the previous year. But reading between the lines tells a worrying tale. Less than half of students who passed matric this year have obtained university entrance (and this is after universities have reportedly lowered their entrance requirements). Meanwhile, our educational system is still one in which most learners drop out before even getting to matric, resulting in a lost generation of children and young adults. The only bright spot is the private educational system, but so few children in this country have access to it (as illustrated by the IEB figures in this below story) that it hardly makes a difference to the overall picture. Ultimately, we need a revolution in our public schooling system – but this something that seems unlikely to ever happen in our lifetime… – Gareth van Zyl

Of the approximately 800,800 students sitting for the exams late last year, 78.2 percent passed, Motshekga said Thursday at an event in Midrand, north of Johannesburg. That compares with 75.1 percent the previous year. About 312,700 people are eligible to study at higher-education facilities such as universities, she said.

Almost half of the children who enrolled in the first year of schooling in 2007 didn’t write the full-time tests, the Democratic Alliance, the biggest opposition party, said in an emailed statement.

While the pass rate has been over 70 percent every year since 2011, the government still has some way to go to lift the quality of an education system that was ranked 114th out of 137 countries by the World Economic Forum in 2017, lagging behind the Democratic Republic of Congo and Turkey. The WEF’s Global Competitiveness Index report listed an inadequately educated workforce among key constraints for doing business in the country.

“The headline numbers look good but if you look at the broader data, which includes the number of people that started school, it is probably closer to 40 percent,” said Mike Schussler of economists.co.za. “We’ve also lowered the requirements and are passing on problems to other levels of education, where people are not ready for university.”

South Africa spends about 15 percent of its budget on basic education, more than on any other expenditure item, but poor schooling outcomes continue to constrain an economy in which almost 28 percent of the labor force is unemployed.

“The problem worldwide is that when people finish school, they’re estimated to be semi-skilled but we don’t fully understand that and make an effort to develop those skills through technical colleges and trades,” said Schussler.

Of the 12,372 students at 249 private schools and testing centers who wrote papers set by the Independent Examination Board, 98.9 percent passed, compared with 98.8 percent in 2017. About 90.7 percent achieved a mark high enough to enter university, according to the board.