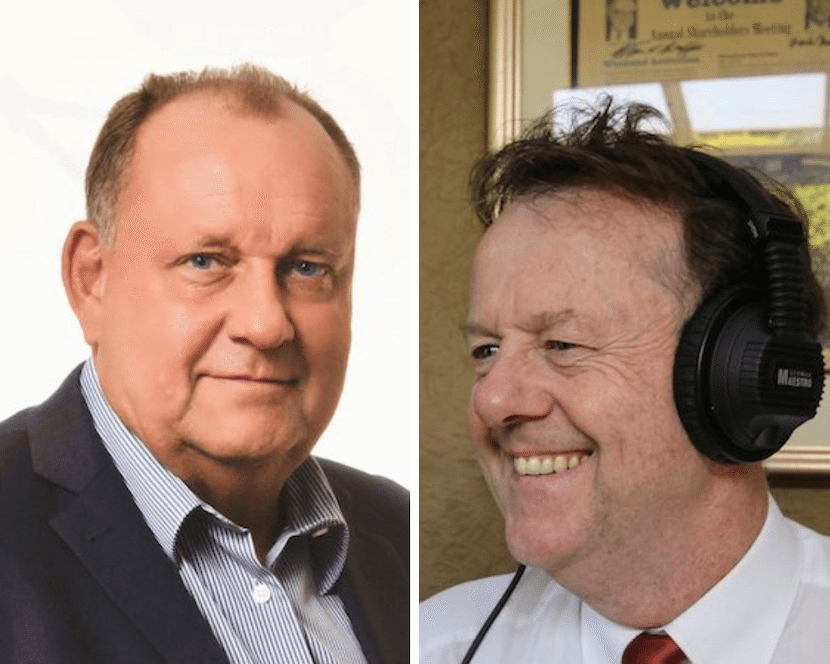 EDINBURGH — Two of South Africa’s most influential financial journalists have taken sides in the debate over whether South Africa is heading for recovery or is likely to keep deteriorating. On the one side: Magnus Heystek, a prominent figure in the South African media. A former editor who runs a business providing investment advice, Heystek has used his inimitable writing talents to educate people about how best to manage their personal finances through books, columns and talks on radio and in roadshows. On the other side of the debate is Alec Hogg, who pioneered business talk radio and digital news in South Africa and is held in high regard for his astute insights on stock market investing. Both have persuasive arguments, with the BizNews community weighing in on this crucial debate. – Jackie Cameron

Magnus Heystek, a former journalist who is now a financial advisor, and Alec Hogg, an award-winning editor and media entrepreneur, have been watching the South African economy for decades.

Magnus, of Brenthurst Wealth Management, is very pessimistic about the country’s future, while Alec – publisher of BizNews –  is optimistic that the nation is back on track with business-savvy Cyril Ramaphosa and his team captaining the ship.

This week, Magnus respectfully differed with Alec for his optimism about South Africa, highlighting reasons why investors should be very worried about returns in the domestic market.  These include:

The piece by Alec Hogg that sparked the letter from Magnus carried the headline: Nobody rings a bell at JSE’s bottom, but this is closest you’ll get to it

Compared against the MSCI Emerging Markets index, South African share prices have never been lower – which Alec sees this as a sign to buy, not to despair. “The JSE is super cheap,” he said, pointing out that the lesson from luminaries like Warren Buffett and Charles Dow has been to buy when others are selling.

The differences of opinion sparked vibrant debate on BizNews, with Magnus Heystek fans lining up to support his view that “if you don’t have the rule of law and respect for property rights, you won’t get investments and you won’t get growth in the stock market”.

The most popular response, with more than a dozen likes and counting, was from Frik de Wet, who said:

I share Magnus’s sentiments exactly. Only a fool will believe the SA economy, and therefore the JSE is about to turn a corner when we have EWC, NHI, Nationalisation of the SARB and an ever increasing and unsustainable debt level as a country.”

Michima‘s point also struck a chord, ratcheting up likes on this comment:

“And as usual, as it seemed the Rand was recovering, Ramaphosa talks of nationalising SARB and the currency immediately lost 1.5%. Does the ANC not have economic advisors, at least ones which weren’t trained in the Soviet Union and still believe East Germany was a success story? I fail to see how SA can ever recover, when the mentality of the governing party, their allies and most of the voters mindset stays the same.”

Coyote called Michima out, though, saying:

“Actually the rand lost ground against the dollar due to USD strength and not because of nationalising the SARB. By nationalising the SARB all it means is that RSA will own its SARB instead of individual investors who cannot set policy anyway as the SARB takes direction from the majority party for the last 24 years. So you are misguided and your panic explanation does not do much too improve our country.”

Colnef and Geoff Smailes also took Heystek’s side, with Colnef arguing: “It has got to the point where too many things have to come right and stay right for a sufficient period of time for me to think the local economy can grow at high levels. However, JSE-listed companies have diversified away from the local economy over the years and shrewd stock-picking could do well despite poor local growth prospects.”

Geoff Smailes said: “Agreed. There can be no happy outcome for SA while the ANC retains so much (communistic and corrupt) influence over our destiny. And now the ANC wants to control (plunder, if possible ?) SARB!”

Adding incisive points on BizNews, as usual, was GavinCame, who also seems to think current prices represent a buying opportunity. He said, under Magnus Heystek’s article:

“ Of course one of the other self fulfilling reasons for a poor South African outlook is the extent to which influential financial consultants can persuade their clients to divest from the JSE/South Africa. But of course for every seller on the JSE there was a buyer.. who are they?”

Over on Facebook, meanwhile, debate has raged over whether South African investors are set to enjoy improved returns any time soon.

For Ingrid Uys, there is still much work to be done to clean up the corruption in the Zuma years. She said: “There was mention that around R1.3trn has been stolen during the Zuma years. I find it very odd that Ramaphosa is not leading with full vigour to recoup this money. Why pussy foot around? To protect the egos of ANC stalwarts. What a shame.”

Merlin Van Staden agreed, asking on Alec Hogg’s Facebook Page: “The seeming or theatrical facade of a clean up is flaunted yet not one implicated deployed has been charged, arrested, or gone on trial! Hence my question is Squirrel just talking the walk?”

Daniel Silke is delighted that South Africans are talking about the future. The respected political analyst said:

“Well done for posting this discussion Alec! You are both right…it’s not all good nor bad news! The ‘turnaround though, is real but slow and fraught with the uncertainties of intra-ANC politics. Magnus is right to expect few miracles but there are tangible shifts in government thinking. The recovery is more of a long-haul predicated on the moderates holding the balance of power. I do enjoy this discussion!”

Ernest Gerber couldn’t disguise his cynicism, saying: “Turning the SA economy around is like using a dinkie tug boat to change the course of the QE2. Trying to be the eternal optimist here but sometimes we have to be realistic.”

Vanessa Callender-Easby had a measured response. “South Africa is filled with the spirit of good intentions. Sadly this has had no effect in ridding the country of many criminals who remain firmly in place. The stock markets have performed dismally and no one with any sense will invest in their business locally, while their property and other rights remain tenuous at best, held in place by promises at present.”

Jen Aberdein Longworth played the person, not the ball, saying: “Magnus is sometimes all doom and gloom IMHO.” Jerri Mperdempes did, too, urging Heystek to emigrate. “Magnus must go to Australia, he will be happier there.”

Michael Wilbraham weighed in, with this wry remark about the hot debate between Heystek and Hogg: “Either way – only one of you will be right!”

Do you think Ramaphosa and team can turnaround the South African economy to the benefit of investors? What do you think it will take to get South African equities moving upwards? Share your views here, below this article, or join the conversation on Alec Hogg’s Facebook Page.