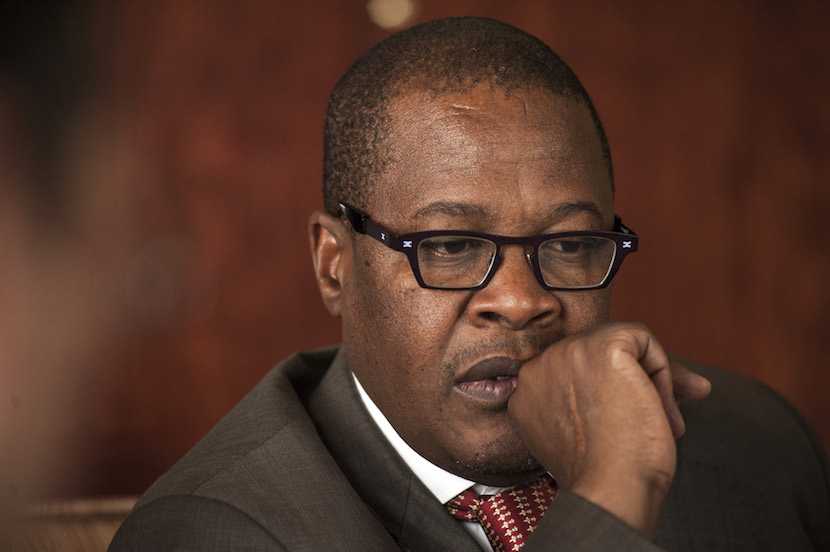 Brian Molefe, you might recall, was the laughing stock of South Africa when he claimed he was at a shebeen in Saxonwold, after reports indicated that he had been in the vicinity of the Gupta family compound regularly. Later, Molefe burst into tears on television in 2016 at a conference on Eskom’s financial reports when talk turned to the #StateCaptureReport compiled by former Public Protector Thuli Madonsela. Molefe has been a key link in allegations that Eskom may have fraudulently given money to a Gupta-linked company to enable it to buy a coal mine. Molefe has also vigorously promoted the benefits of a nuclear build programme, which many believed would bankrupt the country while its beneficiaries reaped the benefits of tapping into state contracts. Recently, details of Molefe’s hand in state capture at Transnet have been fleshed out at the Zondo commission of inquiry into state capture. The facts have angered many people, who want to know why it is taking so long to put Molefe behind bars. – Jackie Cameron

Brian Molefe was once one of South Africa’s most respected business leaders. Now, the call for him to go to jail for corruption is growing louder by the day as evidence mounts about his integral role in aiding and abetting former president Jacob Zuma and cronies in raiding state coffers.

As his government-produced biography reminds us:

Hugely impressed with his acumen, the Glasgow Caledonian University awarded him an honorary doctorate in engineering in 2015 “for work done at Transnet”.

“Before joining the PIC, he was Deputy Director General at the National Treasury, where he was responsible for Asset Liability Management.”

Molefe, who has a Master of Business Leadership and B.Com degree from Unisa and a postgraduate diploma in economics from the University of London “has received several awards in recognition of his contribution to the economy, particularly his role in the advancement of black economic empowerment”, says the government.

“These include being chosen Chief Executive Officer of the Decade by the Association of Black Securities and Investment Professionals (Absip), Molefe was named Africa’s ‘Business Leader of the Year’ by Africa Investor in Tokyo, Japan 2014, Infrastructure Investment Champion of the year (2016), while CNBC Africa honoured him with the Business Success in Africa award.”

But, while Molefe painted a picture of himself as a professional committed to the economic development of the country, behind the scenes he has been enriching himself and his friends.

The details of how Brian Molefe played a central role in state capture have been unfolding at the Zondo commission of inquiry.

At Transnet, for example, he facilitated work for McKinsey. “McKinsey bagged eight contracts over a two-year period under Molefe as CEO, which were worth R2.1bn – with some amendments made to the scope of the tender to ensure continuity,” reports TimesLive.

Molefe has been described as an architect of state capture, also helping to bring Eskom to its knees.

BizNews community members have reacted with anger, demanding jail time for a man that has inflicted real damage on the South African economy.

The most popular comment under Brian Molefe, chief state capture specialist, just got a few steps closer to jail – #Zondo was from baasted_123

“I would LOVE to watch this dirtbag cry in jail… for a very long time!!!
“When?, when?, when?
“But they must go after his personal assets as well. He must go to jail completely bankrupt!”

For Klaus Muller that isn’t enough justice for the direct and indirect damage Molefe has inflicted on South Africa and its people. He added: “A very long time? Death & one day! Rot in jail for the rest of your miserable life & one day, just to make sure. Confiscate everything he ever possessed…hate gets away with me!”

Kickingstones reminded the Biznews audience that Molefe received a hefty golden handshake after leaving Eskom:  “R30 million pension pay out for 18 months of malfeasance?
Not shabby !”

Jane refreshed memories that Lynne Brown, former Minister of Public Enterprises and former premier of the Western Cape, is implicated in state capture and has helped position Molefe in the various state-owned entities he has run. She commented: “…and Lynne Brown didn’t know all this?????”

Some believe that the corrupt and the captured will get away with their deeds.

Said The Navigator “An associate/cadre of the ANC elite going to jail for corruption? In South Africa? I don’t believe a word of it. Never happened yet. I can’t even say I’ll believe it when I see it, because he will be out quicker than he goes in. Look at Shaik, Yengeni, etc.”

For Sharky912, it’s critical for President Cyril Ramaphosa to move quickly to bring the corrupt to book. The BizNews commentator said: “The new President Ramapromises better get all the looters to jail asap, and get all the funds looted paid back also asap. If any investors want to make a investment in SA at present … these are the most important and urgent steps , they must demand from the looting cANCer and its leadership.
Pay back the money , and go to jail for life.”

Cldntgiveash1t. once again demonstrated that he does Giveash!t about South Africa. He said:

“There go the sacrificial lambs to the slaughter but don’t worry comrades I’m sure one of the “doctors” contracted in for the purpose will ensure you contract the same “life threatening ” and highly localised, and miraculous Lekau type lebenfivve and sixity thousand one strain of “Azanian diabetes” aka ANC’s get out of jail free card , as Shabby Shaik. This strain is highly contagious and affects but is not limited to the ANC-mafia blood strain.Easily curable with extensive golf therapy , boutique cafe’s , cigars and regular contact with investigative journalists willing to be ANC approved punch bags.Woe betide the poor sod that nicks a loaf of bread that will have to do double time to apappease the outrage. As usual the politicians at the apex of the enterprise will be quaffing single malt and toasting their success at another very finiancially beneficial exercise as per the Marxist textbook on how to rob a country blind and let some other sucker take the fall .Very brave cadres these,beating the single malt bottle into submission all in the name of liberation.and at the expense and on behalf of the extorted voting fodder.Well done , so while we await the outcome of the commission , no surprises expected, really , absolutely none , we’ve no doubt that once all the SOE’s have been topped up again it’ll be a do over 2.0 , just without all the mistakes the last bunch made.Very clever , do they know they were guinea pigs for this perverse version of how to run , sorry , ruin a country?.

Peter Rossfour, as usual, penned a thoughtful response to the Daily Maverick article.

“A PROMISE IS ONLY VALID ONCE IT IS FULFILLED.”
Slogans and Sayings – Peter Rossfour (unpublished).
We live in land of eternal promises which somehow never seem to be fulfilled. Witness Ramaphosa’s “New Dawn”. his “promise” to halt corruption, to bring those involved in Zuma and the Guptas “State Capture”, to book, and see they get jail time. Promises, promises, promises!
To date, since the end of 2017, NOT A SINGLE of these dastardly perpetrators has been prosecuted or jailed! As a matter of fact, some of the worst, like the inimitable “lovable” uber-gangster, Ace Magashule, sit smugly and snugly in top government positions, happily feeding at the golden through undisturbed. And if rumour is true that that scion of the fuel industry, Joematt-Petersen, is returning as an MP in Ramaphosa;s new cabinet, then nothing more has to be said on Ramaphosa’s promises.
Molefe, a despicable, lying, uber-corrupt thug, should have been put away LONG ago, but instead he still wines and dines on only the best, tends his many properties, and goes about cocking a soiled finger at the Establishment, the “judicial” system, the country,, and its people!
Sorry Folks, don’t hold your collective breath, i “PROMISE” you, Molefe is not going to jail soon. he’s Royal Game.
AISCH!!!!!!!!!!!!!!!!!!!!!!!!!!!!!!!!!!!!


Geoff Coles is also cynical about the likelihood of Brian Molefe standing trial.
“I would like to think that Molefe and Singh have been forbidden to leave SA and have had their passports withdrawn….. not much chance of that I suppose!”

Adrian Louw reckons Brian Molefe and his accomplices are lucky to be living in South Africa.

“A litany of fraud, corruption and high treason. They would not have survived these charges if this happened in China. These…suspected robbers would have both been given the death penalty and execution within minutes if found guilty.
We will have to wait for all their Eskom pillaging to be uncovered now. By the time all the court cases are over they will have died of old age. If the court cases do come to finalization I expect they will have to be sentenced posthumously. That may be why we can’t see the lightest spec of worry in their eyes. As we speak I bet they are chuckling about all this fuss.
Another scenario; The courts suddenly snap out of the coma of capture and do their job. Both are found guilty, multiple life sentences are imposed.
The ANC protests, this was justified “struggle accounting”, blows up the houses of parliament and forces the President to grant both a full unconditional pardon.
Of course this last option can never happen with Ramaphosa as our president.
Just my idle thoughts and speculation.

On Alec Hogg’s Facebook, Saffers revealed their indignation that Brian Molefe has been allowed to get his own way for so long.

Albano Amorim asked: “When are they going to charge this guy? Is a disgrace of this country.”

Andie Lawrence had a similar question: “And,, where is Cyril going to take this?”

Katja Offerman is also tired of hearing evidence of corruption – but not seuing any action against it. “But we knew this all already, anyway let’s commission away.” So is Kathy Naylor. She asked: “And how much longer do we have to wait for him to be jailed?”

Ditto Paula Pettit “And so??????? nothing ever happens 🎃.” And Sunette Raath: “And still nothing.” And Ruby Sylvester: “Now what?????” AND Jurie Anatius Blanche “So what? Nothing will happen.”

Zinnie Alberts Kirkby reminded BizNews visitors that former president Jacob Zuma is still out of jail. “Will ZUMA ever be prosecuted for all his crimes ? ….urgh,” asked the Facebook commentator.

Mark M Wade had similar thoughts. “But will one of those crooks every be charged, arrested, tried, imprisoned – or pay back the money? It’s been years since Zuma stole R275 million to build his elaborate kraal and nothing’s happened.”

Fran Davidtsz, on the other hand, thinks the wheels of justice are turning, albeit slowly. Of the Zondo commission, Fran said: “I am glad it is being revealed. Am hoping that the criminals responsible are brought to justice.”