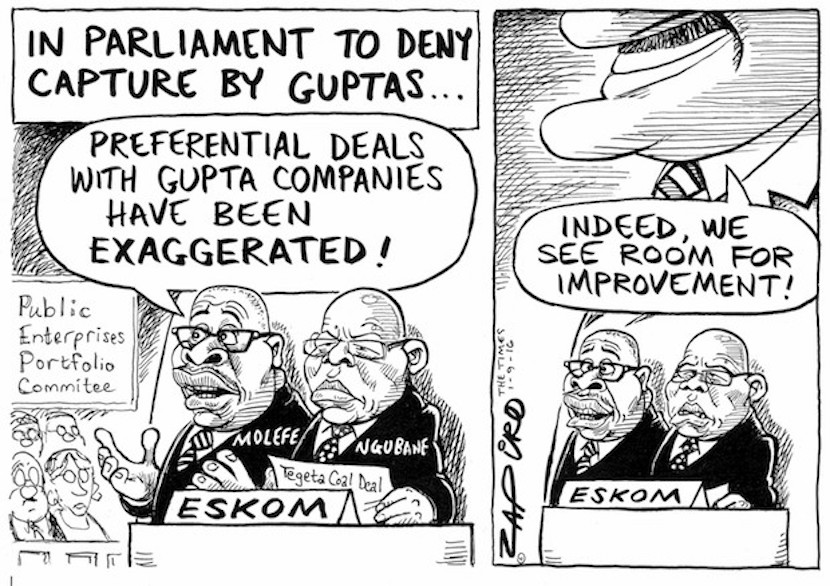 Eskom boss Brian Molefe is not coping well with the stream of allegations that point to his role as a central figure in the capture of state entities by the Gupta family. He broke down in tears at a conference on Eskom’s latest financial reports when talk turned to the #StateCaptureReport compiled by former Public Protector Thuli Madonsela, which was released to the public this week. Molefe has been referred to as a friend of the Gupta family and is a key link in allegations that Eskom may have fraudulently given money to a Gupta-linked company to enable it to buy a coal mine. Molefe has also vigorously promoted the benefits of a nuclear build programme, which many believe will bankrupt the country while its beneficiaries reap the benefits of tapping into state contracts. Molefe’s prominent appearance in the #StateCaptureReport has evidently caught him by surprise. With an illustrious career in powerful roles, including as chief executive officer of the state’s Public Investment Corporation, and influential friends, perhaps he thought he was beyond reach? At the very least, it seems that Molefe’s friends forgot to let him know that he featured in the document, while alerting others – including co-operative governance minister Des van Rooyen and mines’ minister Mosebenzi Zwane, who made noises about going to court to stop the release of the #StateCaptureReport. It’s starting to look a bit like a case of  ‘every man for himself’ as the web of deceit around the Gupta and Zuma families unravels. – Jackie Cameron

Johannesburg – Eskom CEO Brian Molefe has lashed out at former public protector Thuli Madonsela’s use of cellphone records to suggest he had numerous meetings with the controversial Gupta family.

The public protector’s report on state capture was released on Wednesday, highlighting links between the Guptas and government officials.

Yoh … it is tough. Still cant get over Molefe crying and Ngubane's anger #Eskom pic.twitter.com/G5L2FcX8TH

As part of the report, cellphone evidence revealed that Molefe and Ajay Gupta, the eldest of three Gupta brothers, made 58 telephone calls to one another between August 2015 and March 2016.

Moreover, cellphone tracking records obtained by the protector’s investigators indicate that Molefe was at or near the Guptas’ Saxonwold, Johannesburg compound 19 times between August 5 and November 17 2015.

But Molefe broke down in tears as he hit back at these details in the report.

“There’s a shebeen there, two streets away from the Gupta(s). I will not admit or deny that I’ve gone to the shebeen.

“But there is a shebeen there,” a tearful Molefe added.

He then alleged that the public protector failed to get sufficient answers from him on the claims levelled against him.

“In my case the public protector has painted me with a corrupt brush,” he said.

Brian Molefe says his children ‘will be taunted at school’

“During that period my children will be taunted at school… when there is no basis,” Molefe added.

Before making these comments, Molefe provided his version on what had happened regarding the sale of Glencore’s Optimum mine to Gupta-linked mining company Tegeta.

He accused Glencore of previously trying to sell coal to Eskom at a rate of R570 per tonne, when he said the price should have been below R200.

Molefe said that subsequent to the sale of the mine, Eskom has been paying the cheaper rate. He further added that had he accepted Glencore’s price, the public protector would have scrutinised the deal and labelled it corrupt.

Molefe hinted that his current troubles with the public protector’s report could stem from his refusal to accept Glencore’s price for coal.

“Having said that, I’ve had time to apply my mind to this matter [of the state capture report]. I think it’s all because we refused to give Glencore R570,” he said.

“What pains me the most is that I never had the opportunity to explain to Thuli Madonsela what I have explained now,” he added.

Shortly after making these comments, an emotional Molefe headed backstage away from the media’s glare. He returned shortly afterwards to answer questions.