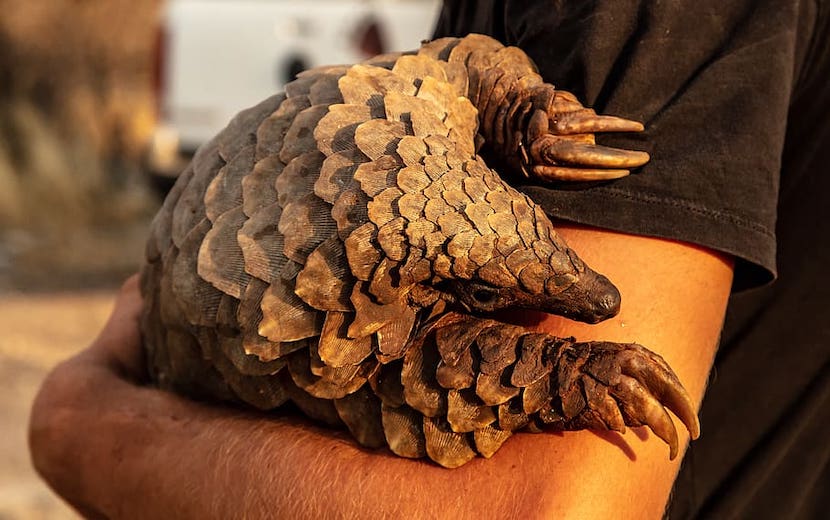 The pangolin, the shy armoured creature of the night that rolls up when it senses danger, is now threatened by extinction as they are regarded as an exotic meat in China. Pangolins are openly sold in some restaurants in China and their scales made from keratin, the same substance as rhino horn, are prescribed to treat skin disorders despite lacking medical benefits. But help for pangolins emerged from an unexpected source as it came to light that the latest outbreak of the coronavirus can be linked to pangolins. University researchers in China found a 99% match between the coronavirus found in pangolins and the virus responsible for the latest outbreak of the disease. In response to this, the Chinese police have been raiding houses, restaurants and makeshift markets across the country, arresting nearly 700 people for breaking the temporary ban on catching, settling or eating wild animals. Tony Weaver thinks it may be a ‘ray of hope for endangered species globally’ as China may finally start to crackdown on wildlife trade. First published in Die Burger. – Linda van Tilburg

Call it the revenge of the pangolin.

It’s been one of the most under-reported stories of recent times, the link found by researchers in two entirely separate studies between the deadly coronavirus epidemic sweeping China, and now the globe, and the consumption – or contact with – pangolin scales and meat.

The two studies were reported almost simultaneously by Daily Maverick in South Africa and Xinhau News Agency in China. The Daily Maverick story, by Don Pinnock and Tiara Walters, broke the news of both studies, one by researchers at Baylor College of Medicine in Houston, Texas, the second by a team at the South China Agricultural University, while the Xinhau report, which was not bylined, reported on the South China study.

Both are the kinds of studies that in a normal world, would have gone virtually unnoticed. But this isn’t a normal world: the coronavirus, if unchecked, has the potential to become a global pandemic.

Some reports claim that coronavirus could rival the 1918 Spanish flu epidemic, which according to Wikipedia killed “anywhere from 17 million to 50 million, and possibly as high as 100 million” people, a staggering 1% to 5% of Earth’s population at the time.

Understandably, the World Health Organisation, while declaring coronavirus a Public Health Emergency of International Concern (a “global health emergency”), has tried to allay fears of a global pandemic on the scale of the Spanish flu: the world is a very different place 102 years later, the quantum leaps in health, science and technology are light years more advanced.

But the news that a global health emergency can be traced back to consumption or handling of the humble pangolin (to bats, actually, with pangolins as the vector), the most trafficked mammal on Earth, is staggering in its implications. And at the same time, a ray of hope for endangered species globally.

Previous outbreaks of disease have been traced to animals – Ebola to bats, SARS to Asian palm civets, MERS to camels. Many (albeit not all) of the threats to endangered wildlife – and African wildlife in particular – come from the East and the trade in wildlife products for their traditional culinary, status, and medicinal uses.

Rhino horn, ivory, abalone, tiger and lion bones and claws, and bear bile are just some of the sought-after products. But the pangolin trade is particularly destructive – as I have written before, “it takes around 1,900 pangolins killed to produce one ton of scales. In 2018, 48 tons of scales were seized, the equivalent of 91,200 pangolins – a helluva lot more gets through undetected. Pangolin scales are a lot easier to smuggle than rhino horns or elephant tusks.”

China reacted fast to the news of the pangolin breakthrough: on 10 February, its legislature, the National People’s Congress, announced it would update wildlife protection laws to “toughen the crackdown on wildlife trafficking”. Xinhua reported that “the supervision, inspection and law enforcement should be strengthened to ensure that wildlife trade markets are banned and closed.”

The sad fact is that it takes a global health emergency for the world’s biggest consumer of illegally trafficked wildlife products to take action.

The happy fact is that there may, finally, be hope for that most endearing of creatures, the humble pangolin.