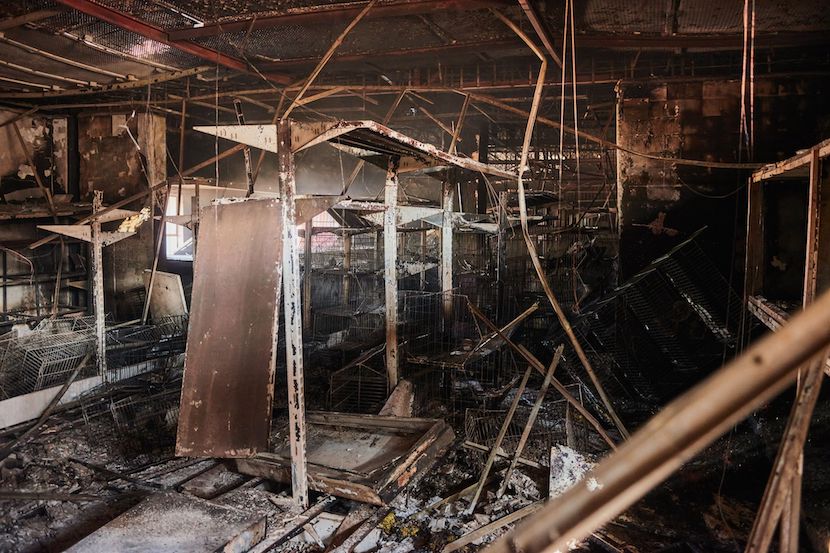 Undoubtedly set off by the arrest and imprisonment of Former President Jacob Zuma, the riots that gripped KZN and Gauteng last week saw numerous businesses looted and destroyed and at least 215 lives lost, reports Bloomberg. President Ramaphosa and a collection of government members have said that the attacks against South Africa were “planned and orchestrated,” with those involved “party to sedition and economic sabotage”. As S’thembile Cele reports, authorities have arrested half a dozen individuals who allegedly instigated the riots. According to an earlier piece published on BizNews.com, former state security members used their networks to spark the rioting. The piece, which was first published on MyBroadband, notes that “former senior security agency and ANC members aligned with Jacob Zuma have allegedly instigated the unrest in Gauteng and KwaZulu-Natal.” – Jarryd Neves

(Bloomberg) – South African authorities arrested six people who allegedly instigated a week of rioting that claimed at least 215 lives and have charged them with inciting public violence.

One of the six was released on bail, while the other five are in custody pending their bail hearings, acting Minister in the Presidency Khumbudzo Ntshavheni told reporters in the capital, Pretoria, on Monday. The minister declined to name them, saying she didn’t want to jeopardise investigations.

The unrest was triggered by former President Jacob Zuma’s arrest on contempt of court charges. Hundreds of shops were looted and telecommunications towers and other infrastructure destroyed in the KwaZulu-Natal and Gauteng provinces before thousands of soldiers were deployed to help the police restore calm. While roads, rail links and ports have reopened, several areas are confronting shortages of food, medicines and fuel.

President Cyril Ramaphosa and members of his administration have repeatedly said the attacks were planned and orchestrated, and that those responsible were party to sedition and economic sabotage. It’s unclear what the alleged instigators aimed to achieve.

The Presidency and the National Treasury are working on plans to help businesses and individuals who’ve been adversely affected by the turmoil. The National Economic Development and Labour Council, a forum that brings together representatives from government, business and labour, met twice last week to consider proposals.

“We would want to see the announcement of that package this week,” said Matthew Parks, parliamentary coordinator for the Congress of South African Trade Unions, the country’s largest labour group.

Cosatu proposed that those who lost their jobs receive payouts from the nation’s unemployment insurance fund, and those who didn’t qualify for other aid be paid a R350 ($24) monthly grant until the end of the year. The federation also wants companies affected by the rioting to qualify for tax relief, for loan guarantees to be extended to enable them to rebuild and for funding for a presidential employment programme to be tripled to R33 billion so it can create at least 1 million jobs.

Financial institutions and insurance companies are reflecting on what they can do to help, and business groups would be sympathetic should the government decide to revisit its debt consolidation plans, said Sipho Pityana, the president of lobby group Business Unity South Africa.

“The extent to which we provide relief measures, notwithstanding the constraints of the fiscus, have to be assessed against the repercussions of doing nothing,” he said. “It will be a tricky balancing act for the state, but as business we understand the difficult situation that government is in and there is no point in taking a very rigid position.”