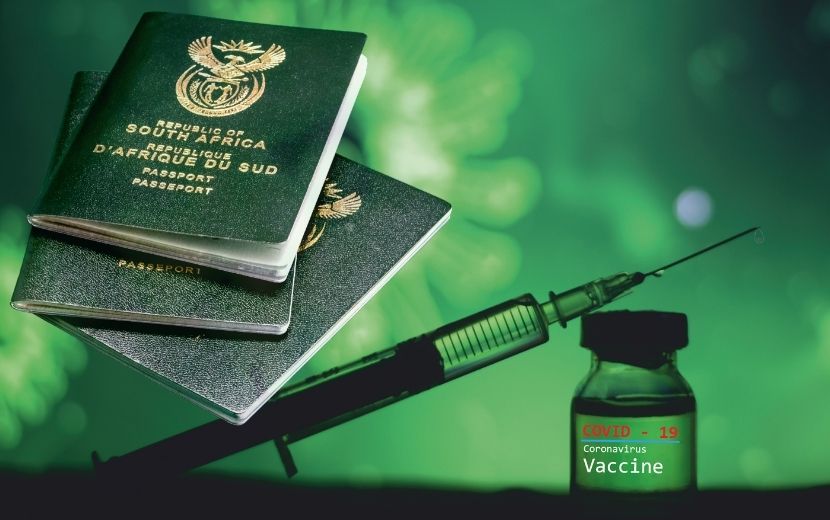 Last week, Discovery CEO Adrian Gore announced Discovery’s intention to move to a mandatory vaccination policy for SA-based employees effective 1 January 2022 – a decision that may be the beginning of a snowball effect towards the implementation of mandatory vaccination policies in the country. In this article, Jonathan Katzenellenbogen advocates in favour of introducing vaccine passports in South Africa arguing that; ‘The vaccination process needs to speed up for herd immunity to be achieved soon, and the introduction of passports could help with this.’ This statement brings two points to mind. Firstly, in an interview with BizNews founder Alec Hogg last month, Discovery’s Chief Actuary Emile Stipp unequivocally stated that ‘herd immunity is something that we must all forget now.’ Secondly, Stipp’s claim that around 80% of South Africans have already had Covid-19 means that as many as four out of five South Africans already have immunity by virtue of their prior infection – immunity which a recently released study in Israel found to be significantly more robust than vaccine-induced immunity. Katzenellenbogen also asserts that; ‘Above all, the greater the use of vaccines, the faster we will return to a better-functioning society.’ While this argument may have some merit, one must wonder what the repercussions of vaccine passports and mandatory vaccination policies will have on a society effectively divided by such policies. In response to Katzenellenbogen’s article – which was published on the Daily Friend – BizNews founder Alec Hogg received an email from a community member. This response – which can be read under this article – asserts that; ‘It is obvious that the attitude of individuals and institutions/businesses promoting Covid-vaccination is changing towards those who are not prepared to take the jab that can be described as arrogant and offensive. And it will destroy families and communities. If you are not prepared to respect the decision of the individual, you cannot expect the individual to respect you.’ – Nadya Swart

Rising vaccination rates mean we might be back to a new normal soon. But vaccine hesitancy by sizeable portions of the population may curb or delay our reaching herd immunity. And that will force us for a long time into tightened lockdowns with every new wave, to prevent Covid cases overflowing the hospitals.

Requiring people to show evidence of inoculation like vaccine passports in order to use certain facilities will play a useful role in the return to the new normal. Without these documents our emergence into the new normal will be slow and hobbled.

Making vaccines mandatory might be considered as an alternative to passports, but this could be counterproductive. The very act of making them compulsory might raise protest and hesitancy. Best is to show there are rewards from taking the jab.

Various surveys put the degree of vaccine hesitancy among adults in South Africa at between 25 and 60 percent. Results released earlier this week of a survey commissioned by the state’s privately financed Solidarity Fund and government communications found that about 38 percent of those surveyed were not willing to be vaccinated. That survey may indicate that a 60 percent take-up rate of vaccines required for herd immunity may be just possible, but not certain. Therefore, there could be a continuing risk of waves of infection.

The vaccination process needs to speed up for herd immunity to be achieved soon, and the introduction of passports could help with this. Only 6.5 million in South Africa, about 11 percent of the population, have been double-jabbed so far. Making vaccines compulsory to do certain things could result in a rush of people volunteering their arms for jabs.

Last week Discovery became the first South African company to insist that its employees get vaccinated. Other South African companies are waiting for possible legal challenges before they too implement the requirement. After all, organisations have a legal duty to ensure reduced risks from known dangers to employees and those on its premises. The big tech companies in California already require their employees to be vaccinated. And increasingly across the world, evidence of vaccination is needed to get into a bar, restaurant, or other public venue, or take a flight.

The Minister of Health, Joe Phaahla, has said the South African government is considering restricting access to public amenities to those who have been vaccinated. President Cyril Ramaphosa has asked the Cabinet to look into measures to get the country’s economy going, including the use of vaccine passports.

Since the introduction of vaccine passports in France in early August, people are now required to show these documents to get on a plane or train or enter a restaurant or bar. The day after the policy was announced, a million people signed up for vaccines. And higher vaccination rates have helped lower the number of Covid cases. That is proof of the public good that comes from vaccine passports.

Even if there was an instant test for Covid-19, vaccination passports are here to stay and their use will rapidly spread.   Vaccinations lower the risk of infections spreading the disease and crowding up hospitals and intensive care units. Jabs mean far fewer hospital admissions and therefore ensure a vast saving of public resources. The effectiveness and safety of the vaccines has been proven, with highly adverse reactions extremely rare. Above all, the greater the use of vaccines, the faster we will return to a better-functioning society.

The idea of vaccine passports horrifies many libertarians, who see government overstepping the mark and threatening civil liberties. And the idea that vaccine passports are a nudge to have the jab is viewed by some as tantamount to a government forcibly injecting its citizens.

The Free Market Foundation, FMF, one of the most eloquent proponents of the libertarian view in the country, raised the alarm against vaccine passports in a Facebook post last week. “Regardless of one’s view of vaccines themselves, the idea of vaccine passports and passes to enter public places stinks of discrimination. It wasn’t so long ago that the majority of South Africans needed a pass to use the services they paid for”, the FMF said.

To compare vaccine passports to apartheid era pass books, that blacks had to carry at all times to show permission to be in a white area, is absurd. As vaccinations are free and easily available, there is little problem in obtaining access to a vaccine passport. Hence the claim of exclusion on unfair grounds – discrimination – is not valid.  Moreover,  places to which the public is admitted have a right to refuse entry to individuals that are disruptive and pose a risk. Proof that they are fulfilling a legal duty to protect people on their property is required for protection against law suits and to fulfil requirements for insurance.

Why is there not a sound of protest about those vaccination certificates which must show evidence at least of a yellow fever jab to gain entry into most countries?

The reason is that these are now accepted and hardly noticed, so that there is no place for misplaced outrage. There is a perfectly legitimate role for governments to uphold conditions for public health.

The ultimate authority on questions of liberty is the 19th century philosopher John Stuart Mill. There is a strong argument that Mill would have favoured vaccines and vaccine passports on the basis of the “harm principle”.

In “On Liberty”, Mill wrote, “The only purpose for which power can be rightfully exercised over any member of a civilised community, against his will, is to prevent harm to others.”

Not having a vaccine causes potential harm to others, as people are then at higher risk of infection with Covid, spreading the disease and pushing up use of scarce medical resources.  Therefore, having to present evidence that you have had the vaccine to gain entry to crowded spaces is a public good and perfectly acceptable.  Allowing the unvaccinated entry to a public gathering would therefore pose the risk of harm to society.

Enough people have to be convinced to have a vaccine in order for herd immunity to be achieved. Giving people a nudge to take the vaccine is a perfectly legitimate activity for a government, particularly as there is a public good that can come out of this. Mill would certainly have supported the use of vaccine passports on the ‘harm’ principle, as well as to nudge people into having jabs and increasing the public good.

Some libertarians argue that vaccine passports are the “slippery slope” to draconian intrusions in our daily lives. Yet, libertarians do admit that some sort of authority is required to act as referee in society, run the justice system and ensure appropriate regulation. This is what government is doing in requiring vaccine passports. There is certainly room for debate on the extent to which the unvaccinated should be excluded from facilities and activities for safety reasons and to provide the nudge.

The government response to the pandemic has greatly threatened liberty, with its curfews and restrictions on movement and activities, not all of which have been key to social distancing. One way of preventing governments from going down the “slippery slope” of infringing liberties would be through the introduction of vaccination passports.

This writing with reference to an article by Jonathan Katzenellenbogen in Daily Friend this morning, in which he is siding with “pro-vaccinators” and pleading for the implementation of the vaccine passport.

I respect his view on this subject and it is not my intention to create a “word war” or personal attack on his person. By my attitude I exercise “Freedom of Choice” and “Freedom of Speech”.

It might well be worth the effort to study two subjects that are well relevant to the situation at hand – “Totalitarian Rule” and “Mass Formation/Mass Psychology”. Examples where these two subjects have relevance are the Russian Revolution under Stalin and the Holocaust of the Jews by Nazi Germany under Hitler. When people are bombarded with an idea or ideology on a large scale, it becomes the narrative or nucleus of thought and action – whether the idea or ideology is right or wrong.  Examples are even obvious in South Africa. People are aware of the fact that the ANC is failing South Africa and yet they keep voting for them. Another example is the destruction and looting we have experienced in July this year. In a situation like this, people can’t think, argue or act rationally. And obviously they will not ask the right questions either.

To compare taking Covid jabs with being vaccinated against Yellow Fever or Polio, in my view, is not completely justifiable but closer to the absurd. Those vaccinations were properly designed, tested and documented in all its stadia compared to Covid-vaccinations and they are absolutely effective. The long term effects of the vaccines “against” or “preventing” Covid are unknown and the word “against” or “preventing” is also not justifiable. It is similar to taking something for a headache when you know it is not going to help. And with the virus constantly evolving in different strains requiring booster jabs.. Well I rest my case.

How much of the “unknown” are you prepared to inject into your body? You are still a target to contract Covid and/or pass it on to other people, no matter what.

It is obvious that the attitude of individuals and institutions/businesses promoting Covid-vaccination is changing towards those who are not prepared to take the jab that can be described as arrogant and offensive. Apart from ignoring the civil rights of the person, the attitude is very similar to that during the Russian Revolution and the Holocaust. And it will destroy families and communities. If you are not prepared to respect the decision of the individual, you cannot expect the individual to respect you.

My body is sacred to me – a temple of God. You believe what you want and I’ll respect that but also respect me for what I believe in.