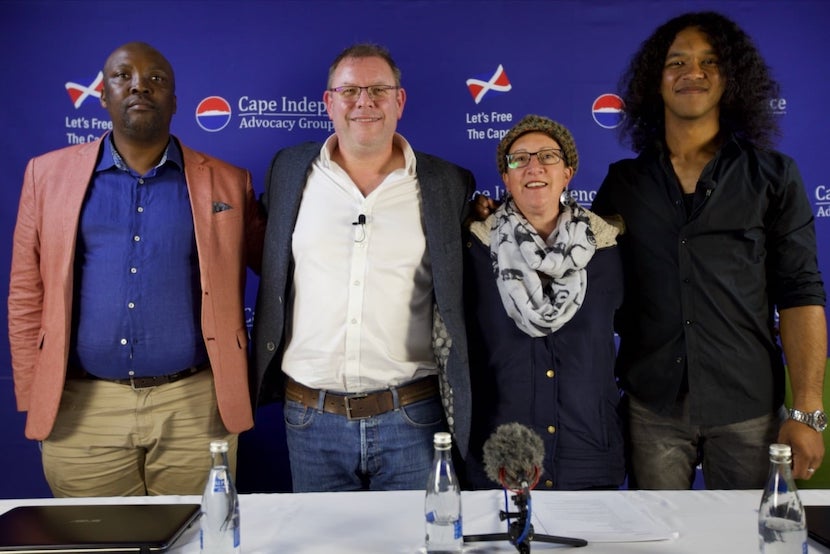 Earlier this week, the Cape Independence Advocacy Group formally handed over a request for a referendum on Cape independence. Phil Craig, the co-founder of the 18-month-old group, joined Alec Hogg to unpack exactly what this new development means for the Cape and the rest of South Africa. “I think we all understand that things are going horribly wrong in South Africa, and we are all looking for solutions. The solution that we put on the table is independence for the Western Cape, and we want to democratically consult with the people of the Western Cape and find out how they feel about it,” he explains. Craig also goes into detail about why it makes sense for the Democratic Alliance (DA) to support the referendum in the lead-up to elections. – Claire Badenhorst

Phil Craig on why handing over a request for a referendum is significant:

Well, we have now formally called for a referendum on Cape independence and this is something we’ve considered quite carefully in terms of the timing. We called on Premier Alan Winde to call a referendum, and we then met with the presidency and we formally notified President Ramaphosa of our call for a referendum, which we handed to Premier Winde. So now we’ve done it. We’ve pressed the button. We formally want a referendum.

It’s a good question because I think a lot of people have the misconception that a referendum is the end of the process as opposed to the start of the process. A referendum under South African law isn’t binding unless the parties choose to make it binding. So at this point in time, what we’re trying to establish is, what do the people of the Western Cape want? So effectively, what we’re talking about is democracy and that’s always been our position. You know, we’re bipartisan. We represent people from across the political spectrum and first and foremost, we want to consult with the people of the Western Cape.

On whether the timing is intended to make the DA support the referendum:

Yes, to a certain extent. Not just the DA but clearly the DA is the party of provincial government in the Western Cape [and] is fairly critical to the process. What we’ve seen from Cape independence is that the tail is trying to wag the dog, which is right. We’ve got this scenario where there’s three million voters in the Western Cape – let’s assume that a million of them are going to vote for the ANC and a couple for the EFF – that leaves two million, let me call them relatively sane, sensible people who are looking for solutions. We know from polling, which we’ve done twice now, that roughly 1.4 million of those two million voters are favourable towards Cape independence. So it’s a really significant number of people and politically, you know, that’s significant at this point in time where the political parties are going to the polls – then clearly this is a discussion that we want to have.

Actually, it’s interesting [that] you bring it up because we’re busy working on a voting guide, which we hope to have released by the end of the week, and we have written to all of the major political parties and asked their position on two questions. Do they support Cape independence? And perhaps more critically at this point in time, do they support a democratic consultation with the people of the Western Cape in the form of a referendum on Cape independence? We’re going to release that at the end of this week, and I think it’s going to shock an awful lot of people.

The DA doesn’t support Cape independence outright at this point in time, and I think that’s for understandable reasons – they’re cautious about the rest of the country, although perhaps that’s something we should discuss because I think perhaps even that they’ve misunderstood. But at the very least, we know from our polling that 58% of people in the Western Cape want a referendum; we know that raises to 65% amongst DA voters; we know the majority of DA voters want independence outright, so I think they absolutely have a moral obligation to consult with the people of the Western Cape in a referendum on Cape independence, and actually, we fully expect them to do so.

On why the DA should support the referendum (despite upcoming elections):

Let’s be clear. The referendum can’t actually be called now. It’ll probably take about 18 months, I’m guessing, before all of the legislative hurdles are out of the way. I would expect us to see a referendum in about 18 months’ time. But clearly, there are going to be two pressure points every five years – the local government elections and the national elections. Every time we come to this, the DA will be able to roll out the same argument and say, well, hang on a second, please don’t do this to us now. But actually, this is the only point in time where they’ve really got their backs against the wall. And I think in some ways they’ve misunderstood two things. Look, I should say ‘in our opinion’.

So first of all, one of the things that Corne Mulder talks about a lot for the Freedom Front – who face the same problem of being a national party where the majority of their voters are actually outside of the Western Cape – and Corne always says, look, it’s not an ‘either-or’, it’s an ‘and and an and’. And this is something we have pushed the DA on and say, look, you absolutely don’t have to abandon your voters outside of the Western Cape – anything but. We understand that we’re in a crisis situation. You have political power and you have to use the fullest extent of your political power everywhere that you can, and where you’re the provincial government, and actually, you can take us out of this disaster and away from the ANC completely, you must do that. That doesn’t mean you abandon your voters in Johannesburg or in Nelson Mandela. Where you can be the metro government, you must be the metro government. Where you can be in a municipality, then you must be the municipal government. And perhaps you’re none of those things up in Limpopo, but actually, perhaps you have some wards and you can form structures on the ground.

So actually, what we suggest to the DA is they should take that approach and say, look, we will protect everybody who votes for us to the fullest extent of the powers that we have. And in the Western Cape, where we have the most powers, we’re best placed to protect those people. But the other thing that I think the DA really is missing a trick on is, I think they’re assuming that their voters in the rest of the country don’t support this, and I really don’t think that’s the case. I think, perhaps, that it might be a more difficult decision in the rest of the country, but I think we’ve got this ideological divide and we see it all the time. The majority of our most fervent supporters live outside of the Western Cape because people who are outside of the Western Cape see – much more so than people in the Western Cape – just how disastrous this is and just how close we are to implosion. And I think an awful lot of people outside of the Western Cape want to have an ally, [they] want to see the DA be able to show what they can do, so take this opportunity, show what you can do when you control tax money when you actually are the national government – then they’re going to have massive influence over the rest of South Africa and actually use that as a showcase. That’s exactly how the DA got to where they are now. Helen Zille started off by being the mayor of Cape Town, from managing Cape Town very well and people saw that and then they got the province.

So, look, take over the Western Cape and show what can be done, support the other people, and in time, people will recognise the better the Western Cape does, more obviously, it will come to the rest of South Africa that the DA is a better option for government than the ANC or the EFF.

On what happens now:

So we’ve asked Alan Winde to call a referendum within 90 days of the referendum legislation being in place. That doesn’t mean that the referendum is going to take place in those 90 days, but actually, then he will agree on a time together with the IEC, and then they’ll fix this date. We don’t want to tie them to a very specific date because clearly a referendum is a major task and there’ll be other considerations, too.

So they’ve already got the private member’s bill before parliament. So we say, look, get that bill through parliament, get that bill passed, and then within 90 days of being passed, just assure us that you’re going to call a referendum. It doesn’t just have to be on Cape independence by the way. We understand that the constitution allows for these multi-question referendums, so actually, we envisage that referendum having lots of different things in there. We envisage it having the things that they’re already pushing for – control of the police, control of energy, federalism – the DA wants federalism. AfriForum says they want tax federalism, which sounds a lot better than federalism. And, you know, obviously we’re pushing for independence and we would like to see a consultative referendum that has all of those things on the ballot paper.

Clearly, we want Cape independence and the DA is already going down that route. So I think, you know, we’re all sort of dancing around this a bit because of the political sensitivities but there is going to be a referendum on Cape independence and surely everybody can now see that in terms of how this is all lining up. If we see what’s already in the public domain and we see what’s already been declared, then people must realise that a referendum is now inevitable, and let’s just get on with it. It’s democracy, after all.