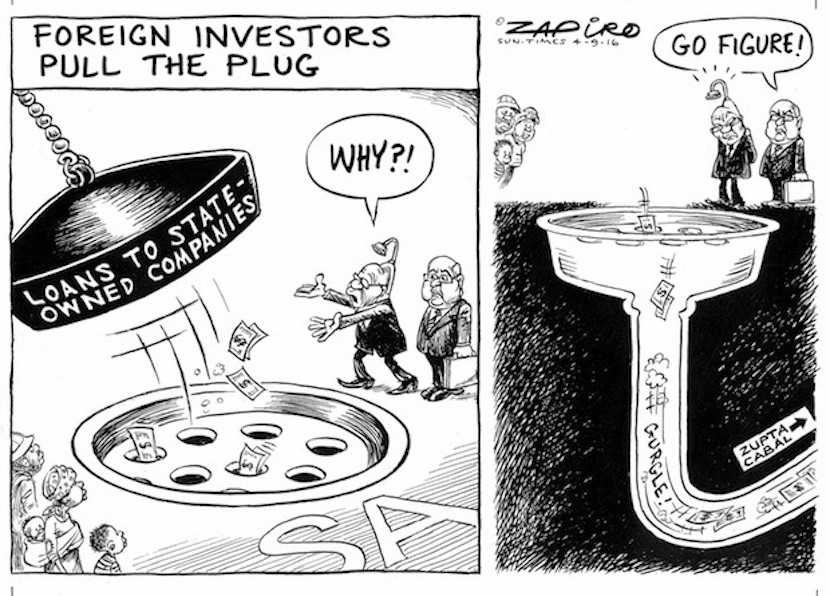 In a move to shift some of the debate away from Covid-19, community member David Lipschitz asks a valid question: Why is SOE corruption dealt with differently?

In light of all the scandals, corporate robbery, satisficing, and other shenanigans at SOEs, I’m wondering why directors and shareholders at SOEs aren’t treated in the same way as directors and shareholders of private companies which have to obey the Companies Act, all kinds of laws and rules for directors, etc. Perhaps you could ask one of your journalists to research this and explain why these rules don’t apply to the government, which is already South Africa’s biggest employer, assuming you take all their grant payees into account.

The most recent scandal is the R8.16bn that the South African Post Office has requested to “save the company”. This besides the R600m that they withheld from their employees to pay their employees medical aids, but then didn’t pay the medical aid providers. This is fraud (and it has disadvantaged the SAPO employees), and in a normal private company, the directors, accountants, salary clerks and others would have been arrested; and potentially not put on leave on full pay pending an investigation.

In response to 50 Shades of Grey and the Constitution, where Doctor Terry Berelowitz queries the argument on rights. Unnamed community member responds:

But then the vaccinated surely have a concrete slab of protection over them to protect them from the jumper – they will not get injured. The un-vaccinated are the ones taking the risk to their own peril?

And here’s a response to Michael Bradfield’s comments on Covid-19 vaccination. Questioning who the debate is really between:

Your reader, Michael Bradfield, makes the point shared by many of those on the pro-vax side of the Covid-19 issue, but he is missing a vital point. The debate is not between vaxxers and anti-vaxxers at all. His finding that 2/3 of these articles fall onto the anti-vax side is misleading and adds to the confusion. For example, it does not matter how many times organisations like PANDA, or their very astute leader, Nick Hudson states categorically, that they are not at all “anti-vax”, they are categorised as such. Sure, you do indeed get people and organisations that are blatantly anti any vaccine, but in this present case, we have an entirely new type of experimental injection which is called a vaccine and that may well be a great innovation and life saver … BUT … it is not yet proven to be that effective and according to the US VAERS system and the UK and EU equivalent early warning systems, it is more dangerous than any other vaccine in the last 30 years.

When Mr Bradfield states that “it is a fact that nobody can deny” that deaths are significantly reduced, then I believe that he has missed the “facts’’ from many countries that are coming out daily now showing that deaths are increasing at a huge rate amongst the fully vaxxed population. So the debate, if you read the majority of the so-called “anti-vax” side, is really about rejecting the notion that everybody needs to be jabbed to save everyone else from a disease where the highest average infection fatality rate is around 0.2% and that is for elderly folks. Below 60 this figure falls to around 0.05 and so on. The young and healthy figure is even lower, and in children this figure is close as you can get to zero. All health authorities have protection mechanisms in the form of statutory regulations that try to prevent harm from new medicines and vaccines. There is only one way for these processes to work, and that is time. There is no “warp-speed” concept with any kind of new or amazing technology around that can short-cut time. Therefore, nobody, and I mean “nobody” at this time can show if there are any long term adverse effects. Although the concept of the technology of mRNA vaccines or the Adenovirus types has been around for about 30 years, this type of vaccine has NEVER been used on humans before! If you believe that they are effective and safe, then that is your own choice, but why force and coerce the entire population to be jabbed, when such a small percentage may die from a disease that has a well proven IFR of 0.2% which is like a bad flu season? So to put this in perspective, the debate is between the Pro-ThisVax, and the Anti-ThisVax”! That is a whole other ball game. Try https://www.pandata.org and if you would like to refute or debate any of the wide range of articles, papers and video’s, I know for a fact that they would welcome your input. You could be dead right, but that is what makes BizNews so great because they publish both sides of the debate. Good scientists get to the truth, or close to it, but having robust, open debates without brute force.