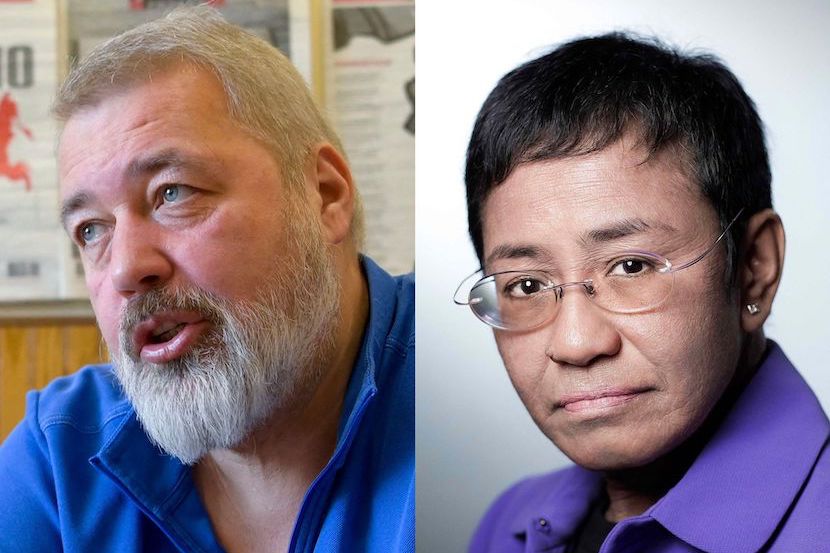 For the first time since 1935, the Nobel Peace Prize has been awarded for journalism. This year, Maria Ressa and Dmitry Muratov won the award for work to “safeguard freedom of expression.” Ressa, who has won praise worldwide for her investigations, became known for her inquiry into the alleged police abuses in Filipino President Duterte’s anti-drug efforts, says Bloomberg. The other recipient, Dmitry Muratov, is a Russian journalist who co-founded Novaya Gazeta – an investigative newspaper that is currently backed by former Soviet leader, Mikhail Gorbachev. Muratov is currently the editor-in-chief of the publication.  – Jarryd Neves

(Bloomberg) – Maria Ressa from the Philippines and Dmitry Muratov of Russia won the Nobel Peace Prize for their work to safeguard freedom of expression.

They are “receiving the Peace Prize for their courageous fight for freedom of expression in the Philippines and Russia,” the Oslo-based Norwegian Nobel Committee said in a statement Friday. “At the same time, they are representatives of all journalists who stand up for this ideal in a world in which democracy and freedom of the press face increasingly adverse conditions.”

The two will share the 10 million Swedish krona ($1.1 million) prize, the first awarded for journalism since German reporter Carl von Ossietzky won in 1935.

Ressa has won wide international praise for investigations of alleged police abuses in President Rodrigo Duterte’s anti-drug efforts. In June 2020, she was convicted of cyber libel charges initiated by a businessman who believes he’d been defamed by a report on his alleged links to drug smuggling.

Journalism advocates say the case is part of a campaign of official intimidation. Duterte’s spokesman at the time denied the president’s role, calling the conviction a result of “bad journalism” and “bad lawyering.” Freed on bail, Ressa appealed the ruling, fought a tax evasion case as well as a claim by regulators that financial support her outlet Rappler received violated a ban on foreign ownership of media – and still published.

Ressa was included in Bloomberg’s 50 Most Influential ranking in 2020 and had been in similar lists by Time Magazine.

Rappler CEO and 2021 Nobel Peace Prize Laureate Maria Ressa has been vocal against the decline of democracy in the age of disinformation.

“We will not duck, we will not hide. We will hold the line,” said Ressa in the documentary ‘A Thousand Cuts.’ #NobelPrize pic.twitter.com/Ugug503Hnx

Muratov is co-founder and editor-in-chief of Novaya Gazeta, an investigative newspaper backed by former Soviet leader Mikhail Gorbachev that has been a long-time source of hard-hitting reporting on Russia under Putin’s rule. It has paid a heavy price, with at least four of its journalists killed, including Anna Politkovskaya, who was shot dead on Oct. 7, 2006, Putin’s birthday.

He denied any state role in the murder of Politkovskaya, an outspoken Putin critic and investigative reporter who chronicled human rights abuses in Russia’s Chechnya region. Investigators have never identified the person who ordered the hit and Russia’s 15-year statute of limitations for prosecuting the mastermind expired on Thursday.

Novaya Gazeta “is the most independent newspaper in Russia today, with a fundamentally critical attitude towards power,” the committee said.

Russian President Vladimir Putin’s spokesman said the Kremlin congratulates Muratov on winning the Nobel Peace Prize. “He is committed to his ideals, he is talented, he is brave,” Dmitry Peskov told reporters on a conference call. “Of course, this is a high assessment, we congratulate him.”

Annual prizes for achievements in physics, chemistry, medicine, peace and literature were established in the will of Alfred Nobel, the Swedish inventor of dynamite, who died in 1896. The prize in economic sciences was added by Sweden’s central bank in 1968.