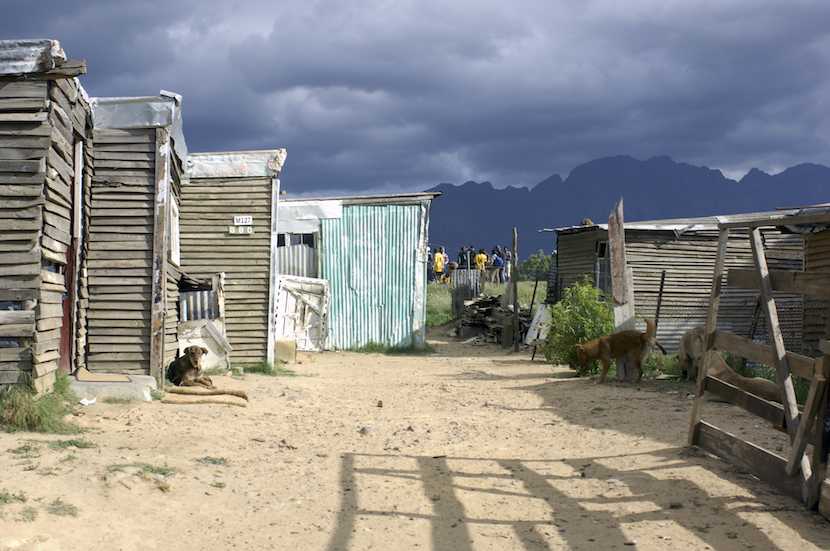 Following the tempestuous July riots, township areas have been put under the magnifying glass by the Economic Development Department (EDD) after being disregarded for many years. BizNews founder Alec Hogg spoke to the Chief Executive of the North West Chamber of Commerce, Andre Coertzen, and Professor of Economics and Management Science, Ronnie Lotriet about the findings of their 46-page report on the economic state of townships and “klein-dorpies’ in the North West area as commissioned by the EDD.  The two relayed their experiences with a focus on the sentiment that there are not enough regulation methods in place for small businesses in these township areas. — Misha Samuels

On the state of small businesses in township areas:

It’s still apartheid of some sort because almost none of these township businesses are integrated in any way through the mainstream economy. I was taken aback by that. We had about 120 interviews, I think 102 of them were valid. [The Township Economy is] in the hands of foreigners. That was quite astonishing by a big margin. I think something like 61% is foreign-owned. What’s even more [shocking] for authorities is the fact that in these foreign-owned township businesses, there is no transfer of skills. Look, I’m always happy to say — and it’s not anti-foreigners — I’m always happy to see these guys come [and] they bring some skills. The problem is, no transfer of skill happens [because] they employ their own families. What was also very interesting is that no value is added in the process of selling already provided goods.

On small business ownership in these townships:

“Here’s a guy from Bangladesh who doesn’t have a job. [They ask him], “Why did you come to South Africa?” And they say [because of] the job opportunities. We know there is no such thing. Where does he get R10 000 for a plane ticket to come t0 South Africa? That’s my first question. My second question is — and I asked this of the DG of Home Affairs — how many Pakistanis are in South Africa?  He said he doesn’t know. I don’t know whether you remember, a while back, they caught a woman at the South African Embassy in Windhoek, issuing a thousand [illegal] visas to Pakistanis. The whole industry is run by the Chinese mafia. That’s what I call them because they bring these people in and these people work for them. They stay in that little spaza shop and their money is taken. They get R500 to live off and the rest [is] presumably sent to [their] family. That’s what they say. But behind all this is the Chinese mafia. Unfortunately, that’s the truth. I can take you there. You will see, because if you ask them who owns this shop, they say their boss. [Often] the boss is a guy from Johannesburg. The product comes from Johannesburg, Unfortunately, these guys [the spaza shop owners] are controlled by the Chinese mafia.

The Township Economy has been captured by foreigners. These guys are operating [in] a closed economy of their own. The money is repatriated on a very, very, very regular basis, either to Gauteng or overseas. The reason for that is the looting and [everything] that has happened in the past. It’s also a safety precaution and one of the [main] concerns, irrespective of your nationality, is obviously security and safety for all these small and my group businesses.

On regulation of small businesses:

I went to the Gauteng government with this report. [You may] remember earlier in the year, I think it was Parks Tau who said that they are going to [impose] regulations on small businesses. That is what we told them. Even if you sell potatoes on the street corner, you have to be registered somewhere. Not just pay for a licence. You must have a document in your hand that is renewable once a year. If we go in that way, we might [be able to] pick up who is illegally in the country. Our problem is that nobody is registered. How do we police that? We need to have people who won’t take bribes.

Unfortunately, there’s also a big industry where they make driver’s licences, ID cards and passports. You can buy it in Johannesburg. The regulation will have to come in and it must be policed. I’m not an economist, but [foreign small business owners] do not contribute anything to our GDP. And as the professor said, there is no skilled staff. What are they doing here? They use our medical facilities for free and they are treated like any other [person] who lives in South Africa. We are going to try and start a crusade. And I’m not xenophobic, but [we need to] have better control on who’s living in our country.

Where do you start with small business regulation?

Well, I would immediately regulate small businesses. And by that, I mean, register them so that I know exactly who’s doing what. We need to train law enforcement or get trained people to police this initiative. If we don’t turn this around, it’s going to be chaos. The other thing is, I’m concerned that people who sit in the Union Buildings and in Cape Town — I’m talking about all the political parties now — they want to make laws but they don’t know what’s going on, on the ground. That’s where this research came from. It is too easy for any foreigner to come to South Africa on a holiday visa and to stay here. They never go back [and] it’s not policed. I come from Namibia originally. I cannot go and work there now. I [must] have a work permit. But do you know how many Namibians are working in the South African government as secretaries and things like that? It’s unreal. We must start somewhere else. We have to do something at the grassroots level.