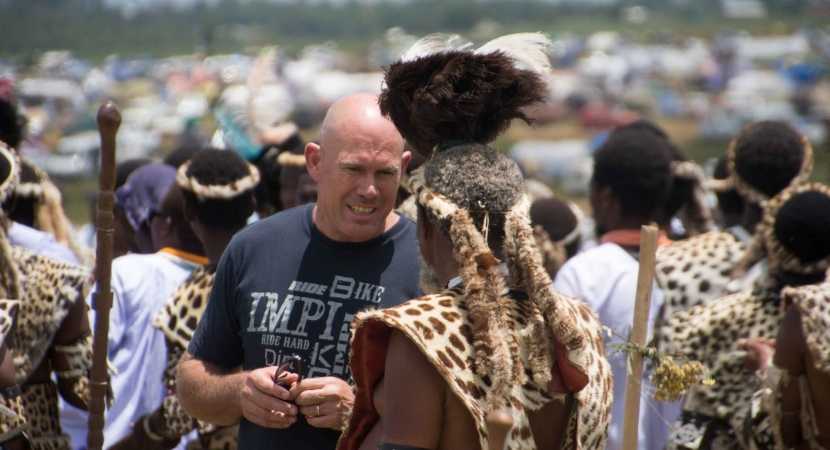 Author, speaker, and businessman GG Alcock was raised in a mud hut in one of the most poverty-stricken and violent parts of KwaZulu-Natal – Msinga. Brought up in a Zulu community with no running water, electricity, or modern conveniences, Alcock is fluent in Zulu and has an intimate knowledge of the Zulu culture. He joined the BizNews team at the spring BizNews Investment Conference to shed more light on the social unrest which took place in early July. Alcock has previously said he does not believe the looting was carried out by the poor and unemployed. In this excerpt, he appeals to the business community to help elevate and invest in businesses in the informal sector because that’s where the opportunities lie. “I don’t believe in charity. I don’t believe in employing unemployed people because they’re unemployable. I believe in the fact that if the people are doing something out there, even if it’s selling snacks to school kids, those are the people we should be working with or employing,” he says. Listen to his interview below. – Claire Badenhorst

GG Alcock on the Zulu culture:

I met a Malawian guy who spoke very good Zulu. I said, you speak good Zulu. He said, you know, you have to do this if you’re not Zulu. He said, it’s like if you have a dog, you don’t learn how to bark. The dog must learn – come here, go there, sit down. He says Zulus are like that – they think the rest of people are dogs. They must learn how to do that. They won’t learn how to bark, and I think that’s very true and it is true of that. It’s a very patriarchal society; a very proud society. So there’s a positive side to it. But the negative side to that is almost, you know, looking down on the rest of the tribes. There’s a lot to it but it’s a very cultural thing as well. You know, Zulus are taught, men are this and it’s in many ways a very violent and aggressive society.

Zulus always chose to be in certain sectors. So they were in the mines, for instance, in Kimberley and one of the reasons they did that is that the chiefs and kings sent them to Kimberley. Go and mine and get guns. So that’s well-documented that they were used to go and work in the mines in Kimberley, but they primarily chose the construction sectors and the security sectors and the security guys were primarily always Zulu. There was always a Zulu joke that if you crossed a Jew and a Zulu, you would get a security guard who owned the building. So Zulus always were in those specific sectors and what they did is they got jobs for each other within those sectors, so they ended up almost dominating those sectors.

On why the looting took place (especially of a blood bank):

So I think there were two parts to that. The first was collateral damage. People were going to the mall or from the mall, spaza shops, and so on, and they did that. But that doesn’t reflect on a surgery or something. There were very specific decisions to go out and create maximum impact. That is not the actions of someone who is poor – it is a deliberate act. The Twitter handle or WhatsApp handle, the lady who was just arrested is Sphithiphithi – Sphithiphithi means create maximum chaos. You know, if there’s Sphithiphithi, there’s chaos and confusion. It wasn’t about empowerment, it wasn’t about enrichment, it was about creating.

So I believe that within the groups who were looting the bottle stores, whatever – those were the people who were just helping themselves – but there were specific people. Target that mall and within that mall target these spaces – which was creating maximum confusion. And I would say that that was no mistake. They weren’t walking down the road. They were like, in this area, there’s that place and that place and that place. In the ’80s and late ’70s, you found that there were certain people who were seen as either collaborators or business people who were then targeted by the ANC or whatever at the time and this is similar – that actually you’re benefiting from the system, we’re going to create confusion.

On why businesses should invest in the informal sector:

First of all, I believe in passion-fueled optimism. I think we have to look at our society and our country differently and more optimistically and look through the bad news stories and actually have a more balanced- if it’s not optimism, at least have a more balanced view and an informed view, particularly based on data and insights and real information. As business people, I am startled by how little information people have about these spaces that are there. I’m not saying across the board – Transaction Capital is an extraordinary business involved in the taxi industry, and they finance taxis based on an understanding of how profitable a route is, not on someone’s books and so on. So let’s understand the society more and as a business sector, look at where the opportunities lie.

I also think, most importantly, there’s a massive opportunity to do business with this sector in reciprocal business relationships or aggregation models and so on. You know, there’s a massive opportunity for financing these businesses. I sold my business in this space and [I’m] investing in a number of these kind of businesses because I think these are the real opportunities. The unicorns, if they are or even if they [are] just horses, you know, this is where the space is. There’s opportunities for financing, there’s opportunities for supply, there’s opportunities, you know, in a range of different spaces here, in technology and so on. I can’t go into too much detail about it now, but I believe that we can really transform this sector. The R2.5bn cheese slice is an example. You know, there’s an opportunity and part of that business was built around growing quarter outlets as well as selling cheese slices. So if we look at the sector differently, there are massive opportunities to make money as a business person, but at the same time, to elevate those guys. I think there’s a multitude of different ways which we can support these businesses. We have to change our mindset, though, because there are no guarantees in these spaces. As much as there’s no guarantee when you invested in PayPal or you invested in Tesla or invested in whatever business. The formal space is flatlining and this space is emerging, and once you see a bandwagon, it’s too late. You know, right now is the time we should be investing and looking at innovative ways of involving ourselves in that sector.

I don’t believe in charity. I don’t believe in employing unemployed people because they’re unemployable. I believe in the fact that if the people are doing something out there, even if it’s selling snacks to school kids, those are the people we should be working with or employing. If someone’s genuinely unemployed in this country, they’re unemployable. I can tell you that; I’ve tried this exercise. Don’t try and create jobs for that. Maybe a youth leaving school is different, but if you find someone who’s doing some sort of little activity, some hustle, renting a backroom or whatever, those are the people who there’s opportunities [for] and they are denied opportunities to grow those businesses because they don’t have access to capital, technology, training, and enablement of various ways. So if we look at that and we build business models that adapt to that, there are huge opportunities to make millions and millions of rands and at the same time, elevate those businesses.