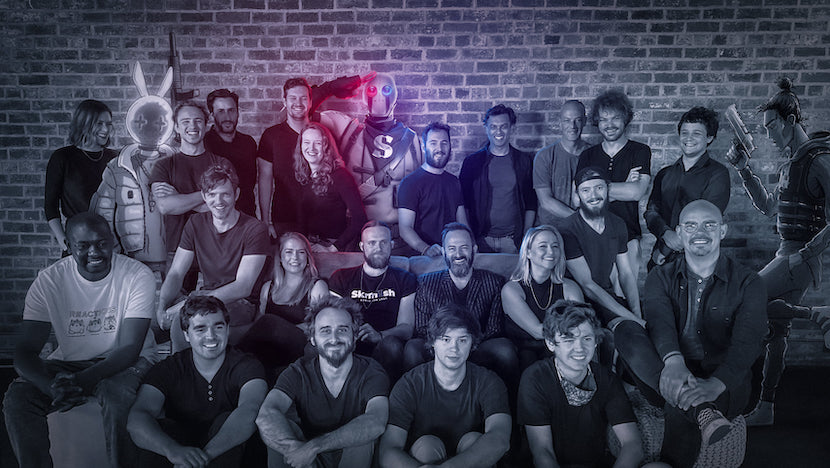 Skrmiish is a third-party competitive gaming app that enables users to wager against one another in competitive online games such as Fortnite and Call of Duty. Founders Chris Heaton and Roland Reed set out to pioneer a crypto-based competitive gaming market and to democratise the already established e-sports industry. Heaton spoke to BizNews and said he started gaining interest in the competitive gaming industry after seeing his son play Fortnite. The development team is based in Cape Town and consists of a small yet powerful group of programmers and IT specialists. Skrmiish CEO Luke Grob clarified in an interview with BizNews that users wagering on their matches was in no way gambling and the reason they are able to operate is because of this distinction between wagering in skill-based matches and regular gambling. Heaton supported this statement by making the distinction between regular gambling, which relies on luck and the wagering mechanic that relies on the user/player’s skill. As a result, Skrmiish provides its users with the option to wager actual money or cash while avoiding breaking any laws in South Africa. There are over 500 million competitive gamers across the world and with the bulk of monetisation being driven to the very best players, Skrmiish seeks to monetise competitive gaming at all skill levels. A large influence in the structure of the app comes from the online poker world. Heaton and the development team mirrored the structure and cadence of the online poker world. Even though the idea is to wager currency, minors will be restricted from wagering actual cash. The South African-based team has been able to develop and launch its own layer-2 bitcoin cryptocurrency wallet, which allows its users to safely and efficiently receive earnings from their matches. So far, there has been over R1m in-game currency wagered since the app’s founding in 2018. To start wagering against other players, you must join a leaderboard. Leaderboards work with the app’s in-game currency called ‘LP’ with  no real value. The player with the most LP at the end of the tournament is declared the winner. Another thing that makes Skrmiish stand out even more is it deviates from the competitive gaming industry standard by having most of the participants in a tournament or leaderboard receive a portion of the prize pool instead of only the top three players. In-app transactions and payments are made through PayPal or wire transfers. Owing to its payment solution, Skrmiish enables high-frequency and low-latency transactions that are low cost and fast. Skrmiish encourages its users to make sure their Skrmiish names are identical to their EpicID. Currently, there are plans to introduce actual cryptocurrency into the app. This will allow users to receive cash prizes that will be called Skrmiish Coin and have a 1:1 value with the US dollar. The team plans to introduce a feature where users place wagers against the house/app that has the potential to further entrench itself into the competitive gaming industry. Heaton pointed out that Skrmiish is expected to see even more success as it moves forward thanks to its intended inclusion of other titles in its library such as Call of Duty and League of Legends. – Ryan de Villiers

Hot new gaming tech startup, Skrmiish, has successfully built and launched an app that not only disrupts the structured esports industry, but has also developed its own unique Layer-2 Bitcoin cryptocurrency digital wallet in conjunction with FCA regulated CoinMode.

Founded in 2018 by entrepreneurs Chris Heaton and Roland Reed with the idea of democratising the world of esports, Skrmiish, in a very short space of time has built an incredible South African team to develop its proprietary skill-based mobile platform. Skrmiish enables gamers, brands, teams, streamers and communities to compete against each other for cash on the world’s most popular video game titles such as Fortnite, Call of Duty, Battlefield, League of Legends and others.

Think online poker, but much, much bigger. There are an estimated 100-million poker players in the world, but over 3-billion people play video games. Approximately 250-billion matches are played every year with a real lack of inclusive competitive opportunities that stimulate revenue for the casual gamer or streamer which makes up the vast majority of the market. This space is currently exclusively occupied by the pros and ‘million-dollar’ streamers.

There are currently more than 500-million competitive gamers in the world. Skrmiish targets this massive emerging competitive gaming industry and allows any skill level player to create and monetise their own competitive experiences, even driving significant revenue from global crowd funded prize pool matches. The tech is game title agnostic and targets all competitive game formats across PC, console and mobile, utilising peer-to-peer cash matchmaking, Leaderboard-as-a-Service (LaaS) and play-to-earn revenue models – every match played is an opportunity for Skrmiish to monetise.

Gaming on the blockchain

A study by Worldwide Asset eXchange claimed that over 75% of online gamers wanted to exchange their virtual assets for a currency that would be used across multiple platforms. Cryptocurrencies and blockchain technology turn this capability on for the first time ever.

Skrmiish is the world’s first app that allows any user to compete and monetise their experience on the blockchain. Currently in week 10 of global beta testing, Skrmiish has had over 20,000 downloads, with over a million in in-app currency wagered. Once the crypto-based digital wallet is introduced to the app in November 2021, it will unleash the full global commercial potential of the tech.

The crypto gaming industry is drawing a lot of attention – in the first half of 2021 alone, venture capitalists invested around $17-billion dollars in crypto-based assets, tripling the 2020 figures. The blockchain industry recorded 1.54-million unique active wallets daily – an increase of 25% over last quarter and a 509% year-over-year increase. Around 50% of these wallets interacted with blockchain-based games during Q3.

The play-to-earn, monster-battling, non-fungible token (NFT) game, Axie infinity, recently became the most traded NFT collection ever in Q3 2021, generating over $2.5bn in trading volume. This while the game also created $800-million in revenue during that quarter.

Skrmiish has already generated incredible support from global competitive gaming communities. Fans of big name streamers from across the globe such as Loserfruit, Vohlii, Tyler and Olten, as well as the communities of FNCS SCRIMS, Xen, Elite Creative and The Daily Defaults have all run a multitude of successful events on the app.

While the thriving online poker industry is only valued at $60-billion, the competitive gaming market is currently valued at $170-bn, and is expected to reach $218bn in the next two years. The skills-based gaming industry is already making up $10-billion of that value alone. And even with these booming figures, it is still believed that the online competitive gaming economy is still in its infancy. Crypto-based digital wallets, NFT’s and crypto-gaming are set to push the industry to its next level.

Skrmiish is primed to become an incredible success over the coming months as it onboards multiple game titles and switches on its revenue mechanics.