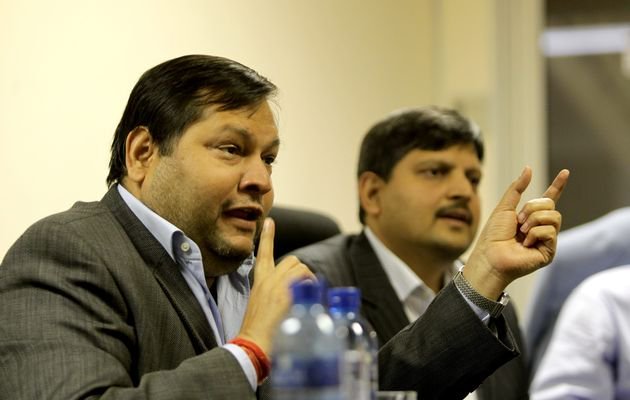 To answer my own rhetorical question in the headline…no, I can honestly say I didn’t see Atul and Rajesh Gupta being arrested.

At 8.10pm on Monday, South Africa’s Ministry of Justice and Correctional Services released a veritable bombshell. It confirmed, “it has received information from law enforcement authorities in the United Arab Emirates (UAE) that fugitives of justice, namely Rajesh [AKA Tony] and Atul Gupta have been arrested.”

Hundreds of billions of rands were spirited out of this country – through the state capture project – destined for the overseas money laundering network of the Gupta’s empire. By some estimates Jacob Zuma and his mates cost us, the taxpayer, up to R2trn. With that sort of loot clogging up their bank accounts, I’m shocked the Guptas hadn’t greased every single palm between Durban, Delhi and Dubai to make sure their arrests never happen.

What good is all that money if it can’t stop you from being arrested? At some point, it seems, in very much the way they treated it, that cash just turned into Monopoly money. Nice to have while you’re playing the game, but useless when you step away from the board.

Perhaps South African authorities had exerted enough pressure on their UAE counterparts to act against the hoodlums hiding out in their backyard. Perhaps the Guptas got restless and tried to travel, being nabbed by Interpol at Dubai International. Perhaps one of those darn Guptas – seemingly untouchable in this world – just made one wrong move or rubbed some unbribable official up the wrong way. I’m sure we’ll know soon enough.

For now, two Gupta brothers, minus Ajay, the eldest of the trio, are presumably in custody in the UAE and will no doubt seek bail. The statement from South Africa’s Justice Department adds: “Discussions between various law enforcement agencies in the UAE and South Africa on the way forward are ongoing.”

What’s the next step?

The way forward must surely refer to extradition proceedings from the UAE. But you can bet your last Krugerrand that the Guptas are going to fight like hell to never set foot in this country again. They fled South Africa in February 2018 and haven’t been back since. The State Capture Inquiry tried and failed to secure their presence to testify at the commission.

On 8 September 2018, the Guptas communicated, through their legal representative Mike Hellens, SC, that: “Their attitude is that they will not come to South Africa to appear in this forum at this place at all. However, they will appear in person before the commission, at another place, which can be agreed upon with the commission, live in person before you, with the evidence leaders to cross examine them. And they undertake to give evidence there. Alternatively by such video link you deem appropriate.”

The inquiry chairperson Raymond Zondo denied that rather audacious request from the Guptas.

Just last week, BizNews spoke to the National Prosecuting Authority’s Investigating Directorate (ID) spokesperson, Sindisiwe Seboka, about attempts to get SA’s most slippery characters back here to face the music.

“We got the Red Notices issued by Interpol in February this year [2022]. We had initially requested for eight people who are currently out of the country. Four Indian nationals, who are ‘business persons’ for the various companies in which the [Gupta’s] money was laundered. The two Gupta wives and the two brothers. We don’t have anything on the other Gupta brother [Ajay].

“Interpol has granted us six Red Notices. The first four were granted last year already. The last two of the Guptas was granted in February this year. Interpol has started its work of talking to various member states across the globe to ascertain where they are in the world. They [Interpol] have gotten some responses, however, they’re playing their cards very close to their chest,” said Seboka.

[To listen to the recent interview with the NPA’s ID spokesperson, click here.]

What are they charged with?

The Guptas had their tentacles in almost every orifice of the state. From Transnet to Eskom, Denel to the SABC, the politically protected and connected family acted with impunity to funnel contracts to their business entities. Often they did sweet nothing to earn any of it. Much like the infamous gangster Al Capone who was finally nabbed on mere tax evasion charges, the Gupta’s arrest is predicated on a case that pales in comparison to what they’re accused of in the grand scheme of things.

Forensic Investigator Paul O’Sullivan told BizNews last year, “I’ve always said that if you have to go after somebody, go for the low-hanging fruit and not necessarily everything that they’ve done…go for something that’s easy to prove.”

They’re facing fraud and money laundering charges connected to a feasibility study that preceded the failed Estina dairy project in the Free State. Gupta acolyte Iqbal Sharma received R24.9m from the Free State Agriculture Department to do the study, but outsourced it to Deloitte for R1.5m. Sharma then paid over R21m to Islandsite Investments that was owned by Atul and Rajesh and their wives.

The case is scheduled to be heard between January and March next year.

Shortly after the news broke, the Organisation Undoing Tax Abuse (OUTA) said in a statement that securing their extradition is now the next hurdle.

“We’ve always said that fighting corruption in SA requires resilience. That if the rule of law is allowed to take its course, those implicated will eventually get their day in court. It seems like that day is around the corner for the Gupta kingpins,” said Stefanie Fick, OUTA’s Executive Head of Accountability.

BizNews also recently spoke to Rudie Heyneke, OUTA’s lead investigator on state capture matters about what appears to be some small wins for accountability as arrests are finally starting to snowball.

“It put an end to rumours about the Gupta family’s whereabouts, and with their arrest out of the way, we’re hoping that more arrests and swift prosecutions will follow,” said Heyneke.

[To listen to the recent interview with Heyneke click here.]

The Kathrada Foundation put succinctly in a tweet that it’s, “Glad that the arm of the law is reaching out”.

Herman Mashaba, leader of ActionSA wrote on Facebook, “At long last! You can run in life, but you cannot hide. I have so much gratitude for everyone involved.”

The Defend Our Democracy campaign – established by a number of ANC veterans including Cheryl Carolus and Mavuso Msimang – wrote: “If the Gupta brothers are to be extradited to SA to face charges, this would be an important victory for the many civil society organisations and ordinary citizens who have called for justice and accountability.”

The cynics out there – not to say I’m not one of them on most days of the week – are clamouring to point out that this is all somehow some elaborate diversion tactic employed by President Cyril Ramaphosa. As questions about millions of dollars in cash allegedly stuffed in furniture at his Limpopo home abound, I’m sure the momentary shift of our collective focus to the UAE is welcome for our beleaguered head of state. But did he somehow engineer this? I think not. Does he stand to benefit from it? Of course. He’s seeking a second term in December so he’ll be sure to blow the “I’m-tough-on-corruption” trumpet should the Guptas eventually be extradited to stand trial.

This is a small but not insignificant moment. For a country starved of accountability after decades of impunity and rampant criminality – much which still persists today – this is a moment to savour. I’m eschewing my usual scepticism and opting instead to believe we could possibly – in the not too distant future – see Guptas in cuffs on home soil.