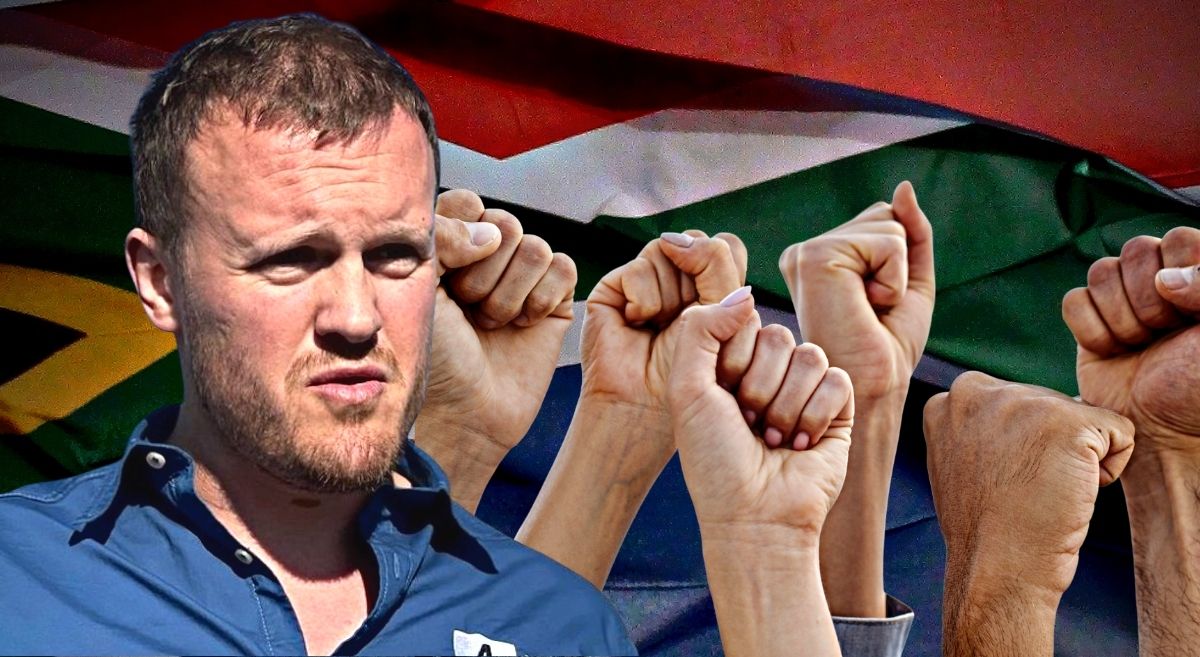 Community policing activist Ian Cameron – who heads up NGO Action Society – made headlines this week when cops ejected him from a community meeting in Gugulethu after a war of words with Police Minister Bheki Cele. Cameron told BizNews he was the 13th speaker at the event where he proceeded to tell the minister about the reality of crime and gender-based violence in the area. Cameron said: “I’m tired of the excuses and I’m tired of you making this a political thing. I want to graciously invite you to come and patrol without a bodyguard, without a grand car, in normal clothes with this community tonight to get the sewage on your shoes that they patrol through.”

The minister warned Cameron not to provoke him. “You regard me as a garden boy,” Cele said. When Cameron defended himself from the racial assertion, Cele yelled at him to, “Shut up,” several times and sit down. “It’s your turn to listen, young man or get out,” shouted Cele. Cameron has laid a complaint with the Independent Police Investigative Directorate regarding  police conduct, as well as criminal charges against the officers who attempted to assault him.

Videos of the incident went viral on multiple social media platforms, prompting Lirandzu Themba, spokesperson for the Ministry of Police, to make a statement on Twitter.

In less than two days, Michael Appel’s interview with Ian Cameron (published on BizNews TV on Youtube) went viral, with well over 84,000 views and around 550 comments on YouTube – figures which continue to climb.

We took to social media to see what BizNews community members had to say about Ian Cameron’s unyielding activism and refusal to cower to Police Minister Bheki Cele.

One community member, Raj Bhoopchand,  made comical use of memes to illustrate his feelings towards Cele and his leadership.

A Hero vs a Coward!

The BizNews interview with Cameron included several clips of footage taken at the event, from Cele shouting at Cameron to “shut up” to Cameron being forcibly removed, not ‘escorted’, from the building. Many community members responded to this pitting of Cele and Cameron against one another by drawing significant distinctions between Cameron, and Cele and the ANC cadres he works with.

Thutuka Veli commented, “They can’t handle the truth. That’s politicians for you… Keep doing the good work…” while Colin Thomas said, “What a champion, certainly made Cele look like the incompetent fool he really is!”

Mr Tarrentaal commented, “Bheki Cele is an incompetent baffoon. Well done Ian Cameron. Stand up and keep fighting the good fight! The Police abused you and did not apply minimum force correctly. I hope you are able to take them on legally about their abuse of power.”

RUST GS RIDER directly compared the respective characters of Cameron and Cele when he said, “Ian will always be a legend and Bheki will always be remembered for abusing his incompetent power.”

“Respect, Ian. You are a brave man. Cele is an absolute coward. We live in a country of fools so bloated by their sense of victimhood that they are now blind to their corruption and lust for power. It is amazing that Cele gloats about his struggle credentials and then, when Ian protests for good reason, Cele has him violently removed. The irony is painful,” said Aim High.

Naturally, while the majority of comments on social media platforms praised Cameron, there was a handful of community members who disagreed with the general consensus.

Yoliswa Mbebe said, “Ian is plain rude!! As if we don’t have enough youngsters who are rude and violent towards their parents and even in schools, this clown Ian is doing this on a public platform!!! Nxa!”

Cameron’s resolute stance caused some community members to fear for his safety.

Andre Vandenberg commented, “I am SO worried about YOUR safety. True, facts are facts, BUT, PLEASE be on your “toes”, and KEEP a watchful eye 360 degrees around you.”

One of the most common sentiments expressed by community members was that Cameron is a legend and a hero and that South Africa needs more people like him.

Sarish Ramlall asked, “Why aren’t you the Police Minister?” “I will definitely vote for you for Minister of Police,” Wonda Jonk agreed enthusiastically.

What are your thoughts on community policing activist Ian Cameron and his resolute refusal to cower to Bheki Cele? Share your views below.