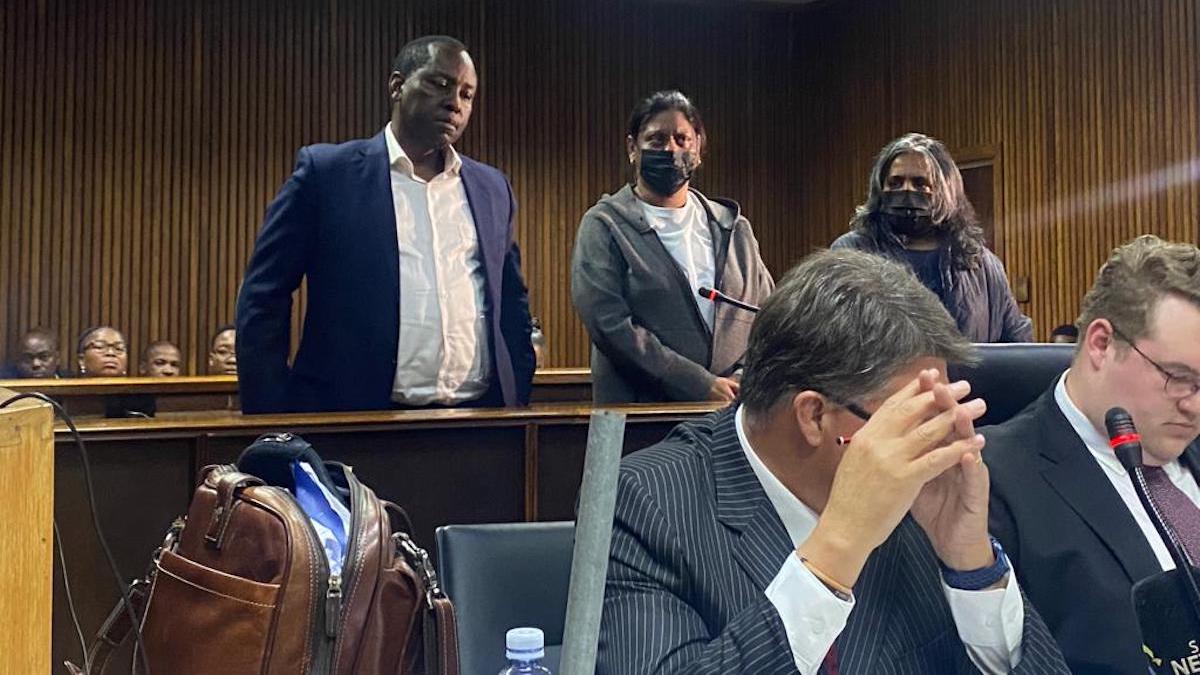 Mosebenzi Zwane is one of 16 accused in the state’s case against a coterie of Gupta acolytes and hangers-on.

It’s the state versus seven individuals and nine companies. Among them, the former MEC (also former minister) Zwane, the former head of department Peter Thabethe, the former CFO Seipati Dhlamini, and former chief director Takisi Masiteng, all from within the Free State Agriculture Department. Zwane was arrested in late September this year and released on R10,000 bail.

They are facing a host of charges including contravening the public finance management act, fraud, corruption and money laundering. The matter was postponed to 25 January 2023 and has been transferred to the Bloemfontein High Court.

On Wednesday, the state furnished the accused with a 216-page indictment. Think of it as a formal charge sheet summarising the case the accused will be expected to answer to. It’s part of disclosure so the prosecution doesn’t spring any surprises on the defence team. They now have it and must build a defence against the charges.

Scene of the crime

The scene of the crime is a small town in the Free State called Vrede. Over the years I’ve travelled to this tiny agri-outcrop many times to meet with the locals in the hope of better understanding the betrayal and injustice perpetrated on the poor by those who were supposed to ‘empower’ them.

Following one of my visits to speak to Philemon Ngwenya – one of about 100 intended beneficiaries of the project – he was found murdered. I had put the man on television where he had proceeded to name Zwane and former Free State premier (now suspended ANC secretary-general) Ace Magashule as having sold them a pipedream. He was disappointed and angry. Not long after he was stabbed to death and wrapped in a blanket.

Of course, police investigations turned up nought. No one was ever able to link Ngwenya’s suspicious murder to his outspoken calls for justice in the wake of the R280m looting scandal that left the poor even more destitute than before.

Use of intended beneficiaries as a front

You see, the intended beneficiaries were supposed to be 51% shareholders in this deal between Estina and the Free State Agriculture Department. The idea was to establish a dairy farm and milk-processing plant in the area. Great in theory. The execution, however, saw Estina – through its frontman Kamal Vasram, a guy who worked retail for the Guptas’ Sahara Computers – being paid R280m between July 2012 and May 2016.

It was supposed to be a public/private partnership, which would see over half a billion rand pumped into the venture, with R228m meant to come from Estina as the implementing agent itself, and the rest from the government. It’s important to note there was never any feasibility study done on the project, no business plan, no environmental impact assessment, no water rights, no competitive tender process followed, and the venture was not budgeted for.

When a feasibility study was eventually done, Gupta acolyte Iqbal Sharma – through his company Nulane Investments – was paid R25m to do it. Sharma subcontracted to Deloitte for R1.5m and redirected the rest of the money to a host of Gupta-linked companies including Islandsite Investments (accused 13 in this case). It’s in connection with this case of fraud and money laundering that Atul and Rajesh Gupta were arrested in Dubai in early June this year. Justice Minister Ronald Lamola recently confirmed the Guptas remain behind bars in Dubai awaiting the outcome of South Africa’s extradition application.

Interestingly, the Guptas even had a South Korean involved in this whole Estina saga. Her name is Soo Young Jeon. She became the sole signatory on Estina’s FNB bank account after Vasram. The Free State Agriculture Department made eight payments to Estina in total. Six of them were when Vasram was at the helm, and a further two when Jeon took over.

Vasram was supposed to run the dairy but wasn’t a farmer by any stretch of the imagination. A lot of cows died. Also, while Zwane might have claimed the project was “100% black-owned”, there wasn’t a single intended beneficiary involved as they were promised. They were even barred entry to the premises of the farm. Their names and ID numbers were taken at community meetings chaired by Zwane and others. They were to be the majority shareholders but it was all a facade from the start.

To understand the Estina matter in its simplest form, the indictment summarises it in this way. Estina was a front company used by the Guptas and their associates to “extract public funds from the department for their benefit. A portion of the funds that the department contributed towards the Vrede Dairy Project was laundered by Estina through various bank accounts and was ultimately distributed to companies owned by members of the Gupta family and or to their associates in the United Arab Emirates.”

Zwane in the crosshairs

The National Prosecuting Authority (NPA) contends Zwane committed “acts of corruption” in getting the department to conclude the deal with Estina. The state will also seek to prove there was corruption involved in the funding of the unbudgeted project, regarding the eight payments made to Estina, and in the provision of rent-free land to the scheme.

As for the other government functionaries listed as accused. They all failed in their respective duties to ensure there was a transparent tender process, any value for money, or any oversight and accountability for the millions simply handed over to Estina (and by extension the Guptas). Also, it’s unfathomable that zero due diligence was done on Estina. It’s a shelf company that had R16 in its bank account days before the first prepayment of R30m from Free State coffers landed in its account.

The NPA’s Investigating Directorate national spokesperson Sindisiwe Seboka says: “In terms of the agreement, Estina was to provide a capital injection of R228m. Paras Dairy (a company incorporated in India) was presented as Estina’s partner in the Vrede Dairy Project.

“The agreement further stipulated that the department was to contribute R342m including VAT over a period of three years. Investigations also revealed that no proper tender procedures were followed with regards the decision to fund the proposed Vrede Dairy Project. Estina did not adhere to its obligations in terms of the agreement as only the department paid its contribution into bank accounts held by Estina.”

This case is significant in that it is the first time a former member of cabinet finds himself in the dock, even if it is in his former capacity as an MEC.

No Ace in the deck

Curiously, Magashule is not among the accused in the Estina matter, even though he was the highest executive authority in the province at the time. Also, he is or was unapologetically close to the Guptas.

Chief Justice Raymond Zondo said in his report on Estina he believes Magashule should be hauled over the coals.

“The premier should have performed his oversight function over the MEC, Mr Zwane, and the HOD [Thabethe] but failed dismally […] Mr Ace Magashule also failed dismally to supervise his MECs and now we see the same failure in respect of the Vrede Dairy Project. It is necessary that there be consequences for people who fail to do their job.

“Otherwise, this corruption and these acts of state capture are going to continue forever to the detriment of the country and all people,” wrote Zondo.

But Magsahule is, of course, already in court related to the ‘asbestos audit heist’. Actually, many of the protagonists of the Gupta’s schemes and plots are before the courts. But, hold not your breath, dear reader, there are sure to be a plethora of exhaustive postponements and delays. I wonder where they learnt that?