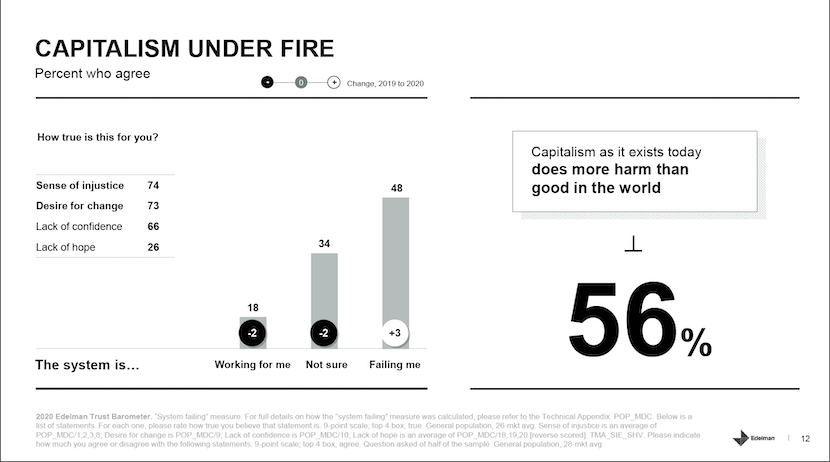 For many WEF attendees, the most eagerly awaited event of the Davos week is the annual unveiling of the Edelman Trust Barometer, a 20 year old thermometer of how citizens in 28 countries perceive Governments, Business, the Media and NGOs. As in recent years, trust in institutions continues to decline and in some cases has reached crisis levels. Including in South Africa where the survey found Ramaphosa’s Government is trusted by a mere 20%. But there’s also good news. Stakeholder capitalism, which has been entrenched in Japan for a quarter century, is being embraced. And as the president of a trillion dollar multinational explained, although seemingly under siege right now, democratic societies will adjust to the new reality – as they have done during similar transformational periods in the past. – Alec Hogg

For more years that I care to remember, before dawn on Tuesday of Davos week my bundled up body trudged through the ice and snow to guarantee a decent seat for the unveiling of the latest Edelman Trust Barometer. Temperature-wise 7am in Davos in January is practically the middle of the night. But this is one sacrifice happily made. For me – and many others – the event was always the highlight of the whole WEF week.

The Edelman Trust Barometer is the gold standard for measuring how much ordinary folk trust around the world – or distrust – their governments, business, the media and NGOs. The report consolidates results from 34 000 respondents in 28 countries – Kenya was added this year – or around 1,150 in each market.

South Africa has been included in the barometer for some years. It has fared poorly in recent times, ranking worst for trust in Government, a position it fell into during the Zuma era and continues to occupy.

That drags down the country’s overall score to a net 44%, with South Africans among 15 nations whose mass population, on average, don’t trust the system. It scores slighly less than the US, at 45% but ahead of Ireland, France, Japan, Spain and the bottom two, the UK at 39% and Russia at just 27%.

But there was a welcome surprise. South Africa, so long castigated by as having the world’s worst Gini-coefficient, ie income inequality, actually scores pretty relatively well in the real world. The difference between the way its graduates, higher earners and media junkies see things – what Edelman terms the informed public – is pretty close to how the rest of its society views the world. South Africa’s score on this great division between the elites and the rest is a third of the UK’s, a fifth of Australia’s.

Even more encouraging, the Edelman’s Trust Barometer shows SA was one of only two countries surveyed where economic optimism actually improved in the past year. A healthy  57% of South Africans now believe they will be better off in five years’ time. For context, only 15% of Japanese feel the same, 19% French, 27% British and 32% of the Australians. 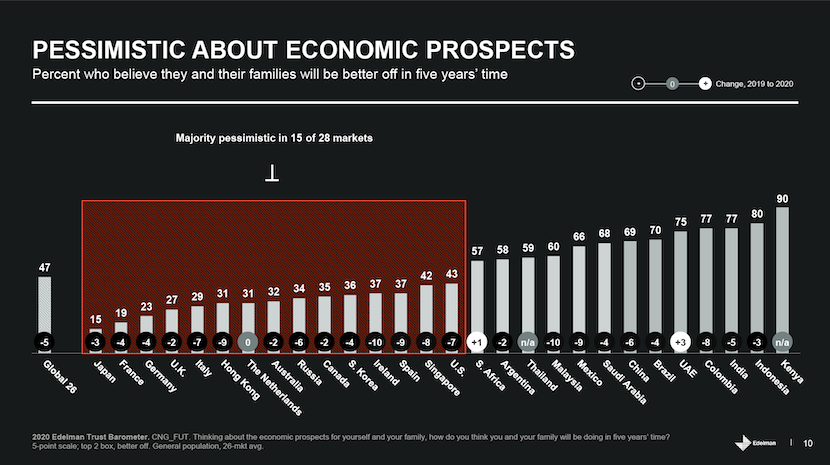 South Africans share a poor global perception of the news providers with only 40% trusting the media. 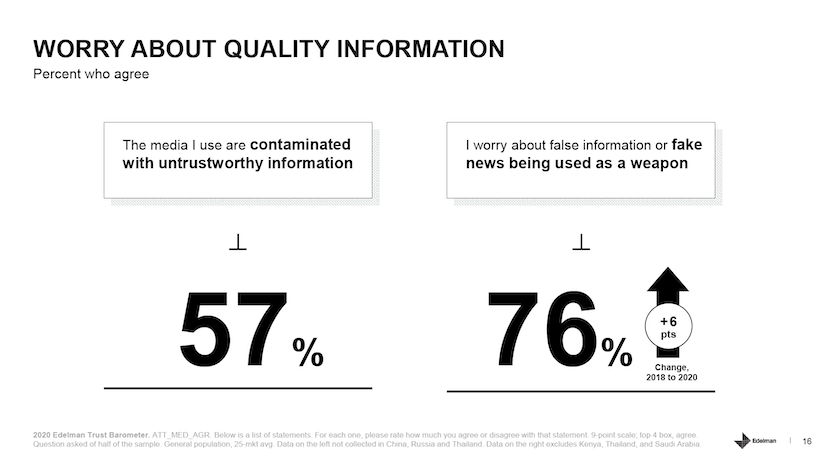 But even with only 40% of South Africans trusting the media, that’s still double those who trust the Government, an area where the country continues to prop up the global table with an appalling 20% approval rating. And we’re at the bottom by miles. Spain comes second last at 30% with even Donald Trump’s America at 39%. Citizens of China, where 90% trust their Government, and India at 81% seem to live in a different universe. 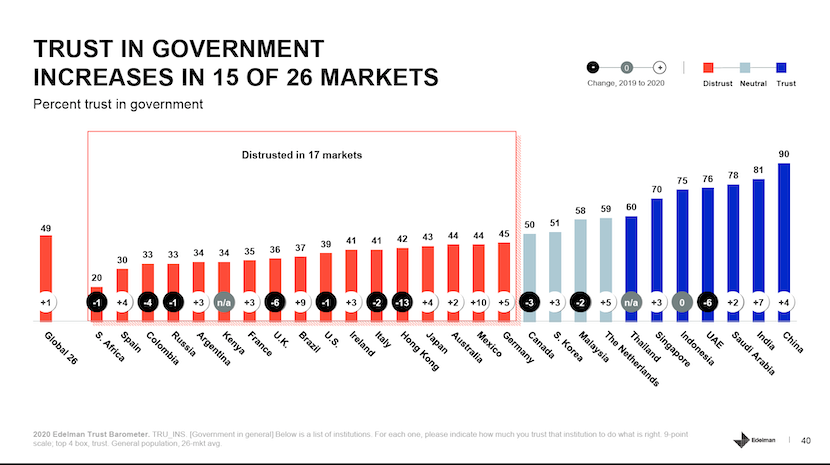 South Africa’s business and NGO sectors scored considerably better, both in the upper half of the global table, with their trust levels at 58% and 59% respectively. 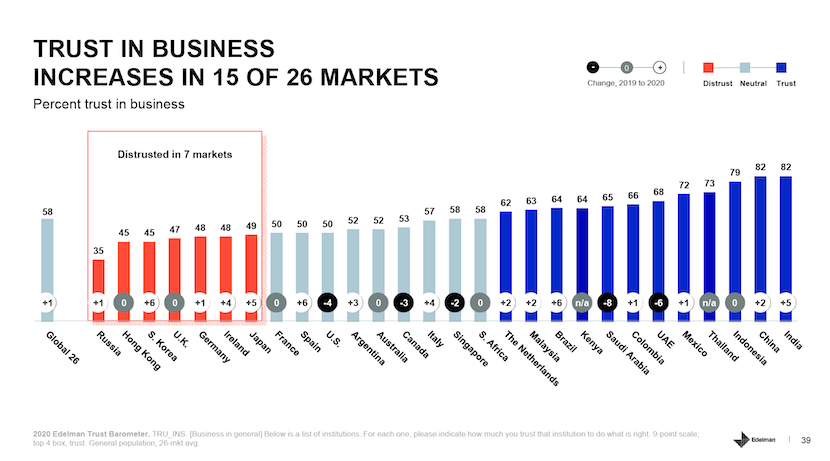 The 2020 Edelman Trust Barometer reveals that despite a strong global economy and near full employment, a majority of respondents in every developed market do not believe they will be better off in five years’ time, and 56 percent believe that capitalism in its current form is now doing more harm than good in the world.

“We are living in a trust paradox,” said Richard Edelman, CEO of Edelman. “Since we began measuring trust 20 years ago, economic growth has fostered rising trust. This continues in Asia and the Middle East but not in developed markets, where national income inequality is now the more important factor. Fears are stifling hope, and long-held assumptions about hard work leading to upward mobility are now invalid.”

The concerns are wide-ranging and deep. Most employees (83%) globally are worried about job loss due to automation, a looming recession, lack of training, cheaper foreign competition, immigration and the gig economy. Fifty-seven percent of respondents worry about losing the respect and dignity they once enjoyed in their country. Nearly two in three feel the pace of technological change is too fast. And there is no agreed-on truth; 76% say they worry about fake news being used as a weapon. 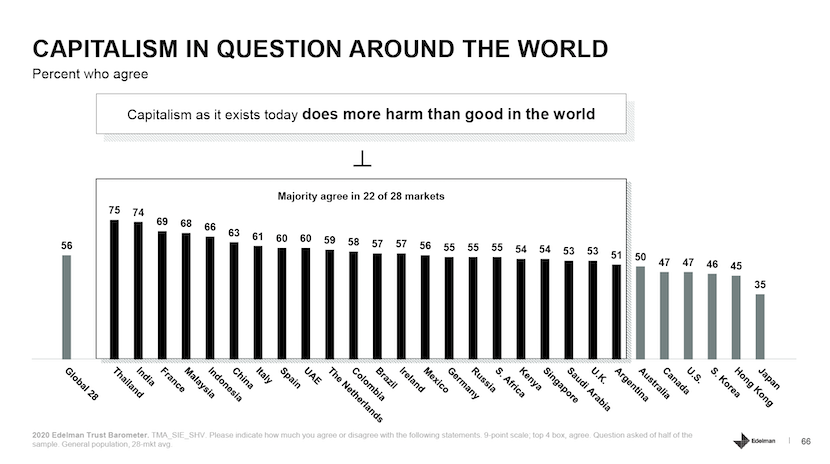 A record number of countries are experiencing an all-time high “mass-class” trust divide, spreading from developed into the developing world. Globally, there is a 14-point gap between the informed public (65) and the mass population (51). There are double-digit gaps in 23 markets, including Australia (23 points), France (21 points), Saudi Arabia (21 points), Germany (20 points), the UK (18 points) and Spain (17 points).

Business (58 percent) is the most trusted institution, taking the lead role in global governance. The recent decisions by the Business Roundtable to endorse a stakeholder model for American multinationals, the initiation of Business for Inclusive Growth focused on fair wages by French multinationals and the Business Ambition for 1.5°C recognise the broader responsibility of the corporation.

“Business has leapt into the void left by populist and partisan government,” said Edelman. “It can no longer be business as usual, with an exclusive focus on shareholder returns. With 73% of employees saying they want the opportunity to change society, and nearly two-thirds of consumers identifying themselves as belief-driven buyers, CEOs understand that their mandate has changed.”

CEOs are expected to lead from the front. Ninety-two percent of employees say CEOs should speak out on issues of the day, including retraining, the ethical use of technology and income inequality. Three-quarters of the general population believe CEOs should take the lead on change instead of waiting for government to impose it.

“People’s expectations of institutions have led us to evolve our model for measuring trust,” said Edelman. “Trust today is granted on two distinct attributes: competence (delivering on promises) and ethical behaviour (doing the right thing and working to improve society). It is no longer only a matter of what you do – it’s also how you do it.” 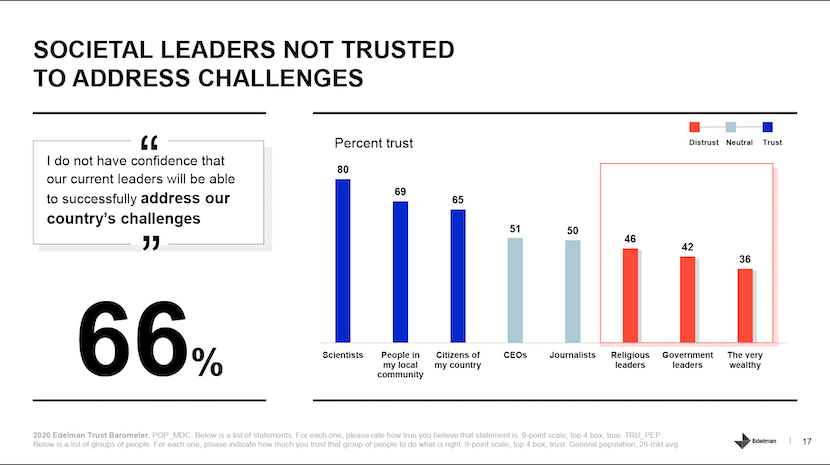 This year’s results reveal that none of the four institutions is seen as both competent and ethical. Business ranks highest in competence, holding a massive 54-point edge over government as an institution that is good at what it does (64% vs. 10%). NGOs lead on ethical behaviour over government (a 31-point gap) and business (a 25-point gap). Government is perceived as both incompetent and unethical but is trusted more than twice as much as business to protect the environment and close the income inequality gap. Media is also viewed as incompetent and unethical: a majority (57%) don’t believe the media does a good job of differentiating opinion and fact but find them invaluable on covering news (58%).

“After tracking 40 global companies over the past year through our Edelman Trust Management framework we’ve learned that ethical drivers such as integrity, dependability and purpose drive close to 76% of the trust capital of business, while competence accounts for only 24%,” said Antoine Harary, president of Edelman Intelligence. “Trust is undeniably linked to doing what is right. The battle for trust will be fought on the field of ethical behavior.”

Other key findings from the 2020 Edelman Trust Barometer include: