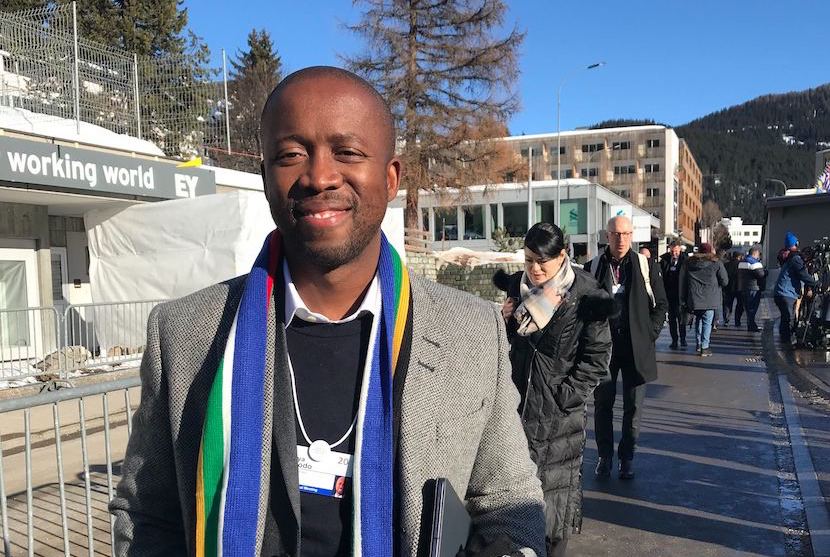 After a turbulent period in which Old Mutual shares fell sharply because of its protracted battle with Peter Moyo; the insurer managed to get a favourable outcome from courts this month when it was granted permission to sever ties with its former chief executive officer. Old Mutual sacked Moyo citing a material breakdown in trust and confidence and barred him from its offices. There was also an embarrassing incident when an unhappy KwaZulu-Natal family brought a body of a loved one in a bag to an Old Mutual branch to settle a funeral policy. Old Mutual’s Managing Director for Wealth and Investments, Khaya Gobodo told Biznews at Davos in Switzerland that the company was now able to look forward. Referring to the government’s investment drive at Davos, Gobodo says the rate of change is too slow. Policy articulation is better under Ramaphosa… but the government is far behind in execution.” – Linda van Tilburg

This coverage of the global conversation on change is brought to you by BrightRock, the first ever needs matched life insurance that changes as your life changes.

I think the board took very decisive action and took a very strong view on their obligations to shareholders and other stakeholders. The judgment clearly vindicates this. I know both parties very well and it’s unfortunate that it got to where it’s gotten too.

So you’re looking for a new CEO now?

Yes. This paves the way that allows the Old Mutual board to start conducting a process for a permanent CEO. The entire organisation – all 32,000 staff, all its stakeholders, its clients – look forward to the day when there’s absolute certainty around the leadership of the organisation. Having said that it’s been in excellent hands. Iain Williamson and the executive team – of which I am part – have done an excellent job in managing the business under what is clearly very challenging times, in terms of the economy and the challenges South Africa’s facing, as well as the turbulence and turmoil created by this noise.

You’re now in Davos, part of the South African delegation trying to sell South Africa as a destination, how do you think that’s going?

It’s always gonna be a tough sell. The minister put it very well, don’t sugar coat it because when you sugar coat you invariably trip on your own words and people see straight through that. Our obligation is two-fold. One is to make sure people genuinely understand South Africa, because in my own view we make the mistake of only selling the rate of change story. In other words this is where we are today this is where we expect to be in six months time. What we don’t spend enough time talking about is the current status. In other words we have an extraordinarily well functioning financial system which is attractive for many allocators of capital. We have high quality businesses that operate in South Africa. World Class. We have a tax system that’s well understood and clear, we have a regulatory system where in court you have a legitimate expectation of a fair hearing. We have all those things going for us so there are practical enough reasons to allocate capital to South Africa. What’s very difficult is the rate of change. In other words the policy articulation is much better under the current administration and the leadership of our president Cyril Ramaphosa, however we are far behind in terms of execution against that policy and that’s just the truth. I mean, it’s not nice to say it out loud but it happens to be the truth.

Do you think the steps are being taken to accelerate?

I certainly hope so. As an individual who has the incredible privilege and responsibility of looking after a business like Old Mutual Wealth and Investment, I’m not close enough to the detail around the decisions that are being made around execution. All we can do is observe and in terms of observation points, not enough has yet been done. Not enough proof points on the scoreboard and unfortunately that’s just the reality. I guess if I were delivering a message to our leadership, we’ve got to put the runs on the scoreboard. The game is clear. We’ve set the rules. We understand what we’ve got to do. We’ve articulated it very well but we’ve got to put the runs on the scoreboard and not enough of that is happening at this stage.

I think one of the most significant places to start is the state owned enterprises. They are important in catalysing economic activity, they are important in supporting economic activity, they’re important in the infrastructure space – energy provision – and many of them are simply not in a good financial and operational state. Eskom being the most significant of them all. Our ability to resolve Eskom means getting the balance sheet in order, it means getting a cost structure which creates sustainability, it means dealing with the rolling blackouts. That’s probably a very inflammatory word to use but we need to provide certainty in terms of electricity generation. If you’re sitting in Switzerland or the US and you’re considering a billion dollar investment in permanent infrastructure that requires electricity, until you can demonstrate to me that this is resolved, you’re simply stacking the deck chairs. The other thing about resolving Eskom is that it reduces the pressure on the fiscus. So you deal with that one and in many respects you demonstrate your ability to execute.

Companies like yours, what do you do to mitigate the risk in South Africa? Do you expand what you do overseas? Is that what Old Mutual’s doing?

In fact Old Mutual is doing the exact opposite. Managed separation was a strategy around bringing Old Mutual back to Africa and so we’ve not only re-domiciled in Africa we’ve focused our capital allocation decisions, we focused our strategy on the African continent, of which South Africa is a key part, and so we’re unlikely at this early stage – given that we listed in June of 2018 – to be making dramatic decisions around international expansion. So South Africa has to work, as well as the broader continent.

Khaya Gobodo, thank you so much.