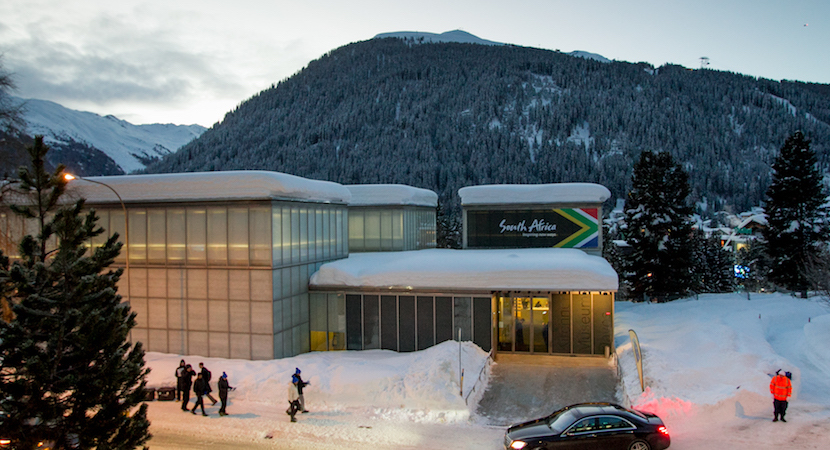 JOHANNESBURG — Optimism on South African streets was ignited on the 18th of December 2017 when Cyril Ramaphosa was elected ANC president. And that excitement has been carried to Davos. But there is still a lot of hard work that is needed to be done to evolve this optimism into realistic change. Biznews founder Alec Hogg, spoke to Winslyn’s Divan Botha, for an update from Davos. – Stuart Lowman

Alec, let’s get straight to the point. It’s your 15th time. You say that 2018 is going to be extraordinary. Why is that the case?

Well I’ll tell you. It’s really going to be extraordinary for so many reasons but specifically today, I’m sitting there minding my own business – sending stuff through to Biznews – and here comes Cyril Ramaphosa with his ‘aanhangers’. He stops and has a little chat, shakes hands with a big smile (he looks a bit tired but he’s working hard) and it’s really good. It’s the first time – ever – in all of those 15 years, that a South African President has bothered to make a connection.

Yes, it’s a cohesive group this year (as it was last year, by the way). It’s the most cohesive group we’ve had since 2010. For the 2010 FIFA World Cup, business and government pulled as one. Since then, I’m afraid it’s gotten worse and worse. We’ve fallen off the table but this year, Team South Africa is back as a cohesive unit.

Yes, it does – that South Africa is mindful of the mistakes it’s made. We really are bottom of the pile here, Divan. I’ll have you know people aren’t mad about us. They believe South Africa is kind of propping up the rest of the world when it comes to trust and economic growth, etcetera. They know things have been going wrong in our country. The message though is that we’re about to put things right.

What I’d like to know is what are the rest of the attendees saying? How is our message being received?

Unfortunately, the big news here of course is Donald Trump. Then you’ve got Macron. Then you have all the other stars. We even have Cate Blanchett and Elton John here. Unfortunately, against that, South Africa is going to have to work hard to get back onto the stage.

Let’s talk about Donald Trump. It’s the first time in (I think) two decades that we’ve got an American President there. Is there any expectation as to what he’s going to say?

It would be really good because after that book Fire and Fury by Michael Wolff, which paints him as a moron/idiot, you’ve got half the people – roughly – who are expecting him to make a complete fool of himself and the other half of the people are saying, “No, it’s going to be scripted and he’s going to go according to the script” that some pretty competent advisors around him give to him to do. The question is, is he going to take questions afterwards? Most people are thinking he won’t.

Alec let’s get back to Africa and sub-Saharan Africa specifically. We see that the Zimbabwean President (specifically) said, “I’m going to ditch the African Union and I’m going to rather attend Davos.” Is that significant?

Very. The new President of Zimbabwe has instilled in the Zimbabweans even more excitement than Cyril Ramaphosa’s election as ANC President has done for us South Africans (and we know how excited we are). It’s incredible. I have a lot of Zimbabwean friends who come here from different parts of the world. One of our contributors to Biznews (Martin Ganda) was actually talking to me yesterday and he says, “The spirit in the camp in Zimbabwe could hardly be better.” They’ve got a big investment conference in Zurich on Friday after President Mnangagwa has his say. I’m still trying to get to see him – to get an interview with him –  because I think this is going to be one of the big newsmakers of 2018 for our region.

So, I’m not sure how long Cyril Ramaphosa is still in Davos but if you were part of his delegation and you could give him some advice after you’re feeling what the vibe is like at the moment, what’s your advice to the South African delegation?

Look, Cyril doesn’t need advice from me, I can tell you. Last year he came off the bench. It was like two or three days before Davos that he was drafted in, when Jacob Zuma decided to step out and he acquitted himself magnificently. I remember writing at the time that he was ‘presidential’. He’s going to be doing exactly the same thing this year. He’s already taken control. He will be getting a press conference to the world media on Thursday. We’re expecting him to give the story that ‘yes, we’ve made mistakes but give us a chance. We’re going to get it right again.’ We have many people with skills around the world who want to come home and he’s going to open the doors. It’s exciting times, Divan. It’s very exciting times. You’ve just got to get past this mental block. Of course we’re a young democracy. We’ll come back on course. That’s the message I would suggest he use.

Alec, thank you so much.