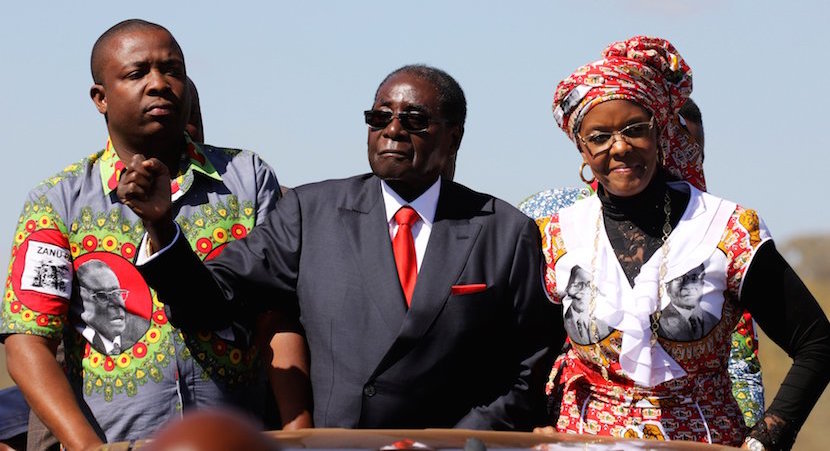 JOHANNESBURG — The ongoing crisis in Zimbabwe took another twist overnight as the military in that country moved to seize power in a bid to rid “criminals” around President Robert Mugabe. Zimbabwean troops have also taken over the country’s state broadcaster from where military spokesperson Maj Gen SB Moyo addressed the nation. It’s unclear at this stage whether this is a full-blown coup, but the situation looks ominous. While Moyo said that Zimbabweans can move freely and carry on with their usual business in Harare, reports indicate that troops have also been deployed across the city. This latest development follows Mugabe’s recent firing of his deputy president in a political purge seen to open the way for his wife Grace Mugabe to succeed him. The military, irked by the move, issued a rare statement earlier this week in which it said it would not hesitate to step in and “protect the revolution”. Two questions will emerge from this latest development. Firstly, has Mugabe’s grip weakened significantly on the military and, secondly, what will South Africa do? Considering the close relations between South Africa and Zimbabwe, this could spark off a regional crisis. – Gareth van Zyl

(Bloomberg) — The armed forces seized power in Zimbabwe after a week of confrontation with President Robert Mugabe’s government and said the action was needed to stave off violent conflict in the southern African nation that he’s ruled since 1980.

The Zimbabwe Defense Forces will guarantee the safety of Mugabe, 93, and his family and is only “targeting criminals around him who are committing crimes that are causing social and economic suffering in the country in order to bring them to justice,” Major-General Sibusiso Moyo said in a televised address in Harare, the capital. All military leave has been cancelled, he said.

Denying that the action was a military coup, Moyo said “as soon as we have accomplished our mission we expect the situation to return to normalcy.” He urged the other security services to cooperate and warned that “any provocation will be met with an appropriate response.”

The action came a day after armed forces commander Constantine Chiwenga announced that the military would stop “those bent on hijacking the revolution.”

As several armoured vehicles appeared in the capital on Tuesday, Mugabe’s Zimbabwe African National Union-Patriotic Front described Chiwenga’s statements as “treasonable” and intended to incite insurrection. Later in the day, several explosions were heard in the city.

The military intervention followed a week-long political crisis sparked by Mugabe’s decision to fire his long-time ally Emmerson Mnangagwa as vice president in a move that paved the way for his wife Grace, 52, and her supporters to gain effective control over the ruling party. Nicknamed “Gucci Grace” in Zimbabwe for her extravagant lifestyle, she said on Nov. 5 that she would be prepared to succeed her husband.

Due to ongoing uncertainty in Zimbabwe, the U.S. Embassy in Harare will be minimally staffed and closed to the public on November 15.  Embassy personnel will continue to monitor the situation closely. @StateDept

The events unfolded as Zimbabwe is in deep crisis. The economy has halved in size since 2000 and the nation has no currency of its own, using mainly the dollar as legal tender. Lines of people waiting to make bank withdrawals snake around city blocks in Harare. Some sleep in the streets to ensure they’re served. An estimated 95 percent of the workforce is jobless and as many as 3 million Zimbabweans have gone into exile.

The country is now under military rule, said Alex Magaisa, a Zimbabwean law lecturer who is based in the U.K. and helped design Zimbabwe’s 2013 constitution.

“When you see a man in uniform reading news on national television, you know it’s done,” he said in a text message. “There are no more questions. Authority is now in the hands of the military.”

Mnangagwa, who said he fled Zimbabwe because of threats against him and his family, had been a pillar of a military and security apparatus that helped Mugabe emerge as the nation’s leader after independence from the U.K. in 1980. He was Zimbabwe’s first national security minister.

Mnangagwa’s dismissal signalled Mugabe’s break with most of his allies who fought in the liberation war against the white-minority regime of Rhodesia, leaving his wife’s so-called Generation-40 faction of younger members of the ruling party in the ascendancy.

While Zanu-PF named Mugabe as its presidential candidate in elections next year against a possible seven-party opposition coalition, he’s appeared frail in public, sparking concern among his supporters that he wouldn’t be able to complete another five-year term.

Moyo, in the statement, told members of parliament that the military’s “desire is that a dispensation is created that allows you to serve your respective constituencies according to democratic tenants.”

Elections probably won’t be held as scheduled, Rashweat Mukundu, an analyst with the Harare-based Zimbabwe Democracy Institute, said by phone.

“The military is going to determine the shape of Zimbabwean politics, although they’ve tried to say this is not a coup,” he said. “This may result in the creation of a new unity government which will involve the opposition.”

Statement from the Zimbabwe Defence Forces

Fellow Zimbabweans, following the address we made on 13 November 2017 which we believe our main broadcaster, ZBC and The Herald were directed not to publicise, the situation in our country has moved to another level.

Firstly, we wish to assure the nation that His Excellency, The President, of the Republic of Zimbabwe, Head of State and Government and Commander in Chief of the Zimbabwe Defence Forces, Cde R.G Mugabe and his family are safe and sound and their security is guaranteed. We are only targeting criminals around him who are committing crimes that are causing social and economic suffering in the country in order to bring them to justice.

As soon as we have accomplished our mission we expect that the situation will return to normalcy.

To the civil servants: As you are aware, there is a plan by the same individuals to influence the current purging taking place in Zanu PF to the Civil service. We are against that act of injustice and we intend to protect everyone of you against it.

To the judiciary, the measures underway are intended to ensure that, as an independent arm of the state, you are able to exercise your independent authority without fear of being obstructed as has been the case with this group of individuals.

To our Members of Parliament: Your legislative role is of paramount importance for peace and stability in this country and it is our desire that a dispensation is created that allows you to serve your respective political constituencies according to democratic tenets.

To the generality of the people of Zimbabwe: We urge you to remain calm and limit unnecessary movement. However, we encourage those who are employed and those with essential business in the city to continue their normal activities as usual. Our wish is that you enjoy your rights and freedoms and that we return our country to a dispensation that allows for investment, development and prosperity that we all fought for and for which many of our citizens paid the supreme sacrifice.

To political Parties; We urge you to discourage your members from engaging in violent behaviour.

To the youth: We call upon you to realise that the future of this country is yours. Do not be enticed with dirty coins of silver, be disciplined and remain committed to the ethos and values of this great nation.

To all Churches and religious organisations in Zimbabwe: We call upon you and your congregations to pray for our country and preach the gospel of love, peace, unity and development.

To both our people and the world beyond our borders: We wish to make it abundantly clear that this is not a military takeover of Government. What the Zimbabwe Defence Forces is doing is to pacify a degenerating political, social and economic situation in our country which if not addressed may result in violent conflict.

We call upon all the war veterans to play a positive role in ensuring peace, stability and unity in the country.

To members of the Defence Forces: All leave is cancelled and you are all to return to your barracks with immediate effect.

To our respected Traditional leaders: You are the custodians of our culture, customs, traditions and heritage and we request you to provide leadership and direction to your communities for the sake of unity and development in our country.

To the other Security Services: We urge you to cooperate for the good of our country. Let it be clear that we intend to address the human security threats in our country. Therefore any provocation will be met with an appropriate response.

To the media; we urge you report fairly and responsibly.