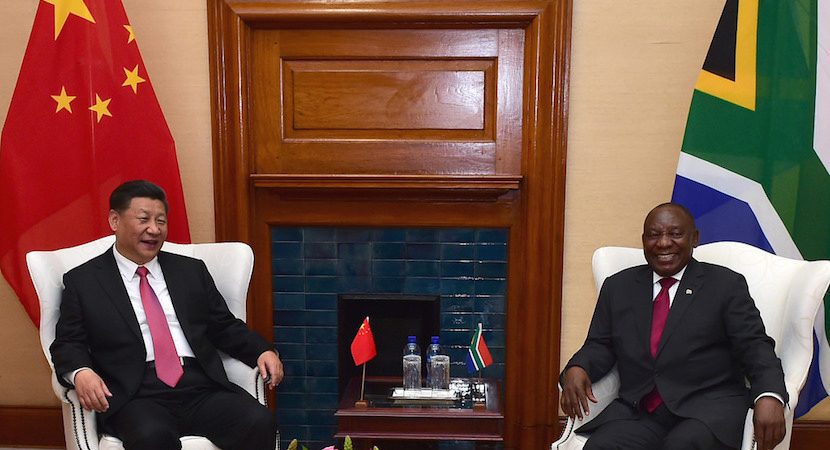 LONDON — There is little mystery to the ingredients required for a successful economic system. The structure promoted by the US’s founding fathers created the most efficient way to deliver goods and services while simultaneously unleashing human potential. That catapulted America’s share of the world’s economic pie from 0% to its current 25%, five times the natural share its share of global population would imply. After decades of an oppressive political ideology that took it out of any wealth-creating/poverty-elimination race, China started market-driven reforms in 1978. In the decades since, the Middle Kingdom’s economy has mushroomed to the point it is so now serious a competitor that American president Donald Trump regards it as an “existential threat”. After a successful Forum On China Africa Co-operation (FOCAC) gathering in Beijing this month, new South African president Cyril Ramaphosa has very obviously hitched his nation’s wagon to the Chinese locomotive. He returned with a $25bn financial commitment from his nation’s new best friend to fund the economic restructuring SA desperately needs. The response from local pundits has been mixed. So I asked perspective from John Mulcahy, a former journalistic colleague who now chairs a multinational corporate headquartered in Cape Town. Mulcahy has been intimately involved in China since 1985, but being SA born and bred, he has a unique vantage point. In brief, Mulcahy reckons the Chinese support is welcome – but only if Ramaphosa, the investee, negotiates the terms as cannily as the Chinese national investor always does. – Alec Hogg

It is difficult not to be impressed and energised by the scale and apparent commitment of the China initiative in Africa, especially against the backdrop of (at best) disengagement by the US, and self-absorption by Europe. South Africa’s share of China’s “largesse” is a matter of particular interest.

There is no free railroad in international relations, and it is consequently wise to view China as a sharp and hungry investor rather than as a generous uncle.

The headline “China gifts SA with R370bn” is in itself disturbing, and reassuringly is not reflective of the underlying article in the Mail & Guardian. The Chinese commitment to South Africa seems to be in the range of $25bn, but there is a mix of investments and loans – there are no hand-outs in case anyone was so informed.

But that doesn’t mean there can’t be mutual benefits. China is not seeking to deploy its liquid balance sheet around the world – indeed, it is grappling with a mountainous domestic debt (approaching $30 trillion) and a wobbly stock market – so the commitment to Africa has other dimensions.

As with shrewd investors anywhere, China will not enter the front door without knowing which exits it can use. One way is for SA (and other African borrowers) to service the debt according to the covenants. History suggests that may not be a slam-dunk to say the least.

The lending or investment terms may not be usurious, and China does not appear determined to convert Africa to its own ideology or to tinker too directly with the domestic politics (“Let’s agree to stay out of each other’s sensitive areas, like human rights and free speech” is more or less the deal).

But nor is Beijing naïve, and the reality is that China is nowhere near self-sufficient in a range of vital commodities, from energy and rare earths to potable water. To be fair to President Ramaphosa, he has made the point that the economic colonialism evident in China’s beneficiation of Africa’s natural resources is not an acceptable model, but he needs to be a canny investee, just as China is a shrewd investor.

Can we expect a statement along these lines at some point in the future: “The good news is Medupi Power Station is finished; unfortunately it is now owned by the China Development Bank?” Wouldn’t you like to know the terms on which ESKOM borrows from anyone, never mind China?

More broadly, the message President Ramaphosa and his team seems to have brought from the gathering in China is that SA will follow the China model.

So far, so good, but what is meant by the China model?

Some basics – a key element of China’s early success in this almost 40-year “experiment” was VERY cheap labor. In 2017 China’s average manufacturing wage was about CNY65,000 a year, or US$10,000. This had risen more than 100x from 1980. It is not a popular topic, but labour rights were not at the top of the agenda during China’s manufacturing boom from the 1980s onwards.

China are basically international micro-lenders. Probably took their business model from the SA black market. "End of the month? Need a loan? No problemo, just sign here. Also, that will be 200% interest and, if you don't pay, we sending some chaps around for your car."

As the economy has grown the skills and qualifications drove China’s labour force up the curve, and China evolved out of the low-cost labor model into a more nuanced economic offering. But the images of labour exploitation in China are almost cliched.

Is this stage of China’s economic miracle part of Ramaphosa’s roadmap? Probably not, but how will the preferred model mobilise, incentivise and reward the masses? If it is putting them to work in factories or other productive employment what is the business model for these labour-intensive industries?

China’s next critical step, which is still front and centre, was urbanisation. In 1950 around 20% of China’s population lived in cities. That proportion is now above 50% and headed for 60% by 2020 and ultimately to 70%.

It is in that context that China’s more recent infrastructure-led economic development policies should be read. China has created an urban infrastructure for 500m people in the past 40 years, and it is expecting a further 250-300m people to move to cities in the next 20 years.

South Africa has also seen dramatic urbanisation over the past three decades, a process that accelerated after 1994, but unlike in China these migrants have not been absorbed into rapidly industrialising cities in remotely requisite scales.

Unemployment is a blight on South African cities, and investment in infrastructure will certainly generate economic activity, but the question is whether it will invoke a lasting economic transformation such as China has experienced.

My own observations from the initial and subsequent phases of China’s extraordinary economic transformation is that the pivot from a centrally-planned and State economic monopoly to a model much closer to the market (albeit in a de facto one-party State) has “genie out of the bottle” characteristics.

#RamaphosaQandA: 'We have not sold SA to the highest bidder' pic.twitter.com/nAgCZ29ZyR

By easing or lifting controls on the market China ignited enterprise on a massive scale, underpinning a prolonged growth phase exceeding 6% a year. This is the base level of growth required by newly emerging markets to absorb new entrants to the labour market.

That energy for the rewards of enterprise has been a critical ingredient in China’s success.

It will be necessary for the South African leaders to inculcate equivalent confidence into the populace as a precursor for a high-energy; high-growth phase. The fruits of freedom have been unevenly spread and arguably more modest than justified. But what about this new initiative, “sponsored” by China, will change the reality for the most deprived, and also lay foundations for South Africans to build a prosperous future?

China could be a good friend in building such a future, but it will require careful management and efficient execution from the South African side.