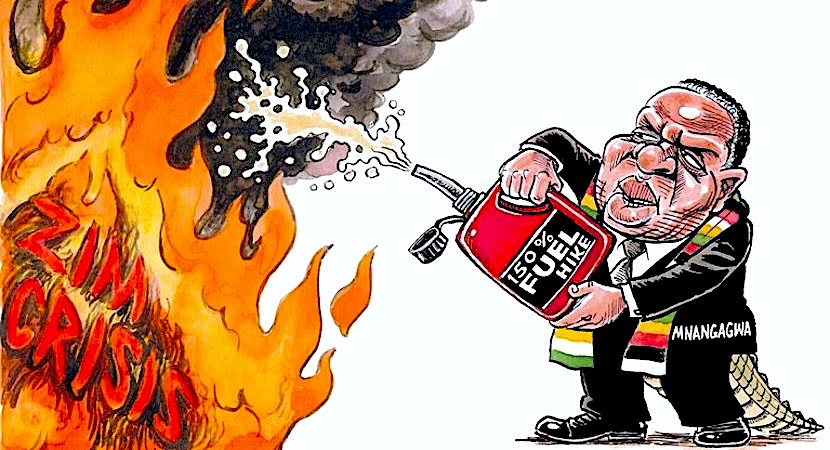 CAPE TOWN — Aristotle once said; “Poverty is the parent of revolution and crime.” We’re seeing both in Zimbabwe right now. The crowds that poured into Harare’s streets in protest at massive petrol price hikes recently showed almost no fear, in spite of 12 people, all but one of them protestors, being killed by soldiers and police, and 78 surviving bullet wounds, with over 280 injured. The quotes from one jobless, hungry protestor in the piece below sums it up; disinhibition, driven by disillusion and desperation enable almost anything. Wealth is not vulgar (unless amassed by a tiny minority at the expense of the majority), but poverty certainly is, given that with proper economic management and democratic policies, it’s entirely avoidable. Piers Pigou, the Brussels-based International Crisis Group’s senior consultant for southern Africa, says it straightforwardly; a military crackdown will not put the genie back in the bottle. Yet South Africa’s ruling party insists on continued blind loyalty to Zanu-PF, urging the world to lift economic sanctions, for “the people’s sake.” As we well know, that’s not the reason sanctions were lifted on South Africa. It was a quid pro quo for political change. – Chris Bateman

(Bloomberg) – In four decades of independence, Zimbabwe’s rulers have been able to deploy the security forces to crush protests even as the southern African nation sank deeper into economic crisis. Judging from the latest bout of unrest, that may no longer be true.

Crowds showed little fear as they poured onto the streets of the capital, Harare, and other major cities when the main labour federation called a three-day stay-away this month after fuel prices were more than doubled. The army’s response to the worst rioting since 1995 claimed the lives of at least a dozen people, and gunshot wounds accounted for 78 of the about 360 injuries.

Fuelling the anger of young people – three-fifths of Zimbabweans are under 25 – is a sharp decline in buying power of mostly unemployed urban residents and shortages of everything from gasoline to bread. Most are too young to remember Robert Mugabe and his Zimbabwe African National Union-Patriotic Front leading the country to independence from the UK in 1980.

“People struck and looted because they are hungry,” said Abel Moyo, an unemployed 27-year-old in the northern town of Chinhoyi. “The people are poorer now than before independence. What have we been liberated from? Wealth?”

Part of the new-found boldness may date to the fall of Mugabe, who ruled Zimbabwe with an iron fist for almost 40 years before the military toppled him in late 2017 and installed Emmerson Mnangagwa as his successor. While tanks controlled the streets, people swarmed around and took selfies with the soldiers. He then led the party to election victory less than a year later.

While the military intervention shattered the mystique of Mugabe and Zanu-PF, Mnangagwa’s promises of a “new Zimbabwe” with better living standards and political freedom have fallen flat: the nation’s gripped by the worst economic crisis in a decade and the army has replaced the police in clamping down on protests.

While a quarter of the population has emigrated, the number of people in cities is being swelled by a drift from rural areas threatened by drought.

“Younger people, particularly in urban areas, are prepared to take more risks. They are deeply disaffected and marginalised young men and women who are ripe for protesting,” said Piers Pigou, the Brussels-based International Crisis Group’s senior consultant for southern Africa. “You saw this manifest in the extent of the criminal violence that took place. People are prepared to take the next step.”

Since Mnangagwa took power, inflation has surged to 42%, the highest since 2008 when it soared to 500 billion percent and prompted the government to abolish its own currency.

Even though Zimbabwe now mainly uses the dollar, an absence of cash has led to shortages of goods and a series of strikes. Some workers are refusing to accept electronic payments, which trade at a steep discount to cash dollars on the black market.

That’s exacerbated hardship for the urban poor, and public anger has been further inflamed by a crackdown that saw soldiers fire live ammunition. For many, the wealth of the elite connected to the ruling party has been the trigger.

“We have nothing and they have everything,” said Effort Musandu, a 34-year-old gas station attendant in Harare. “Have you ever seen a Lamborghini in a fuel queue? Because I have. And Bentleys. They all belong to people with Zanu connections. For us? We must walk.”

While a heavy military presence has quelled the protests for now, it’s unlikely to stay calm for long, said Pigou.

“While the state can contain it, you can’t just put that stuff back in the bottle,” he said. “The pot will keep boiling.”