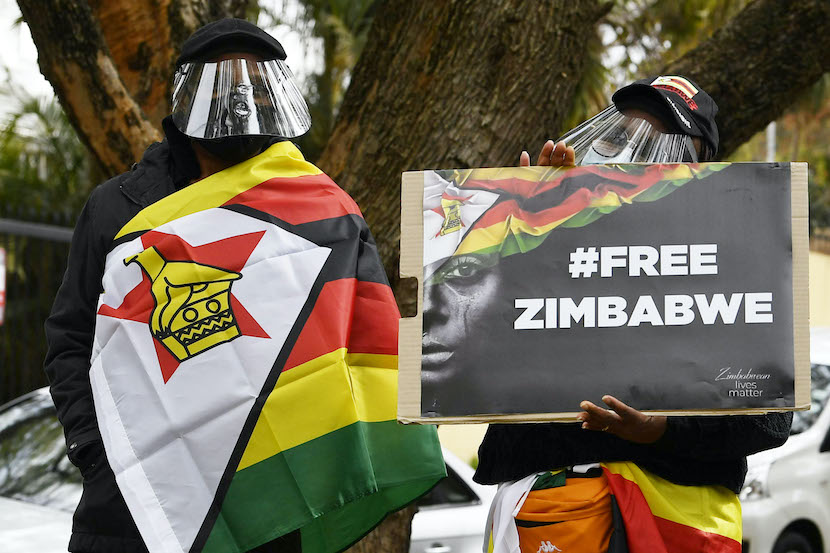 Forty years of promising free education for Zimbabwe’s children and still the politicians keep making them, as if somebody, somewhere, will eventually believe them. This while children of five years or younger toil with their owner-parents on resettled tobacco farms because nobody can afford labour. Inflation is at 207%. Yet, on the rural surface, to the casual observer, life goes on as it has for centuries. Cathy Buckle in her inimitable pantheistic way sketches these peaceful pastoral scenes with a dark undercurrent of potential tragedy. It sometimes has you holding your breath. Like her description of children wading to herd cattle across a known crocodile-carrying river. Ironically, the scene carries more hope and less risk than Zimbabwe’s ongoing political trajectory, one that South Africa with its masochistic support of global lost socialist causes, seems intent on following. – Chris Bateman

The crocodiles will take the goats before the children

Arriving at the wide blue river crossed with swathes of golden sand, there was a feeling of overwhelming timelessness. People passed by in carts pulled by donkeys or oxen; children wielding thin hide whips to steer the animals; young children in charge of watching over the family’s cattle grazing on the roadsides; a tiny little boy, perhaps five years old, running after goats that had escaped onto the road. The water level in the big river was dropping fast, disappearing into the thick sand but in other places there were wide, deep, fast-flowing channels, which made crossing from one side to the other a hazardous affair. In the distance on a newly emerging sand spit there was a big flock of waterbirds, storks perhaps, or ibis.

It was a hot day under a bright blue sky but winter is already in the air, temperatures dropping, days getting shorter. A group of youngsters were swimming in the shallows of the river. I felt nervous for them, I couldn’t see any crocodiles but felt sure they would be there. When I asked a woman not so long ago if she thought it was safe for the children to swim in the river, she said the crocodiles would take the goats drinking at the river bank long before they took the children. I wasn’t so sure because we hear of crocodile attacks all the time in Zimbabwe. Just a fortnight ago, a 13-year-old girl was taken by a crocodile one afternoon, watched by her eight-year-old sister when they were bathing in the shallows in the Hunyani River.

At the sound of cowbells in the distance, my attention was drawn to two young teenagers, a boy and a girl, starting to cross the river from the far bank with a herd of cattle. Twenty or more big animals with large curved white horns set out into the river bed, through sand, then shallow water and then into the deep fast-flowing channel. The cattle looked huge compared to the youngsters who had only a thin stick to guide the animals or protect themselves. The herd split, one child went after them while the other carried on with about 10 cows in front of her. The water was deep, the girl was up to her chest, her stick above her head. I held my breath, willing her safe passage and no crocs and then at last she was across, the cattle safe and the other group not far behind. I breathed again.

It wouldn’t be long, perhaps a week or two, before there would be more sand than water in this river and then the picture would change all over again. The hazards for the children are so real here and might get less as the river drops but the chores will get heavier; carrying water in buckets, walking further to find grazing, carrying firewood, working in the fields, finding food. This is everyday life for millions of children in Zimbabwe: no electricity, no piped water to be able to shower at home and endless chores. A news report last week described the sharp increase in child labour as the economic situation in Zimbabwe continues to decline. Inflation is now pegged at 207%, unsurvivable for most families, leaving parents unable to even afford school fees. We are back in the circumstances of 2005–2008 when school fees increase every term or every month and are quoted in hundreds of thousands or even millions of dollars. Teachers can’t cope on meagre wages, parents can’t cope with million-dollar school fees and so the children just fall by the wayside, doing whatever is needed to help their families survive. It’s no better on the resettled tobacco farms either where news reports say, “children as young as five work in the fields with their parents”, because the new farmers cannot afford to employ labour.

Meanwhile, grand promises ahead of next year’s general elections have already started, including this one: “Free primary education in 2023”; “the President is committed”, according to Public Services Minister Paul Mavima. Will the children herding cattle through the river, the little boy on the road with the goats, the sisters bathing in the river or the infants in the tobacco fields’ benefit from this? Do their parents remember 40 years of promises of free education made before every election since 1980? Promises never kept.