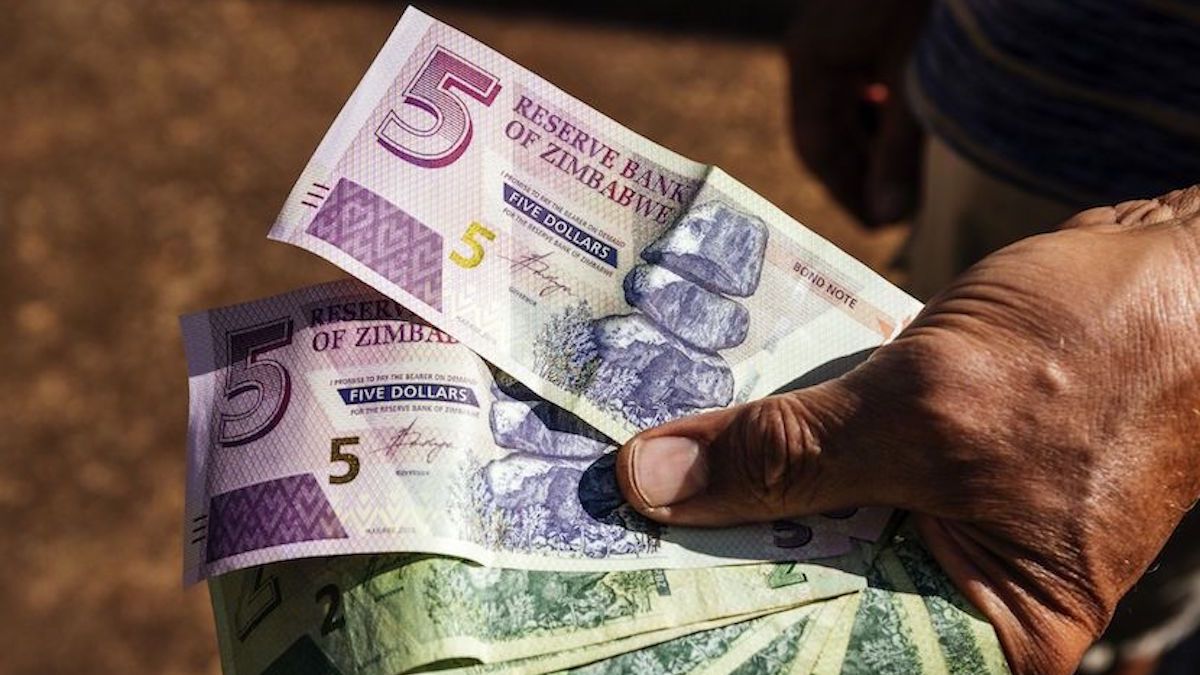 The first thing many of us do within minutes of waking every morning is to check our cellphones for the time, weather, missed calls or SMSs. This is too often followed by social media; most, if not all, before even visiting the toilet, showering or brushing our teeth. Zimbabweans also check their phones first thing in the morning but for something completely different; they look for the three main exchange rates. Often, their hearts sink. Cathy Buckle shares a reality of a current ban on bank loans and that those caring for children, disabled people or elderly parents earn 13 US cents an hour. Without access to US dollars, you’re in trouble, she says. When your daily economic forecast is the weather equivalent of permanent mist with the occasional sunny interlude, keeping your chin up requires serious fortitude. Especially when paranoia rules at the top. – Chris Bateman

Thirteen cents an hour in Zimbabwe

With my head swirling, trying to make sense of the latest economic absurdities in Zimbabwe, I set out into the mist early in the morning. Winter is coming; sunrise is at 6.14am but the mist hangs around in the valleys longer each day, hiding trees and kopjes, rocks and rivers and it often takes the sun three or four hours to burn through and let us see what’s really there. At the first corner on the path, three zebra suddenly emerged from the mist, they were grazing and looked up but didn’t run, my scent obscured in the mist but their stripes startling against rocks and golden grass.

Every morning in Zimbabwe you look at your phone first thing, not for the time, date, weather or missed calls, but for the exchange rates. Every day we have to make a note of three critical pieces of information in order to survive the latest economic crisis in Zimbabwe. As usual there’s nothing simple about it. In fact it’s about as clear as the trees and rocks hiding in the mist. There’s the RBZ (Reserve Bank) rate, the interbank rate and the street rate. The RBZ rate is the exchange rate set by government for the US dollar; the Interbank rate is the rate widely used to quote for goods and services and the street rate is just that, the amount you can get for your US dollars if you buy or sell them on the street.

In the last fortnight new ‘economic stabilisation measures’ were introduced. Appealing to the youth to expose businesses that he says are “sabotaging the economy,” President Mnagangwa said: “We are aware that there are people who are working with detractors to bring about regime change through the manipulation of our exchange rate and unjustified price hikes.”

Ho hum, here we go again; the Zim dollar lost almost 50% of its value overnight. Look at these numbers since my last Letter From Zimbabwe a fortnight ago to get an idea of how crazy everything is again (this is the exchange rate for one single US dollar to purchase Zimbabwe dollars):

The ‘economic stabilisation’ measures did the exact opposite of stabilising anything and included:

The ZCTU Secretary General, Japhet Moyo, said: “We are concerned about the nocturnal announcement of these measures without any social dialogue.” He said the ‘economic stabilisation measures’ could trigger massive job cuts.

A week later, the RBZ said the suspension of lending didn’t apply to tobacco, cotton, sugar and maize. Then, in what was called a political move to “calm a restive population”, the government announced the suspension of import duty on a number of basic commodities including salt, rice, flour, sugar, margarine, maize meal, milk powder, infant formula, tea, soap, toothpaste and washing powder. The president of the CZI (Confederation of Zimbabwe Industries) Kurai Matsheza said: “Around the whole world, economies are looking within and protecting their industries right now. Here we are doing the opposite … if you look at the value chains that are involved, they are killing our economy.”

The Buy Zimbabwe lobby group said: “This development is likely to reverse the industrialisation gains that had been made by local industry in the supply of basic commodities.”

I’m not an economist, just an ordinary citizen and all this is as clear as the mist swirling out there. All I know is that people without access to US dollars are in dire trouble. Last night the news came of new wages just set by government. Read this and weep: child minder or disabled/aged minder Z$11 025 per month (that’s US$26.20 a month at the going rate today) or Z$55.68 per hour (that’s 13 US cents an hour at the going rate today.) Thirteen US cents an hour to care for a child, disabled person or elderly parent … what kind of inhumanity is this? Shame on Zimbabwe.