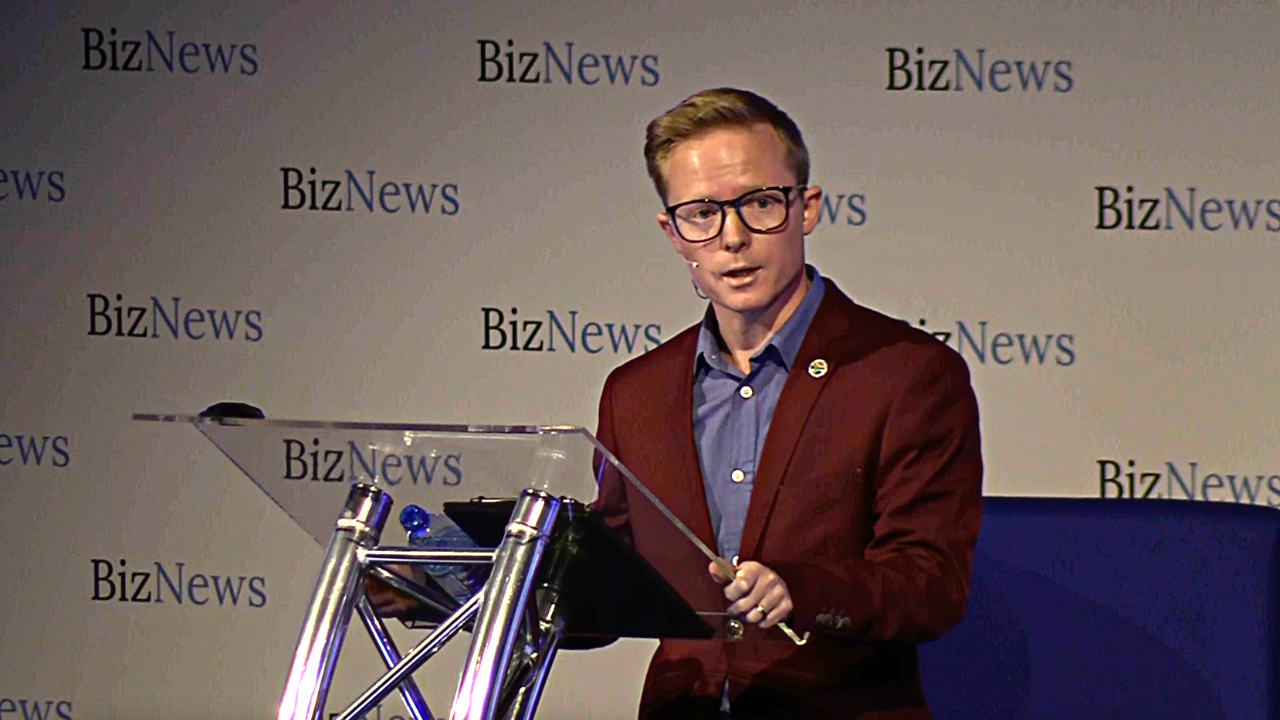 In this riveting talk at the fourth BizNews conference, mayor of uMngeni Chris Pappas, speaks about the process of being elected, the incredible things going on in the municipality as well as what they’ve managed to accomplish in the short time he’s been in office.

Many of you may have not heard of uMngeni municipality – like many non-metros, uMngeni is not very well known. The towns of Hilton, Howick, Mpophomeni, Lidgetton and Nottingham Road make up the area. We fondly know it as the KwaZulu-Natal Midlands. It is home to some 110,000 people, 75% of whom are black, 20% are white, 4% Indian and 1% Coloured, stretching for 1,500 square kilometres over the rolling interior mist belt of the KwaZulu-Natal interior. The area is 15 minutes from the capital Pietermaritzburg, and in 25 minutes, we have access to direct flights to Johannesburg. During the 1840s, travellers moved north from Pietermaritzburg and got to the uMngeni River, where they established a settlement just north of where current-day Howick is. In 1850, a proclamation came out in the Government Gazette offering for sale 36 village allotments along the uMngeni river. So marked the beginning of the town known as Howick. In choosing a name for the town, government officials decided to name it after the Secretary of State of the Colonies in London. So it’s a very colonial history. They derived the name from his ancestral home of Howick because he was named Lord Howick. The Isizulu name for the area is KwaNogqaza, the place of the tall one, named after the 95-metre Howick Falls. The municipality is bisected by the N3 and is home to some of South Africa’s most prominent private schools. Michaelhouse, St Anne’s School for Girls, Madrasa An Noor, which is the largest school for the blind, which is also adjacent to St John’s Theological College, Cedara Agricultural University and Clifton Preparatory and of course, the best school in South Africa, Hilton College.

On the statistics of uMngeni

The boring statistics. uMngeni has a budget of R540m, with R1.2bn worth of assets. and we are the fastest developing municipality in South Africa despite being 32nd biggest municipality in terms of population and 31st in terms of area in the province of KwaZulu Natal. uMngeni municipality receives the second highest number of development applications after the metro. We are also home to one of the largest rubber manufacturers in the country and the source of origin of all your Woolworths organic milk.

On who he is

I will start with a disclaimer. I’m not an expert. I am also not the spokesperson for my political party. I do not claim to know it all or have the solutions to all the problems. And I was also not brought up as a politician. What I am is a patriotic South African and a citizen of KwaZulu-Natal who has a passion for progress, a willingness to accept that compromise is not weakness. And understanding that leaders and politics in general in its current form have largely failed us. More evidently so in our local communities. I’m an active member and leader of a political party that I still believe is best placed and with the best track record to represent the rational principles centred on present and future South Africa, not without its problems. And certainly I don’t agree with every decision. I’m the son of farmers who was given a head start in life far beyond many people in my generation, mainly because of circumstance, hard work and privileged access to opportunities. But today I want to speak about three things: politics, hope and the public institution.

I would be a terrible politician if I didn’t address some of the remarks made by Paul O’Sullivan last night. And you’ll forgive me for changing my speech. The first thing is his belief that the ANC should win because the alternative – perceived chaos or corruption – will be worse than what we have now. There are many examples of governments, so called coalition governments, that have been installed throughout the country. In this room there are two examples of mayors who were elected through democratic processes and installed new governments that led to meaningful gains in service delivery and improved living conditions. The Western Cape is an example of how provinces can change hands. And in KwaZulu-Natal, municipalities have changed hands between the IFP and the ANC a number of times and even at some stage the NFP, which came and went. The fact that some coalitions are under pressure and in some cases failing is not an attack on the majority party, or parties in that coalition, or the leadership of those coalitions. Rather, it is a deliberate attack on the concept and principle of coalitions, specifically based on principle and agreements.

In most cases, this is for short term gains in power, which ultimately lead to access to resources. Secondly, I vehemently reject the defence of Mr Cyril Ramaphosa when viewed through the lens of – look at the alternatives in the ANC. The first problem here is that it is a defeatist outlook and erodes the foundations of democracy. Democracy says that we lend our power to those who do well and we take away our borrowed power from those who do not do well. Another word for this is accountability. The second problem that I have with Ramaphosa’s statement is that he is part of a collective. He has admitted on many occasions that he defends the actions of the collective. And in many cases, they said they’ll put the collective before the interests of the country. So if you believe that the ANC is a problem in the country and you believe that they are the cause of the problems, then you must also accept that Mr Ramaphosa, as part of the collective, is part of the problem. The rational thing to do would be to coalesce around what is a better, proven challenger and reject what is worse and failed.

Lastly, Mr O’ Sullivan makes a compelling case not to vote for smaller parties, pop up parties based on personalities, those that emerge suddenly and grow rapidly through populist rhetoric. Or those who are untested in government. There are a number of reasons why you should not vote for this type of party. And in Paul’s own words: go with the tried and tested (words he used to describe Ramaphosa). Having to manage a coalition with a party that has one or two seats out of 200 or 300 is a waste of time, energy, and there are a lot of better things to be able to do. And quite frankly, It abuses the principle of democracy because it gives a tiny minority a higher proportion of power then the democratic process actually produced. The better option would be to strengthen the hand of the biggest alternative to the party in power and give that party the best hand to bring about meaningful change.

On some of the successes in running the municipality

I’d like to share a couple of our successes over the last nine months. Today in Council, which is currently taking place, in my absence we will settle one of the last of three loans of R10 million. This is the second loan we are paying off since December and will save ratepayers R450,000 in interest this year. We have increased the basket of services and the number of people that we are supporting who fall into poor and vulnerable households from 133, when taking over, to over 3,050 today. This also includes increasing the threshold that people can access. So from R3,500 being the threshold to R5,000. Free basic electricity has been increased from 50 units to 150 units. And now for the first time, poor families will receive free black bags so they no longer have to choose between R70 for black bags at Pick n Pay versus living in a clean environment and having to put food on the table. All residents over 60 now qualify for a rates rebate. And if you earn R13,500 or less, you qualify for a higher rebate. So it’s a great place to retire. We have completed the municipal property valuation process in record time and in doing so decreased rate randages by 25%, introduced a Covid relief rebate and a July rights rebate, all while prices increased throughout South Africa. For the first time, the municipality entered the new financial year with money in the bank and we were able to pay Eskom one month in advance. We have recovered R25 million in outstanding debt and by doing so we have been able to increase our expenditure on maintenance from 2.5% of our budget to 6%, and we aim for the 8% Treasury recommended amount in future.

We’ve limited political interference in hiring by employing a temporary employees randomisation selection process, much to the dismay of the comrades. We have developed and adopted a number of policies. We have re-established a number of committees, including a municipal financial disciplinary board. And we have started to discipline councillors for misconduct. We have R24 million worth of equipment on its way, including four refuse compactors and excavator tip trucks, TLBs, rollers and a number of other pieces of equipment. The SPCA benefits by R250,000 a year from improved financial stability, something that has not happened for many, many years.